#27: Think about whether there should be a cut-off age for Facebook participation. My doubts about being on FB re-surfaced this weekend,  starting with an emailed spoof graphic titled “facebook in 50 years” which showed what your facebook profile will look like half a century from now. It’s called pensionbook and among the coolest features are: “poke someone with your walking stick,” a deaths listing (larger than the events listing), funeral notifications “Edgar Jones just died… would you like to attend the funeral”, and a “meals on wheels” application. 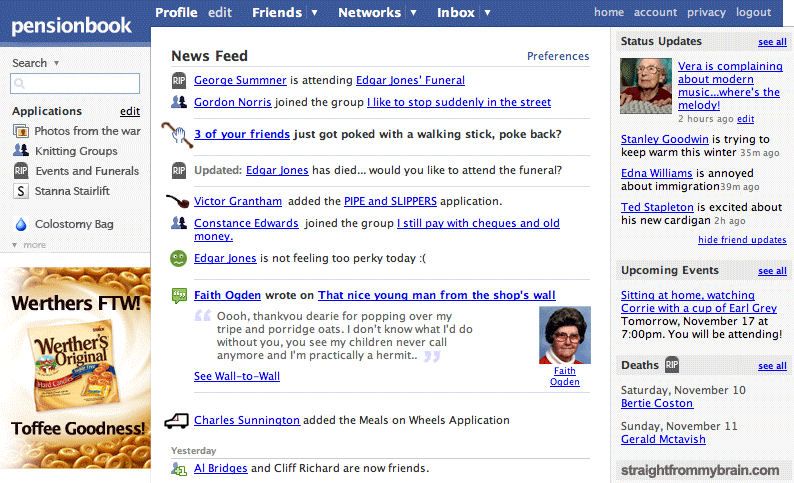 It is true that Facebook is increasingly attracting an “older” audience.

Herring said: “If I stop and think about it my life is pathetic, so generally I don’t stop and think about it. I’ve been in total denial. Which is why I buy trendy, figure hugging T-shirts. Because if I am going to deny the fact that I am old, I might as well deny the fact that I am fat as well… Reassuringly, I am not alone. While many people in their forties have families and responsibilities, an increasing minority still resemble teenagers. Scary, wrinkled, grey-haired teenagers, with some kind of terrifying premature ageing disease, but teenagers nonetheless.”

While I am with Herring when it comes to denial, I still think that some ground rules for FB participation should be put in place. So, my list…

2. Your doctor recommends that you have a prostate exam

3. You notice you have liver spots or have been diagnosed with gout,

4. You feel the need to start sharing your health problems with just about anyone

One thought on “Are you too old for Facebook?”