#21. Celebrate that no desperate measures need to be taken to secure an Olympic medal. Thank you Khotso Mokoena for taking that long jump for 8.24 metres. Kaya FM DJs were discussing plans this morning for how SA could get medals without having to rely on our Olympic Team.  One suggestion was to ensure Zimbabwean swimmer Kirsty Coventry flies home via Oliver Tambo International and receives a rousing South African welcome from the Airports Company — in short, steal her luggage because it’s got a ton of them. Another plan involved Sam Ramsamy running off with all three medals during a handover ceremony while shouting “I am taking these to Madiba”. “Who would dare stop him?”.

Now that some semblance of self-respect has returned to the nation and we can stand proud next to the great sporting nations of Togo and Tajikistan we need to discuss that Crocs issue, and ask whether sporting excellence could ever have been achieved in shoes that were designed to prevent varicose veins in fat people. 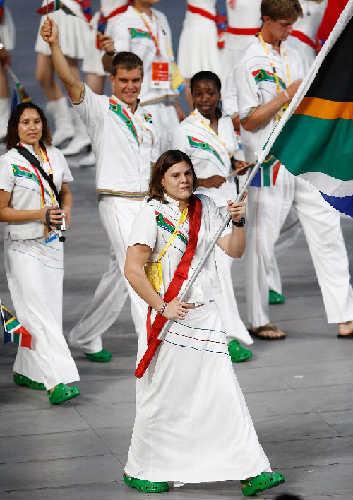 For the first few days of the Olympics I really was comforted by the idea of “personal best”. So our athletes may not be winning but at least they are improving.

Now I am so over that. Even Krygyzstan has more medals and they are a country with no vowels.

Although “personal best” is a handy term and I can see myself getting lots of use out of it in future. It’s a good way to spin a milestone. Possible deployments include: When Zimbabwe’s inflation rate goes beyond its current 11.2-million percent rise it should be thought of as a “personal best”.

3 thoughts on “Beijing Olympics has a silver lining”