#30. Secure a seat in the front row at Fashion Week for the Amanda Laird Cherry show. I joined Joburg’s fashion crowd at Sandton Convention Centre for the show last night. They were all there — skinny girls in black, supermodels showing lots of skin, fashion editors dressed to kill, blingy girls with men who looked like they had stepped off a yacht in Nice, the funky, the hip and the just plain strange. There was a buzz and for a brief moment the street outside the Convention Centre — filled on a Spring night with the champagne-drinking and smoking fashion set — had the feel of a real city.

With Spring/Summer on the catwalks, there were legs everywhere, stockinged and even tattooed, dressed up in dainty brogues and not so flattering gladiator sandals. And that was only in the entrance hall.

The show itself was super weird — jangling discordant music to start off including a few sounds that could have come straight from 94.7 Radio Highveld’s competition “The sound of Joburg” where you have to guess what’s making that sound — and callers phone in and get to excitedly say things like: “Is it that the rasping sound you hear when someone is scratching their privates?” or “It’s the sound of snot being blown into a Kleenex”. 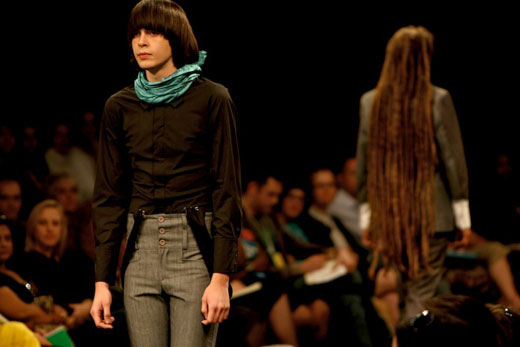 The male models moved jerkily down the ramp as if in a trance, their eyes fixed on the distance. Fashion can be may things but I have previously never thought of it as depressing. Word is that this was the Durban designer’s last show — a swansong to SA fashion and to living in this country, as for now she is re-locating to North Carolina or some other hard to conjure up American state. A fan of her usually sedate styling and use of colour, I found the show difficult to watch and spent much of it looking at those in the front row sitting across from me. I only saw Dion Chang’s front row etiquette piece after the show and now fear I may have committed some transgressions — I did wear fabulous shoes, but failed to sustain an expressionless look, and may have been distracted momentarily from the ramp by the free Mac lipstick on my seat. To see highlights of the shows, great photos and reports from the front and back rows, go to the The Frock Report.