#84. Head downtown for the Mercedes-Benz SA Award for Fashion Design 2009. A few Fridays ago I headed to the Seippel Gallery in End Street for the announcement of the Mercedes-Benz SA Award for Fashion Design 2009. As a kid I used to accompany my mother on buying trips for her clothing store in that part of town which then housed the city’s “schmatte” trade. A few years later I returned to End Street to my then favourite hangout, Idols, a nightclub that thinking back endlessly replayed Roadhouse Blues by the Doors. “Ah keep your eyes on the road, Your hands upon the wheel…”

Jim Morrison is long gone from End Street and the place is now home to  Aikona Furnishers and the Christ Resurrection Power Ministries and on that Friday afternoon lots of curious-looking families who were hanging out on the steps of nearby buildings watching Joburg’s high-fashion pack make an entrance.

The results were extraordinary — from David Tlale’s black and gold  with loads of bling “red carpet” to Abigail Betz’s playing with notions of South African female beauty from turn of the century advertisements and paintings of rural black women.  Craig Native wowed the judges with his futuristic sportswear range displayed among a maze of vuvuzelas. It was very 2010. And besides, I am a big fan of his irreverent style and humorous take on  ‘native’ culture. 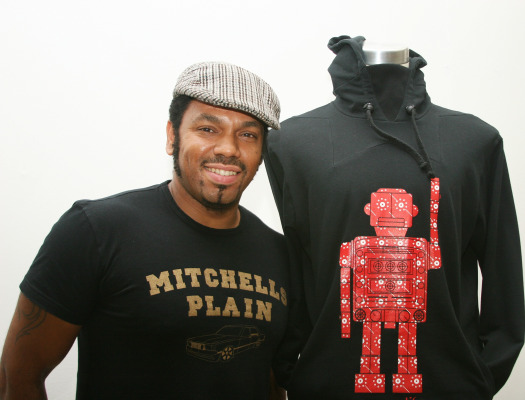 The Mercedes-Benz award deserves good press because it sets out to reward artistic endeavour in this country and in so doing encourages and showcases the incredible range of talent that we have in fields ranging from architecture to sculpture, choreography to poetry.Each year a different discipline is recognised.

And the awesome Black Coffee – without doubt one of the country’s hippest and most happening fashion labels – scooped up this award with an astounding collection of red garments with lots of their signature draping. Inspired by forms of South African traditional dress they created a modern interpretation. 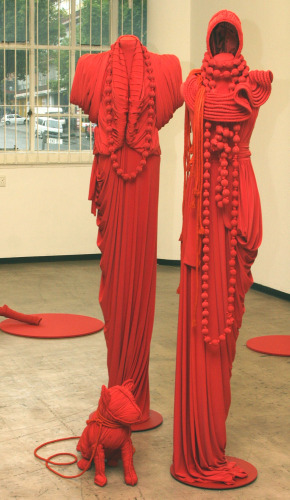 “Our inspiration was that silhouette created when African mothers wrap their children with blankets and carry them on their backs. We took this as our starting point. For the look and feel of the clothes we examined the textures of African hairstyles. We were also taken by the traditional head-to-toe clay colour, but reinterpreted it in a high-performance fabric made with spandex to give it an uncompromisingly modern twist,” said Lepen.

If I was asked I would venture that it also calls to mind the Voortrekker “kappie” and is a perfect fusion of two very different cultural starting points. Plus that dog is adorable.

While the winners received R30 000 the best part of the prize is that  Black Coffee and the other finalists will be part of Berlin Fashion Week Spring/Summer in July and their clothing will go on display at Haus Huth Contemporary in Berlin in March. It will then return for a city tour of SA.

I left End Street mid-Friday rush-hour, with the sun trying to break through the leaden sky and the heat rising from the rain-soaked streets of the city. Children were at soccer practice in a nearby park while commuters swelled the taxi rank in Joubert Park. And I was thinking about why this city makes me feels such nostalgia for things past and such excitement for things present and future. And I was humming a tune and singing “that was 20 years ago when there used to be a show. Now it’s a disco”. With respect and of course apologies to Jim Morrison but it’s the words to Copacabana (yes, sung by Barry Manilow) that got stuck in my head.