#85. Look for the city. I spent Tuesday night listening to William Kentridge and Nadine Gordimer talk about the “elusive metropolis” that is Johannesburg. SA’s best known contemporary artist and our Nobel-prizewinning author, both denizens of this city, appeared at Wiser (the Wits Institute for Social and Economic Research) to launch a collection of essays, research and thoughts on Johannesburg, co-edited by Sarah Nuttall and Achille Mbembe.

That this city seems to constantly slip out of one’s grasp was a persistent theme. It’s something I thought about on Saturday afternoon at the Zoo Lake as I watched a crowd of picnickers turn violent and chase a man through the parking lot trying to beat him. To distract the small children I was with, who hadn’t noticed the ruckus in their excitement at scrambling up the new dinosaur climbing apparatus, I summoned over the ice-cream man, who happened to be drunk. Very drunk. Not drowning, but weaving and emitting noxious fumes. And then there were the geese. Insistent on being noticed to the point of aggression. Much like the city itself.

William Kentridge spoke about the “demonic” in the suburban,  asking what a garden umbrella, a swingball pole, a machete and a wooden giraffe had in common.  These objects were identifiable in a photograph of people in Dieplsloot who were about to lynch someone during the spate of xenophobic attacks last year.

Kentridge catalogued the changing nature of the city’s fences and defences — from picket in the 1960s to vitacrete in the 70s, razor wire in the 80’s and electric fencing in the 90s. Today it’s sentry boxes and guard huts. “We are not so much going higher as going as going sideways…We haven’t yet gotten to landmines”.

He spoke of the city as elusive because it has no defining landmarks  – no river, mountain or sea. Just nine million trees and “cathedrals of thunderclouds”. The mine dumps that once ringed it have been carted away. Portable property. It’s a nice metaphor for the danger of thinking one’s possessions are one’s own – in Joburg your house, your car, your life can be portable property.

He said trying to understand this city is difficult and there is always a “sense of embarrassment” at this feeble “non-city”.

“It is of course a very dangerous city and that’s something we have to face…. but the intensity of life in Johannesburg is very important to me,” said Gordimer.

It’s not that I don’t love this crazy place where the centre has long been displaced by the periphery. Nor is it disloyalty to point out its faults.  Gordimer and Kentridge seem to share this view. Maybe just maybe it’s not the city that’s elusive. This city just is.  Rather it’s the vision each of us have of the city we would like it to be that is truly elusive… 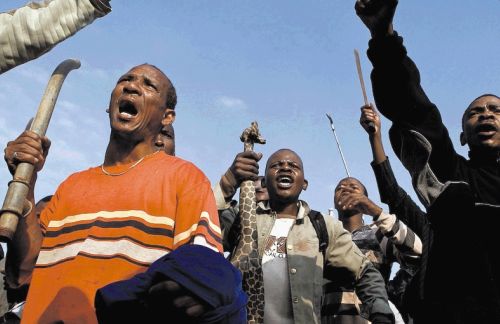 Photograph by Tebogo Letsie for The Times.

3 thoughts on “The elusive metropolis that is Joburg”