#169. Head to the city for lunch. We did that on Saturday after having heard earlier in the week about Lucky Moo. (The name alone would have been enough to send me there). Lucky Moo for Yum Yum Chinese food on the city’s Gandhi Square is where restaurateur Jaco Welgemoed has set up shop, far from his previous ventures which included Cite in Dunkeld, The Circle champagne Bar in Greenside and the Singing Fig in Norwood. It’s also far from his “fine dining” past at around R35 a dish but close to what inspired him to start those new [at the time] restaurants. Delicious food. Great dining concept. 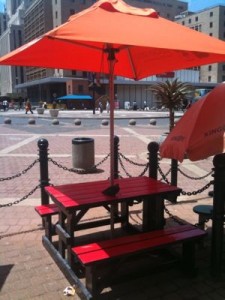 Our table at Lucky Moo. The pigeon flew off soon after

Gandhi Square, once derelict and named Van der Bijl Square, was named after the Mahatma who had a legal practice in Johannesburg. In 2003 the city unveiled a statue of him — which you can see in the far distance. To see a close-up of the statue click here. The re-imagining of the square was the brainchild of property developer Gerald Olitzki who has created a thriving commercial and entertainment hub in the inner city.

The view over Gandhi Square

We tasted the Mushroom Chicken, the Sweetcorn and Chicken Soup and the Thai-inspired Kung Pao Chicken. Yum Yum food indeed. We dined out in the Saturday afternoon sunshine hearing stories of wild west encounters like a weekday bank heist foiled across the square. We nodded, smiled and slipped our watches into our pockets. Having been hijacked in Kenya, conned by a shoeshine man in Delhi and pickpocketed in Paris we felt undaunted. Like any major city surviving this one requires street smarts, audacity and a bit of lucky moo