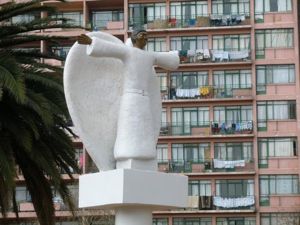 As for Hillbrow, it’s a place that conjures nostalgic, that calls up myths and legends. From the post-1994 hard drug scene that sprang up around the Sands Hotel to the playground of SA’s original party girl Brenda Fassie, Hillbrow was also home to my grandmother and a great-aunt (a lot earlier than that) who lived in the Coronia residential hotel in the late 1970’s (Now it’s a disco, but not for Lola …). Tropicana or was it Tropica sold the best schwarmas in town (It was the wrap) while Estoril had the monopoly on Italian fashion magazines. At Café Paris the men smoked and played backgammon and in the late 80’s Fontana would sell you roast chicken no matter the hour. Hillbrow was the height of cool. All bright lights and big-city like.

For months I have been holding on to a copy of a book called Hillbrow by Paddi Clay and photographer Glynn Griffiths, a great photographic exploration of the inner city suburb published in 1982 (now a collector’s item). [Paddi if you are reading this, I will hand it over at lunch].

The book set out to “Discover the real Hillbrow, behind the newspaper stories and the myths perpetrated mainly by people who hardly know it … It’s been maligned, overly praised, investigated, probed, cleaned up and discussed…”
Clay writes: “The book is not complete. Hillbrow itself will never be static.” This is the part I really love “It also has many hidden stories, which are difficult to tell legally, and without fear of physical retribution.”

Every generation claims a unique experience of a place and mostly, it’s all true. You just have to read Phaswane Mpe’s Welcome to Our Hillbrow and Ivan Vladislavic’s The Restless Supermarket to bring that idea to life or look at Guy Tillim’s incredible Hillbrow photos.

It’s easy to talk of Hillbrow in the past, as once being home to Joburg’s most vibrant street life — but as I write that I realise how loaded a statement it is. Because Hillbrow is still home to the city’s most vibrant street life. As the book points out Hillbrow is nothing if not born out of defiance. A place that has always transgressed the limits, not always comfortable ones, but it should be celebrated for that. And recently it was by iconic fashion label Love Jozi, who inspired by the Hillbrow book, set out to shoot a fashion spread at Hillbrow’s High Point (love the name of that centre). You can read more about it and see the photos on photographer Chris Saunders’ blog. It’s retro glam and uber cool.

Over the past few months the roadworks have disappeared leaving behind a cleaned-up version of the place, with towering arched street-lights and trees planted along the pavements. It’s Hillbrow being gussied up for 2010. But beneath that sort-of orderly exterior, behind the myriad airtime kiosks and hair salons, Hillbrow’s heart still beats faster than the speed of a fridge thrown out a fifth floor window (an old New Year’s Eve custom). Casual strolling not recommended.