#179. Celebrate the coming of the Gautrain. 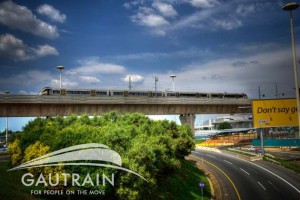 The Gautrain at OR Tambo International Airport

On a good day – when the monsoon season is not in full swing, and it has been for three weeks – Joburg’s roads resemble the face of a pockmarked acne-ridden teenager. Crevices and dongas, all flaring and angry. The robots don’t work and if they do the roadworks mock them. I have spent the past few days in the car — not waving but drowning, not really driving but sitting. I have been gridlocked in Braamfontein and Rivonia, Bryanston and Rosebank. I have tried the radio and think I have started to master Sepedi – and listened to an audiobook in record time (an 8-hour one). I have made more calls to my mother than I ever should and been offered everything from cellphone chargers to peaches, badly-spelled werld maps to feather dusters. I have debated the merits of fong-kong school shoes with a street kid and talked weather with a blind man.The only ray of light in all of this has been the outsurance scooter guys who have on occasion arrived from nowhere and started directing traffic and made me say things like “If I wasn’t spoken for …” Give them a medal and then send them to China to have replicas made.

I’ve just read Carlos Amato on the Gautrain, writing on Mahala, and I think there may be a reason to consider choosing life over manslaughter (a 15-minute journey turned into 60 minutes can do that to you). He writes:

“If you commute daily between Jo’burg and Pretoria on the Gautrain, you’ll pay about R1000 a month for your ticket. A trip between Park Station and Pretoria will take 38 minutes. Between OR Tambo and Sandton? Less than fifteen minutes. Plus you can read, work, chat, think, breathe. It’s called modern civilisation…

In due course, the Gautrain stations will become the seeds of a new, densified, intelligent, pedestrianised Johannesburg. High-rise apartment blocks will sprout around Rosebank, Marlboro and Midrand. The streets will be reclaimed from the shadows and the killers (both phantom and real). Bicycles and feet will become legitimate transport devices. Clubs and bars and theatres and cafes will cluster like crystals around the stations, and the reigning cultures of drunk driving and mall-cruising will die a natural death.

In short, Johannesburg will get a life.”