#198 Sign up for FiftyTwo: Weekly things to do and see in Joburg ©, an email newsletter – by a fellow Joburg enthusiast – that is fast becoming one of my favourite pieces of weekly correspondence. So much so that I am sharing this week’s missive from Adrian at Fifty Two. (To get yours mail him on adrian@fiftytwo.co.za) I am also sharing it because Origins Centre is one of my favourite spots in the city – the home of the largest collection of Rock Art in the world and a museum that showcases the origins of humankind in a way that is accessible, enagaging and highly interactive. Definitely a must-visit Joburg destination. 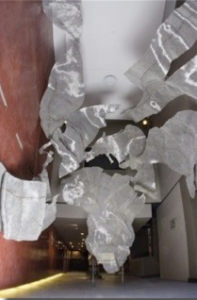 Entrance to the Origins Centre

“This week’s pick: Origins Centre & Australopithecus Sediba
Genre: Human History
What: 18 months ago and only 40 kms away at the Malapa cave site near Sterkfontein in Maropeng, a 1.9 million year-old new species of hominid was discovered. Australopithecus Sediba made local and international headlines stimulating conversation and debate. The discovery provided further evidence substantiating the theory that humans really did evolve in Africa. The discovered fossils are on display, for public viewing, at the Origins Centre, Wits University. This is the world’s only museum dedicated to showcasing and honouring the history of modern humankind. It tells a story of the emergence of humans as well as humanity in southern Africa – and provides visitors with a unique experience of Africa’s rich heritage.

FiftyTwo review: Museums, we understand, can be an educative overload but not the contemporary Origins. This centre of ancient art and culture is presented in an interactive, attention grabbing manner and somehow entertains even those hopelessly uninterested. The Origins journey leads you through the fossils discovered in South Africa and the contribution these have made to the understanding of humankind and then continues to demonstrate how recent finds have assisted in interpreting today’s contemporary world. The museum’s current showpiece is Sediba – encased in glass and in a room of its own. The sheer sight of this makes you wonder about your origins, try to listen in on the excavations behind the scenes tales, told by the University’s scientists – they’re greatly insightful. We really suggest one makes an effort to see this exhibition as it puts SA, once again, on the human ancestry map.

Tip: Sediba will only be on show until 16 May, before being taken away for further analysis. Taking a full tour of the museum will take at least an hour but you can refresh at their onsite Café Fino. Sign up for their newsletter here to be informed about the public lectures held and delivered by a number of leading international academics.

Interesting fact: Sediba means natural spring or fountain in Sotho and discoverer Prof. Lee Berger believes that this is a good candidate for being the transitional species between the southern African ape-man Australopithecus africanus and either Homo habilis or even a direct ancestor of Homo erectus – in other words a species that might be the starting point from which the genus Homo arises.

Where: Origins Centre, Wits University, corner of Yale Road and Enoch Sontonga Avenue, Braamfontein
Bookings: Open Monday to Sunday 09:00-17:00 & tickets can be purchased at the door.”
FiftyTwo: Weekly things to do and see in Joburg ©