#209 Follow the game – which we did to Bloemfontein on Friday to watch Honduras vs Switzerland. At this point we’re watching everyone – loving the mood, the spirit and fan fashion sense of World Cup 2010. And we are learning to love the team we are with. Wednesday was Germany vs Ghana at Soccer City (Go Ghana – of course one of my favourites; loved the men with pots on their head and the German guy wearing lederhosen also deserved a mention). 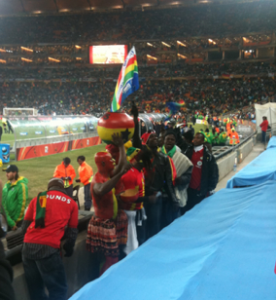 Friday was Italy being trounced by Slovakia at Ellis Park and a great pizza in the parking lot of a Troyeville pub followed by tip-top Portugese trinchado at the Troyeville hotel.
Back to Bloemfontein – The city of roses (about a 4 hour drive from Johannesburg) was all polished up for the World Cup. I especially loved the metal roses cut out on Nelson Mandela Drive and its vuvuzela streetlights decorated with the flag designs of the participating nations.
We found our way to a funky bar on Bloemfontein’s Second Ave (did I really say that) called Cubana which happened to be hopping with Swiss fans – easy to tell because they were the ones with the huge cowbells. I even saw one man with an enormous piece of Emmental on his head and had to laugh when some Swiss people asked a local to take their photo and he earnestly yelled “Say cheese”.
The stadium wasn’t very full but you couldn’t tell by the noise and the buzz of the Hondurans – whom we firmly supported – and the Swiss, and then an army of Free State locals who kept the spirit alive, dancing and singing throughout the game as the temperature plummeted into the minus numbers. The game was a whirl of action with both sides fighting their way across the pitch – but the no score meant they knocked each other out of contention. We had to change seats because we happened to sit behind one of team Honduras’ most ardent fans – the man with a donkey on his head who obscured most of the field.

So far most of the teams I have shouted for have lost so I have become an internationalist – ready to change colours at the drop of a linesman’s flag. We shouted for Honduras and cheered them as they ran – and once the game was done with the Honduran fans behind us acknowledged our contribution to team spirit and solemnly shook each of our hands (I was with a crowd). 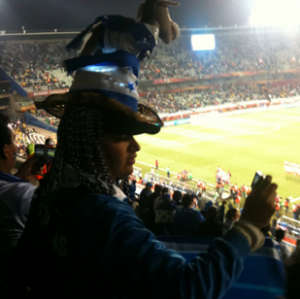 The next morning we stopped off for breakfast at Meel (87aKellner Street) – said to be Bloemfontein’s equivalent of Melissa’s, everyone’s favourite Cape Town gourmet food store. They serve great omelettes in a pan (with lots of caramelized onions and roast tomatoes)– and the inside of the restaurants has the smell of freshly baked bread. Delicious. 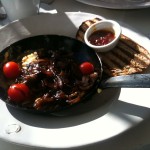 And then it was time to leave Bloemfontein, making some room for the German and English fans whose impending arrival was causing great excitement – if the high number of police cars whizzing past me on the route home was anything to go by.
Three days of soccer in a row and I am still unbeaten. Sunday was England vs Germany in Melrose Arch where two enormous bouncers guarded the entrance to Tashas, my favourite cappuccino spot there, and the massive crowd on the piazza watched the game while no doubt back in the English teams’ hotel room Victoria Beckham was helping pack up their belongings for their economy class flight home. Not very Posh at all.
So far, so good. Really good. We’re still waving flags, blowing vuvuzelas, enjoying being hosts and the quote of the week – that “South Africa is Plan B for future World Cups” ?