#210 Bask in the glow of a successful World Cup only to avoid the pull of humdrum routine now that the party is over. And while some are still pondering the significance of those fantastic white elephants that sucked dry the pond at the closing ceremony I have been celebrating the fact that I finally got to wear the colours of a winning team (evidence below), packing up my array of supporters flags and scarves (Bafana Bafana, Ghana, Argentina, Portugal, Netherlands) and catching up on the good press South Africa has been getting while  playing Knaan’s waving flag over and over again and sobbing quietly. Just read Boris Johnson’s Telegraph column and couldn’t say it better so here goes. 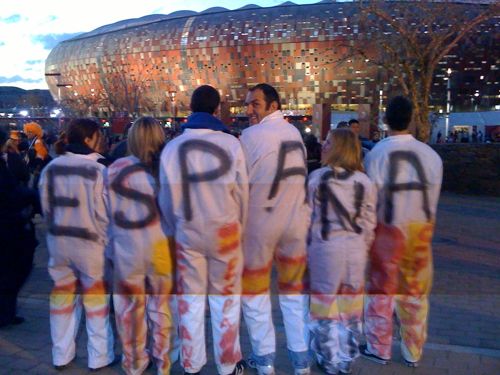 “What happens on July 12, after the captain of the winning team has waved the Jules Rimet trophy in his sweaty palm? What will people say when the last fan has traipsed home and the last journalist has composed his last philippic against his defeated national team and when the last vuvuzela has parped its last melancholy parp? What will this World Cup leave for South Africa ?
I have asked barmen and journalists and politicians such as the remarkable Helen Zille, premier of the Western Cape province . I have ended up feeling like those Monty Python characters who were so foolish as to question the benefits of the Roman Empire…” You can read the rest of this here.