#212. With Apple’s iPhone4 just released locally and Moore’s Law showing no signs of leniency our world is increasingly being filled up with piles of techno-junk. As an early adopter of all things new when it comes to technology,  I have now found a way to offset the environmental hazards of my habit. His name is Kevin Friedman, from Frankli Wild Studio in Norwood and he loves Apple Macs, so much so that given the opportunity he will solder, shape, beat and fashion them into something for you or your wall to wear. 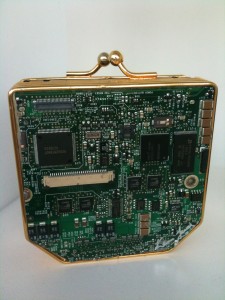 The motherboard purse from Frankli Wild

Friedman, who belongs to a long line of jewellers (he is seventh generation), recently exhibited his “iRibbit” collection at the iStore in Sandton. His habit of remaking computer parts into adornments started with PC components but he has since moved on to Apple parts that were destined for recycling. Given the opportunity he extols the virtues and beauty of Mac components. Not just pretty on the outside by his account.

“Working with the inside of a hard drive gave him newfound respect for computers” reads the introductory notes to his exhibition. [Kids, don’t try out this newfound respect at home]. From laptop cases that are hollowed out and decorated with graffiti to earrings and cufflinks made from keyboard parts. Friedman mixes the parts with precious metals and stones. There was a lifesize sculpture of a man with a large gemstone heart, a rosary cut out of motherboards and a even a candle holder for Hannukah. 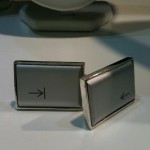 The collection was extensive –  according to Friedman it took two and a half [must have been feverish] months to create.

Some favourite pieces include the collection of cufflinks made with sterling silver, a reinterpretation of the Ndebele blanket that you could probably hook up to a projector and a neckpiece made out of the earpieces from iPod earphones.

The queues for the iPhone4 and the oohs and aahs that a recent test drive of the iPad elicited were just further evidence that we have entered the realm where the techno object has become a thing that is fetishized and coveted, and Friedman’s work with its hefty pricetags is just a funny way of showing that.