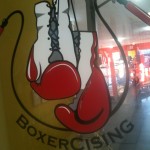 Every week for the past few months me and the 9-year-old take ourselves off to a boxing gym in Norwood where we train as if we are planning to meet Ali in the ring. Under the guidance of a former champ – Andrew Matabola – we do crunches, push-ups, sit-ups, squats, lunges, weights, skipping and then we punch, and punch and punch. Combinations of straight punches, uppercuts and hooks, our hands wrapped, and encased.

At heart a pacifist and an opponent of wars based on claims about WMD I confess that often each punch has a name to it and that by the time I have finished the session my hands are aching and my mind is clear. Okay,  I can see how peace could be restored by throwing some punches

Around us big men sometimes cry. They have usually just started training and are being put through their paces. I know how they feel because in the first few weeks I had to steel myself for the training. I couldn’t cry because I was too busy repeating my mantra – “Don’t throw up in front of the big men crying”.

On Saturday night I went to watch my first match. White collar boxing at the Waverley Bowls Club. Waverley is one of those suburbs in the kosher belt of Joburg – where even the boerewors dogs have seen a hechsher. And as the interest in lawn bowls has diminished (with bowls being one of the most dangerous sports in the world – more people die on the bowls lawn than on any other sports turf. A Crazy Monkey fact) clubs like this one have reinvented themselves by introducing more youthful pursuits –  drinking cheap beer or in this case hosting white collar boxing. Five bouts, no winners declared as this is amateur boxing and 3 x 2 minute rounds.

The place was packed, heaving with fans, hot as a sauna inside. A mix of kids and kugels, tough guys, tough girls and one man who could have been the Waverley rabbi (I know he wasn’t, but he coudda been a contender) all out on a Saturday night. With eye of the tiger looping in my head I watched the first match expecting to close my eyes (a little squeamish when it comes to seeing people get smacked) only to find I have developed a critical interest in the sport. Hmmm. I found myself thinking things like “She has a long reach but her punch lacks power”, “Why aren’t they going for the body to weaken their opponent”, “I would have deployed the uppercut” and “what the hell is that? he’s supposed to float and sting not look like crouching tiger, prancing dragon”. Oy!

Anyway the real reason for being there was to support a friend, Nechama “boom boom” Brodie as she fought in her first public match. She looked great in the ring, strong and fit and she threw some good punches. Photojournalist Nadine Hutton captured the action brilliantly with this stop animation video. It’s a work of genius really. Her photos from the night can be found here.

Saying I “enjoy” boxing – makes me a little bit uncomfortable. As if I am admitting to supporting the NRA (which I would never) and enjoying seeing the wings torn off flies (while I do believe the only good fly is a dead one I’m not into that kind of cruelty). Although I do. I really do.  And it’s a fact that Joburg’s amateur boxing circuit seems to be thriving, and by all accounts Cape Town’s not far behind. I could conjecture that this friendly country has a barely concealed vein of aggression running right through it and that putting a pair of gloves on and smacking a bag or a person in the gym until your hands bruise is becoming vital to maintaining our mental health. But I won’t.

* If you’re keen to put those gloves on I found this listing of boxing gyms. Nadine Hutton’s site is 2point8.co.za and you can find more of her photos from “Rumble in the ‘burbs” here.

2 thoughts on “White collar boxing can be kosher”