Get excited about this year’s Design Indaba as Cape Town’s premier event will be in Joburg next week. With the main conference sold out in CT the organisers have come up with simulcast events in both cities. I am planning to attend DI2011: A Better World Through Creativity, at the Arts Centre Theatre of the University of Johannesburg, Kingsway Campus, for the three-day programme starting Wednesday next week.

I have been to the Design Indaba Expo a few times and last attended Design Indaba on its 10th anniversary in 2007. Then I was watching a presentation on Germany’s World Cup Fan Fests and trying to imagine what World Cup 2010 would be like. Done that!

I am a huge fan of this event that brings together an incredible array of creative minds to share their experiences and inspiring works. It’s the South African equivalent of TED, just a whole lot more stylish. In 2007 my favourite presenters included Professor Neil Gershenfeld, Director of MIT’s Center for Bits and Atoms (just the name of that centre would have been enough) who spoke about small-scale project centres that enabled people from severely un-advantaged communities to take part in creating technology and not just consuming it. It was brought together under the idea of “personalising fabrication”  – that if you give ordinary people access to modern means of invention – a lab – you get extraordinary things.

My other favourites were Massimo & Lella Vignelli, an uber-stylish and mostly adorable couple who have worked for brands as diverse as Ducati, Benetton, Knoll International and American Airlines. Their design ethos was “If you can’t find it, design it” and it had led them to design everything from furniture to packaging, household objects and newspapers  to the New York subway map (described as visual spaghetti). “Obsolescence is a social crime” was their war cry and they decried trendiness and all forms of visual pollution, standing up for timeless design.

It was also the year I first encountered the  work of SA designers Haldane Martin, of the Zulu Mama Cafe chair fame,  and Heath Nash whose range called “Other People’s Rubbish” made beauty out of reusing and recycling and just caring. I am a sucker for that.

So I am excited about this year’s event and looking forward to watching among others, SA’s most enterprising astronaut and social entrepreneur Mark Shuttleworth and Alberto Alessi scion of the design family and responsible for my favourite  cake stand (a wedding gift I still treasure). 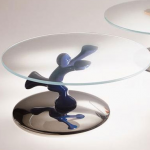 I still need to go through the rest of the programme in detail but for now I like the fact that I am in for some surprises. Events like this are great for rewiring brain activity, firing new connections and severing links with ennui brought about by thinking that there’s nothing new under the sun.

*All you need to know about Design Indaba 2011.