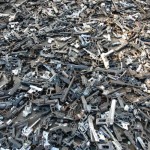 Brokenhearted that it’s all over… a last fix from Design Indaba 2011. And the highlights of the last day were …
Pass the envelope please

As Mexico’s drug war has escalated so has the number of deadly weapons. Pedro Reyes wanted to do something about it. He came up with a campaign that involved creating a series of TV spots in the “shape of a soap opera” entreating the audience to bring a gun to city hall in exchange for a coupon you could trade for a microwave or other household appliances. It broke the record for the voluntary donation of arms with 1527 guns handed in. They were taken to a factory and melted down and fabricated into 1527 shovels. There was “not a big design improvement” is typical of Reyes’ understatement. Just a change in source material – “from an agent of death to an agent of life” as the shovels were handed over to schools and used to plant trees.

He spoke about the psychological transformation that the children experienced in knowing that they were using an implement that previously could have taken a life. See more about it on The Coolist.

It’s just one of many design ideas from Reyes who is currently working on an Urban Genome Project – “I am interested in creating an index of ideas”, mapping genetic code of urban projects. This kind of project is my version of creative jet fuel – it involves listing the most interesting best practices for improving urban life.

I liked his philosophy of design, “that as an architect and designer  you are responsible for the hardware and the software. The artifact is not the end of the process.”

Next up on the favorites list was Israeli typographer Oded Ezer.
“My name is Oded Ezer and I am a typoholic”. I think I may be an Oded-Ezer-holic after a presentation that pushed the limits of what you can imagine typefaces can do or humans can do with them. Ezer loves type so much he turned himself into a typeface. His mission to is to make type behave in previously unthinkable ways.
He dreams in type and has even been known to dress up in it.

He showed an extraordinarily beautiful tattoo he designed for a woman, Meg from Seattle,  who wanted to display both sets of her grandparents initials. “I got an email to ask if I design tattoos…  she disappeared and i was OK with that. Then she wrote again that I have to design a tattoo for her. She was  looking for her grandparents initials – they had to be typographically related  and typographically gorgeous.
“It will take a few months, I said.
“I have been waiting 3 and a half years.”

His challenge was to make type “behave in a way that it will speak about time… Our handwriting is like a timeline.. I wanted to  pull inside the infinity aspect of life.”
Other work he showed was a poster series for the world’s biggest Jewish Cultural Festival, held in Krakow each year (made up of lettering created by friends and displayed on Skype calls from around the world) and a campaign poster he did to highlight the scourge of sexual abuse – urging you to make meaning of a series of ratios. Quite brilliant and visually arresting. 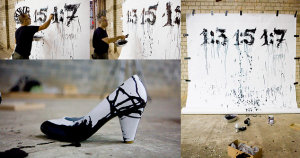 Designed by Oded Ezer for a charity exhibition in aid of the Center for Victims of Sexual Assault, and the Shufuni Shoes Fair. (PHOTO by Dror Ben Naftalli) http://flic.kr/p/8Lp9Kz

Then there are his typoplastic surgeries, involving grafting letters to small creatures like rodents and his adventures in bio-typography. This brought the house down. “I wanted to interfere in their DNA,  creating a creature that is neither ant nor letter”.  That way … “what if they wrote ‘water’ on my floor i could give them water.”  His experimentation took him to “typosperma” – a project to “interfere with human sperm to create a typographic creature”. 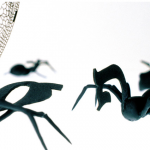 When not laughing with delight at the carnival that is his imagination I was awed by his mind’s reach. Truly delightful.

He mentioned that he thought of forming a typographic religion where he would be the shaman who danced the dance of typography. “Two students wanted to be the first believers”. He had to emphasize he was joking because there was a good chance that the DI audience were ready to don some letters and follow his merry tune.

And finally there was Robert Wong, Google’s creative director who unveiled his mathematical formula for creating a better world through creativity.
S! = Em +Cr

It’s a beautiful way of looking at what’s worth creating. As Wong emphasized to create experiences that surprise and in so doing, transform, you need to feel, to care. “When you surprise anyone [in a good way] you think about them first.”

I also liked his view of search [granted he is from Google]  that the “best search results don’t just show up on a page, they show up in people’s lives”. It’s a dizzying thought that each time we type in a phrase and hit that button we are one step closer to doing something, meeting someone, transacting, traveling to a new destination.

He showed some fantastic Google projects including  Life in a Day  – “an historic global experiment to create the world’s largest user-generated feature film: a documentary, shot in a single day, by you” and made into a film by Ridley Scott.

It involved more than 4500 hours of video shot by the world and submitted in response to Google asking “Show us your day”. There was also work done by Google staff as a personal project to support the “It gets better” project, a movement to support young people grappling with the stigma of coming out. This after a number of teen suicides related to kids being bullied over their sexuality. Barack Obama also created an incredibly eloquent message, as he always does, to support this.

Wong closed by referring to a joke made on the first day by the opening speaker which went something along the lines of … a teacher asks a little kid what she is drawing and she replies: “I am drawing God” and the teacher says “But no one knows what God looks like.”
And she responds without missing a beat “They will when I am done.”

“No one knows what a better world looks like,” said Wong. “But if we view it with more empathy and galvanize to exceed expectations, and know the “why” of what we do that will have so much impact, and hopefully they’ll know when we are done.”

His final slide “Do epic shit!”