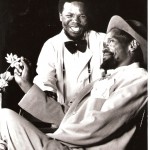 Get to the Market Theatre in Newtown really fast for “Sizwe Banzi is Dead” [Last show is on Sunday]. Last night we saw an exhilirating performance of this South African classic first performed in 1972. I saw it first about 20 years ago when this country was a very different place and the tragedy of it all resonated so deeply [I was a total drama school groupie then and let me ‘fess up here to always  having had a penchant for the dramatic]. It’s an outstanding piece about identity, about what it means to be a man, about dignity, and about what’s in a name. Then it was also more a piece about the bleakness of being a black man under Apartheid, of having every aspect of your life circumscribed by cruel and petty laws and even more cruel and petty enforcers. Interestingly the play has not dated at all and yet the response to it now is so different. Last night in a packed Laager Theatre you could have been mistaken for thinking the piece was written as comedy – the audience laughed and laughed,and so did I, totally transported to Styles’ photographic studio in New Brighton, Port Elizabeth and held rapt by his stories about his time at the Ford Motor Company.

It got me thinking how our laughter, as South Africans, has changed. In the 80’s there was little to laugh about when you saw a play like this – it was bitter humour. In the 90s we started to laugh but at all the wrong things. I remember seeing a play at the Market about rape and political rot and being shaken by the audience’s laughter at what I thought were the most dramatic parts. Last night the laughter was joyful, compassionate. Not a laughter of forgetting though. An interesting shift in an audience that comprised multiple generations. But enough of that – and back to the stage. 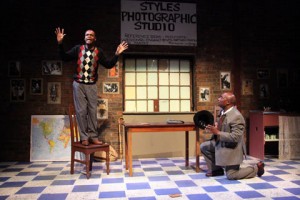 Omphile Molusi and Arthur Molepo in Sizwe Banzi is Dead

An enthusiastic knock on the door brings Sizwe Banzi and his story into Styles’ “strongroom of dreams” where his death and rebirth unfold through a series of chance encounters.
There’s a fantastic video clip of John Kani performing the play – sadly the embed code was removed – so you need to watch it on on You Tube. Click here to see it.

Styles photographic studio called to mind an old favourite, Dambudzo Marechera’s House of Hunger. In the novella Solomon the township photographer is a rich man because he can, for a fee, obliterate “the squalor of reality” with his photographs. His customers, who have little hope of ever leaving the township with its “hunger-scoured hovels” holding them in its “spidery grip” are able to realise their dreams of escape through the illusions he creates – “Photographs of Africans in European wigs…The background of each is the same … waves breaking upon a virgin beach…”
Sizwe Banzi is Dead is a beautifully written play [the work of John Kani, Athol Fugard and Winston Ntshona] and was performed so deftly by Arthur Molepo and Omphile Molusi [this under the enormous pressure of having the legendary John Kani who in addition has always performed the role of Styles] in the audience watching. BTW he gave the actors an incredibly warm and generous response when they emerged.

I blush to say it but when I first saw the street posters I thought “Can’t the Market Theatre come up with something more original. Isn’t Sizwe Banzi dead?”
I am now a believer. And totally back in love with the theatre. A good live performance will that do that to you. Try it.

* For more on the Market Theatre. Bookings are though Computicket

** And thanks to BASA for my tickets. I love your work