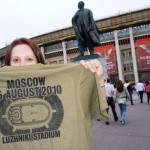 Or just a sneaky preview before U2 plays at FNB Stadium, in Soweto, this weekend. This after catching U2 360 in Moscow a few months ago. Not sure if Bono feels the same way but it seems as if our eventual meeting is meant to be. So far paths have been crossed and all manner of coincidences have revealed themselves. It started on day one in Moscow. Fresh from the airport we left our hotel for a walk up one of Moscow’s busiest thoroughfares, Tverskaya Boulevard, on which our hotel was located next door to the Ritz Carlton. There we encountered a crowd waiting patiently on the forecourt. Curious, we asked some questions and soon had word from a wild-eyed Irishman that U2 had arrived in Moscow for a concert that week (he had been following them for months). We hung around for a bit joining the papparazzos and felt the excitement ripple through the crowd as a car pulled up. The crowd lurched forward, necks craning, cameras ready. The Irishman was unimpressed. Looking above the crowd at what was causing such a stir he snorted: “It’s only Adam”. Two blocks up the boulevard we found a ticket kiosk and booked our tickets for U2’s first concert in Moscow. 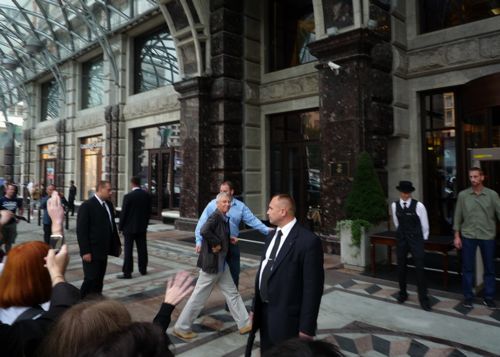 Two days later we took the subway  to find Moscow’s Vodka Museum in a funny part of town called Izmailovo. In a setting that looked like Russia’s version of Disneyland with a jumped-up faux St Basil’s Cathedral and a nervous-looking bride and groom complete with a cheap-and-nasty-looking-wedding party we got the lowdown on Russia’s most ubiquitous drink. We left the Museum for the strange little craft market next door and seduced by the smell of fresh salmon being braaied by large and serious-looking men in aprons we ordered a plateful and settled ourselves at the wooden picnic tables. Around us stalls filled with matryoshka dolls of every variety – there was even a set that looked like Nelson Mandela – were arrayed together with lots of other tourist tat and some Communist era momorabilia. We soon got talking to the two men seated across from us – a Belgian and a Hollander who turned out to be crew for U2. They had been travelling by truck across Europe with the band – the concert stage takes about four days to assemble and another four to take down and pack up – and from Moscow would be driving to Istanbul for the next concert date. We broke bread, ate our salmon and drank blackberry vodka from the bottle together to show our solidarity.  It was a beautiful day. 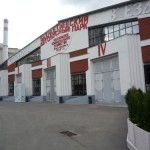 Two days later we made our way to the Garage Centre for Contemporary Culture, Moscow’s hippest gallery founded by socia-lite (rather than socia-list) Daria Zhukova who has turned a huge contructivist bus depot into an amazing contemporary art space that would make any city envious. There I fell in love with Lady Gaga after being drawn to an installation created by Italian artist Francesco Vezzoli. The work entitled “Ballet Russes Italian Style” included a music video with the Lady and Vezzoli of her song “Speechless” accompanied by dancers from the Bolshoi dressed by Miucchia Prada. A mix of video, photography,  embroidery and performace with references to constructivist style art posters, the paintings of Giorgio de Chirico and the choreography of George Balanchine – entrancing. I stood before the video screen mounted on an easel and watched the video replay itself over and over and over again. After spending the better half of a day at the gallery we were told by our waiter at the perfect little gallery cafe  that we had missed the visit  by Bono and The Edge just by a day. I still hadn’t found what I was looking for. 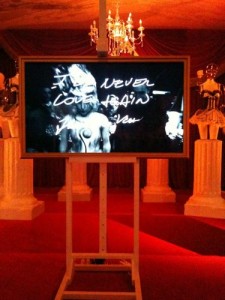 There was nothing left to do but head for Luzhniki Stadium a day later for the concert. We navigated the spectacular subway sytem in Russian (more ballroom than transit space), joining 80 000 fans and a few thousand soldiers who lined the streets from the station to the Stadium on the outskirts of the city. Lots of baby-faced blond boys in oversized hats (it’s a Russian thing – the police and security guards have them too) standing arm to arm looking more prepared to stave of a military invasion by the case of Lord of the Flies.

The stage was more than impressive. Incredible actually, like a huge creature, more animate than structural. An almost alive space with massive screens, brilliant light and colour. And of course bringing to life a 360 view of the world. First up was Snow Patrol who warmed up the crowd. Then U2 opened with David Bowie’s “Space Oddity”

the stage lighting up as if it would take  off into the Moscow dusk. What followed was an odyssey  that included  a video linkup to the Mir space station later that night. Lots of carefully thought through cultural references for the band’s Moscow debut and of course lot of Bono-isms, footage of Burmese opposition leader Aung San Suu Kyi and Desmond Tutu. And leading up to it were meetings with a president and a  bare-chested  prime minister and some environmental activists [some of whom were arrested outside the concert according to the local paper] fighting to save a forest from a toll road. A real World Summit roadshow. And through most of it the rain poured down and the thousands of fans on the field were unmoved by the the weather. And Bono, with water dripping onto him and off of him, did an A capello version of “I’m Singing in the Rain”.

[I heard a funny story last night from a fan of the band but not of Bono that may well be apocryphal but is funny nonetheless. The story has it that at one particular concert Bono told the crowd that “every time I clap my hands a child in Africa dies” and someone in the audience shouted back “Well then stop fucking clapping”.] Personally I am a fan of the man with a conscience (not so much the star of that Louis Vuitton luggage ad) and have long settled on the idea of flawed heroes.What’s not to like.

So Bono if you are reading this – let your people call my people. Lunch is way overdue.