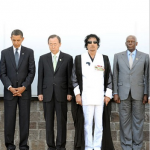 Among reports of the northern territories melting down and concerns over the start of the Formula 1 season (Bahrain has bigger problems) and Muammar Gadaffi, the man of many names not to mention many fashion statements, sharing headline space with Charlie Sheen for the “who is the craziest award” this is too good not to share. 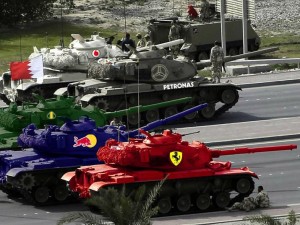 “Dictator Chic
Colonel Qaddafi—A Life in Fashion
Since completing his transition from international pariah to statesman [AND BACK], Colonel Muammar Qaddafi—the longest-serving leader in both Africa and the Arab world—has brought color and his own eccentric panache to the drab circuit of international summits and conferences. Drawing upon the influences of Lacroix, Liberace, Phil Spector (for hair), Snoopy, and Idi Amin, [WHEN NOT CHANNELING THE KING OF POP. May he R.I.P] Libya’s leader—now in his 60s—is simply the most unabashed dresser on the world stage. We pay homage to a sartorial genius of our time.”

And when you are done with that – it’s time to take the Guardian quiz.

Charlie Sheen v Muammar Gaddafi: whose line is it anyway?
The US actor and the Libyan leader have produced some choice lines recently. Can you distinguish between them?

Click here to see the photos. It’s a trip worth taking.