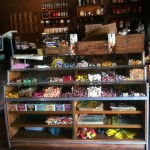 Inside the Plum Tree cafe, Parys

We have a house rule. The best weekend getaways are less than two hours away and involve no cellphone reception (it’s the one time I thank the networks for a job not well done – that doesn’t excuse the dead spots in Joburg’s “under-resourced suburbs” like Sandhurst, Dunkeld and Parkhurst where for around two to R20-million you can get a house but not an uninterrupted phone call. Funny that.) Okay, they also involve crisp white linen, large bath towels, warm weather, a natural wonder (in this case a World Heritage Site), a smidge of shopping, delicious food and great company (these all necessary, in no particular order).
Human Right’s Day weekend in Parys checked all the boxes.
Parys lies just over a 100km south-west of the city in the Free State, where the sky lets you know how vast it is.

The town, on the banks of the Vaal River is a quaint outpost of antique stores (the best one is Pines at the start of Bree Street – the main drag) and pawn shops, that stock everything from Royal Doulton dinner services to R5 tat and second-hand bedpans. Definitely a day’s worth of browsing to be done. 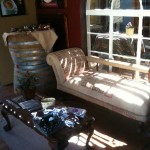 I really liked the Art Lovers art gallery with its salon prive of South African masters, the funky retro interior of the Plum Tree cafe and the local roastery with its coffee-sack upholstery. There’s also a surfeit of surf shops, “draad handelaars” and the obligatory small town South Africa Vetkoek Paleis. [Of course my first encounter with one was in Benoni.] For children of all ages the Candyman is a treat – with piles of homemade fudge, peanut clusters and sweets you can pay for by the weight. We ate at Feast, described by some, Ok just one, Modern Overland“as a sleek and summery cafe that feels just a little too cool for Parys.” Tasty food but the pace was perhaps a little too slow even for Parys on a Sunday afternoon. Our young waiter looked scared to confront a table of 6 adults and 6 small children. We also tried Ruby’s for lunch – delicious trinchado with chips – set amid the splendour of Parys’ finest example of Boere burlesque. But then if we wanted Paris – we had come to the wrong place. And besides travelling that far for a weekend away breaks a house rule.
We stayed about 25km outside of town, at Knopberg, a delightful guest farm off a dirt road lined with pink and white cosmos that leads into the historic town of Venterskroon – which in 1890 was a bustling gold mining town and also had a post office, I am reliably told.

If you go ask for the “big house” although we got the cottage with a glass bathroom and outdoor shower that nearly made up for it.
Today there’s not much bustle on the Venterskroon road besides for lots of real 4-wheel drives – not the kind you get in Sandton – although to be fair we only walked as far as what looked like a survivalist camp and watched a very drunken old man do a funny walk that could have made it into John Cleese’s Ministry as he left the nearby shebeen.
But enough of that – the place is tucked within the folds of the Vredefort Dome where a giant meteorite – “the size of Table Mountain” says my trusty guide The Joburg Book on matters local and geological, struck the earth two billion years ago, melting rock, hurling debris and no doubt dinosaurs and all this is said to explain the richness of the Witwatersrand Reef and the gold that put us on the map. 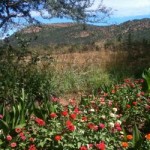 After a rainy few months – the hills were abundant and green and the grassland hummed with insect life and all manner of small crawling things. The pace slowed. We ate. We cooked. We walked. We read. We talked. Held captive by the views, the weather, by that Free State of mind. What’s not to recommend. And maybe next time we’ll get further up that road. 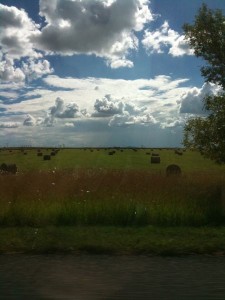 Hay bales outside of Parys