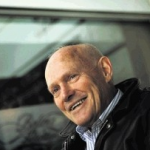 To the Troyeville Hotel book club on a rainy and then crisp Autumn night. And set against the twinkling lights of Ponte and the Hillbrow Tower through the window darkly, Justin Cartwright was being interviewed by Murray Michell, the head of South Africa’s Financial Intelligence Centre. The “banker” and the author had been brought together for an event billed as “The banking crisis comes to Troyeville” in a move intended to cajole those who think that fiction may not be serious enough stuff to leave home in the northern suburbs for. To be truthful the crowd at Troyeville are more attuned to hearing about civil wars, death cults and bloodthirsty Liberian warlords, dark subjects that unsettle, non-fiction that makes claims to be truthful,and therefore very serious and therefore very important. Serious work to be accompanied by a manly man buffet of chicken livers, prawns, calamari and chorizo washed down with lots of beer. [Although an extended email interaction prior to the event with the Troyeville’s charge d’affaires, Laurence Jones, bore transformative results with delicious vegetarian food making its way onto the menu.]

Cartwright is unashamedly a “serious literary author”. It sounds like a confession at an AA meeting. Hearing those words was reassuring, and listening to Cartwright speak about writing, and books, and creating fiction was delightful. He is a man who looks built for being serious –  trim, compact, wearing age and experience like a well-fitted suit. He has a quiet and refined sense of humour and a knack for swift delivery of great punchlines, usually drawn from witty interactions with other interesting people and their work.

Michell, his interviewer, went against the grain – and seemed to be drawn not by the banking crisis of which the novel is a type of document, but by the possibility of exploring the art of fiction and of art. Instead of forensic financial intelligence he exhibited a deep appreciation of literary endeavours and it was clear that had Cartwright indulged him he would have spent lots of time discussing Late Impressionism and Fauvism. I liked him a lot, and decided then that if I was to join a bookclub I would want Mr FICA to be part of it (as long as it didn’t require multiple certified copies of my ID book and proof of residence). As for Cartwright I liked him so much I am going to call him Justin from now on.

The book “Other People’s Money”  is a “state of the nation” novel set in England at a time of great crisis – this time it’s financial. It’s the story of a private bank and the family who started it. A book “about people” Justin emphasised, rather than financial instruments. A country, an industry, a family shaken and stirred. Justin, who resides in London, but is a South Africa author has been shortlisted for the Booker and won the Whitbread. He also won the Sunday Times Fiction Prize for The Promise of Happiness, in 2005. At the time I was an organiser of the Sunday Times Awards and editor of Sunday Times Lifestyle, and must confess it was the first book of his that I had read. I was sold on him. I didn’t meet him then – and can’t recall why not – but had a chance to make up for it on Tuesday night. I even went against my usual instincts and asked for my copy of his book to be inscribed.

“Good novels improve our understanding of the world,” he told the audience, “incrementally raising awareness of what it is to be human”. It’s as good a defence of fiction as one needs – although I am a fierce defender of good fiction never having to defend itself. The evening seemed to be transformative with the audience held wrapt and the organisers confessing that until now they had hought of bringing fiction to the Troyeville as a gamble.

One of the suburb’s most famous residents writer Ivan Vladislavic was not there on the night but I would have thought his work had long put to rest that debate.  Especially in this city where truth and fiction can sometimes be hard to tell apart.

* To join the mailing list of the Troyeville Hotel book club email laurence@troyevillehotel.co.za or kate@lovebooks.co.za. Read the Guardian review of the book here.