It’s just too good to pass up. South Africa’s minibus taxi industry is planning to launch an airline it was announced this week. It will be an easy transition seeing as how most taxis fly past you anyway. This morning I watched one Joburg taxi driver disregard a red light near the Zoo lake. Yesterday another driver sat talking on his cellphone while inching closer and closer and closer to my bumper – his taxi jampacked with extra commuters in what looked like a scene from some 80’s college frat party where some drunk smartass wants to see how many jocks can be packed into a telephone booth. At least no one was mooning me. 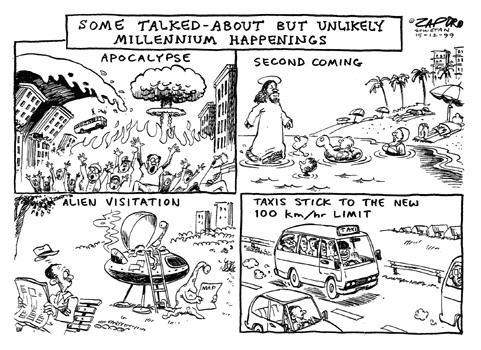 In an article in The Times this week “Nkululeko Buthelezi, business development officer for Santaco (South African National Taxi Council), told potential investors and reporters in Johannesburg that the routes Santaco was looking at, such as Lanseria to Bhisho, Eastern Cape, made sense for their customers, who often made a 14-hour road trip for a funeral and had to return five hours later.” The ones who make it back are the lucky ones. Then I did the maths on that figure. Hmm Interesting! At those speeds maybe Santaco should consider launching a space shuttle.
Joburg’s minibus taxi drivers are legend – I forsee shootouts at our otherwise sleepy airports as taxi owners fight it out over routes, pilots who ask the pretty girls to ride upfront, and at least one pilot slowing down next to another plane to chat to his friend in the other cockpit. Then there is the poor air traffic controller in Bhisho – you try stop a taxi driver holding nothing more than a ping pong paddle – and all those stops that weren’t on the itinerary.
So keep your eyes skywards – and if you see a plane emblazoned with “When days are dark friends are few” duck!