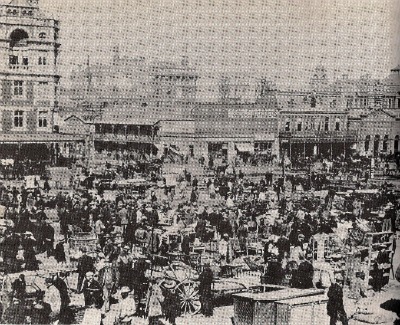 The tour was led by Past Experiences, started by archeologist Jo Buitendach, and it’s just one of many on their menu. Our guide for the morning was Tania, who made it clear that the city’s present is much like its past. She described the founding of this mining camp and its penchant for alcohol – let the record show that early denizens drank very “interesting alcohol” including everything from mineral oil to rotten fruit. In the 1800s there was one bar for every 26 people. It was also a city of men back then with reports of the first woman to seek her fortune in the camp being carried aloft.”it was a rough place, beset by hectic dust storms that would blow the houses over”. She described the first houses as covered in corrugated iron to protect the brick structure, a style very much in evidence in the squatter settlements that dot the outskirts of the city. “It’s always been a city where things were demolished rather than rebuilt”.

I learnt that Joburg’s first shops were all in in tents, and the store’s name would have been pinned to the tent flap on a piece of paper. 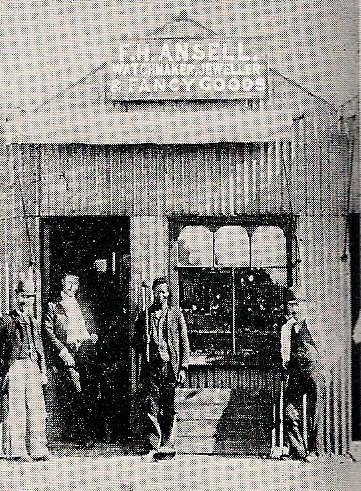 The first shop of FH Ansell, 1887, at the corner of Rissik and Market Streets

Standing amid the bustle of Saturday morning in downtown Joburg it’s hard to imagine that once you would have been standing in a market square among traders and oxwagons, livestock and fresh produce, all covered in a film of dust. Always a city of foreigners, always a cosmopolitan place.

We stood in front of the city library on Market Square – built in 1935 – and now closed for renovations. “This city was not just for miners and rough people who drank,” she reminded us. “They wanted it to become an enlightened place”. 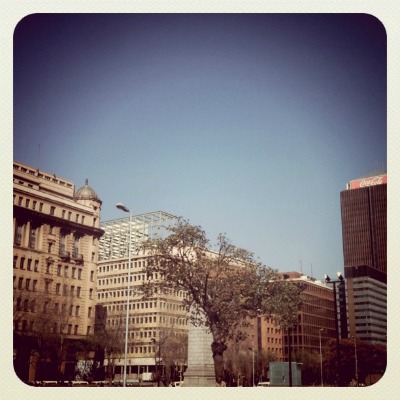 In the square across from the library, renamed for Beyers Naude, a memorial towers into the sky remembering the war dead. 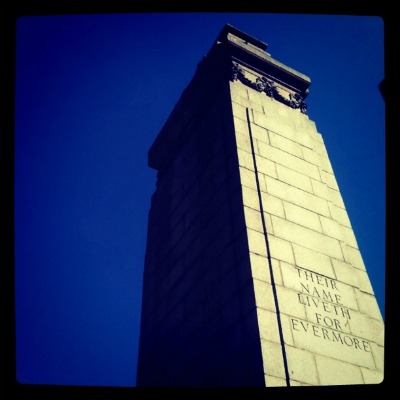 We stopped by City hall venturing inside to see what once was the largest organ in the Southern hemisphere with its 1600 pipes – still in good condition. 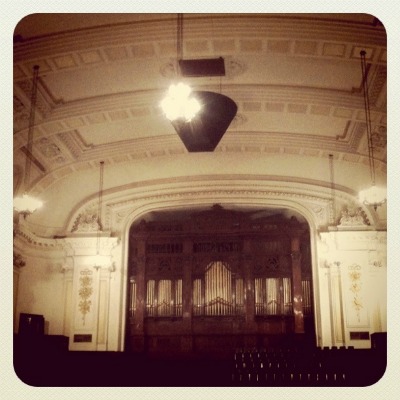 It’s a grand ballroom and not so long ago I attended a wedding and then the Sunday Times’ 100th birthday there. Inside the city hall a plaque commemorates South Africa’s role in wars against Germany and its campaign in East Africa.

From there we walked into the Jameson Raid remembering the “outlanders” who wanted more rights in the ZAR republic, who, having spent their money starting businesses feared they would be taken away from them.

Near Market Square we stopped near the spot where the city’s first mailman would stand and call out the names of those who had received letters. “Joburg was too disorganized then to distribute mail”. Then on to the Barbican (being beautifully renovated after an arduous battle between the city and it’s owner, Old Mutual). The pretty building was referred to as a skyscraper then and today its Joburg’s poster child for urban regeneration. 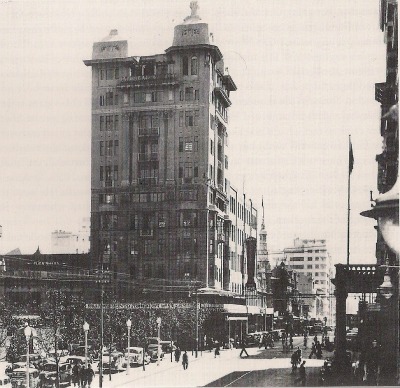 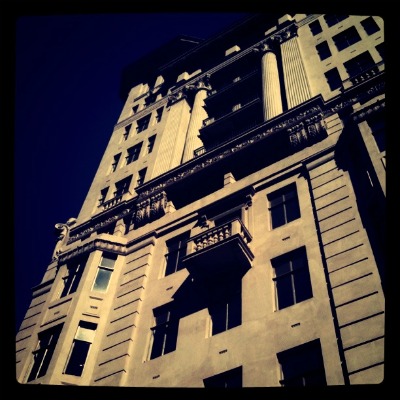 Around it are just memories as many of the famous historical sites are now parking lots (always a big issue for the city, Tania pointed out).

Nearby on the corner of Rissik and President Streets, the first traffic light had been installed in 1927. On its first day of operation a traffic marshall stood beneath it directing the cars in case they weren’t sure of how to respond. Ironically the light was not 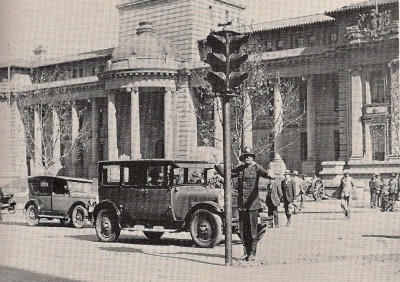 working order on the day we visited – because of street repairs in the area.

We travelled past what would have been the city’s first toy shop and into what remains of the shopping arcades and past the bricked-up remains of Trades Hall where the 1922 Miners Strike was declared. Then onto the commercial district past the city’s first department stores. I remembered the OK bazaars building from childhood and that being eye-level with lots of small glass compartments filled with pick ‘n mix sweets and other treasures. Then to the Markham building, a rarity in that it has stayed that way since it was opened in … 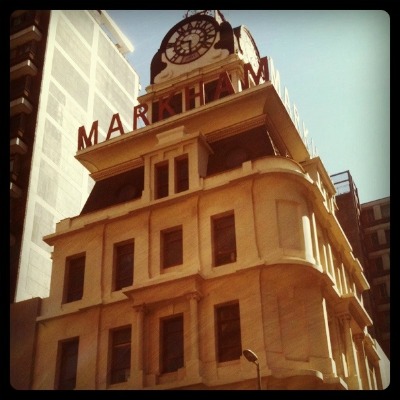 My favourite stop though was at the Ernest Oppenheimer park, a gorgeous piece of inner city landscape with interesting sculptural pieces, a teak replica facade of the Rissik Street Post office whose clock tower looms above, a basketball court, play areas and benches, and a garden fit for play. The park’s historic impala had been updated and restored to pride of place (you can read more about them here). It’s been part of the city’s efforts to rejuvenate green spaces. This is the city’s future, a place for all who live in it, for making a new and shared history. As we walked out of the park and back to the Library Gardens I felt good about that. 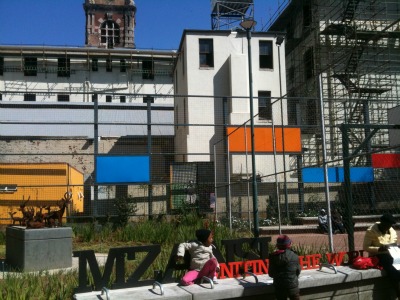 * Past Experiences has a menu of Joburg city tours. The historical photographs were provided as part of the tour. UPDATED 03/09/2011 Enjoyed this history of the Barbican from Mrbaggins1 journal, Dreams, Schemes & Themes – Here’s to Maniacs, Visionaries and Wide-Eyed Dreamers.