The centerpiece of the exhibition is an exquisite geometric patchwork of maps of third world countries presided over by large fly-swatters covered in maps depicting different US states. The swatters hover over the world’s less fortunate and crawling over the map to form the letters SWAT are a collection of plastic spiders and flies. It’s a “beautiful” work, one that lets you discover layers of significance the longer you study it. Of course some of those layers are not deliberate but that’s the beauty of what happens when art meets an audience and is apprehended and interpreted.

Boshoff is a word artist, playing with letters and meaning. In this exhibition he is more a statement artist. He has created large works using single words to conjure universes – PIG (a work made out of what looks like hand made paper interwoven with human hair, and enmeshed within it fragments of religious texts that all have a view of the unclean pig) and BULL (which brings to life the idea of a bull market and the bullshit of a capitalist system that underpins it. The piece is covered in thorns calling to mind the crown of thorns and running across it are quotes about money and finance. The ones that caught my eye were “Most people work hard enough not to get fired and get paid just enough money not to quit” – Geoge Carlin and this one “A rich man is nothing but a poor man with money” – WC Fields. His distaste for the US’s cultural imperialism and the more negative aspects of globalized culture underpin much of this exhibition.

Among the other works are some incredible sculptures and word poems. My favourite of these was “Intercourse”, looping words across the page and referring to towns in the world that are named “baby”. But I would have to say the showstopper is a statement piece at the gallery’s entrance in etched aluminum titled “Racist in South Africa, 2011”, which seeks to redefine what that label means in 2011. It’s extremely powerful. 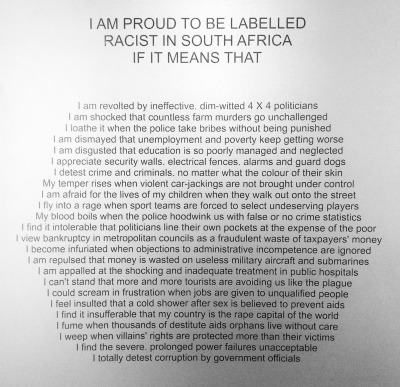 There is too much to capture here so best you get to the Goodman Gallery and take time to see it for yourself. It’s a challenging body of work, as interesting to the eye as it is to the mind.