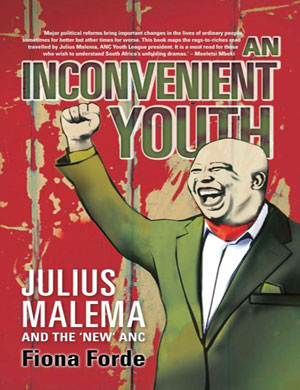 In a recent court appearance his accessories of choice were a phalanx of men in black bearing large arms.
Host of the evening Anthony Altbeker questioned whether “An Inconvenient Youth” was a biography or a slightly premature obituary. By the end of the evening most agreed that Juju Malema wasn’t fading out of history any time soon.
Forde had interesting things to say about him – stories about his impoverished childhood, his being reared by the women of the family and still influenced by them, his first tender won at the age of 16 to supply school uniforms, his love of Breitling watches and matching his belt and shoes to the leather on his watch strap. She described him as full of contradictions and strange little quirks. While waiting for his future to be decided by senior ANC leaders fashion was foremost on his mind.
“Everything I have come to know about him in public, is not what he is in private”.
“Democrat or demagogue?”, asked Ferial Haffajee.
“Demagogue,” said Forde. “He was written off early as a buffoon,” but she called him “cunning because he did something jacob Zuma failed to do… When Jacob Zuma came to reside in the Union Buildings he embedded himself with the elite and forgot the masses”. Malema has one foot in either party and has latched onto the biggest constituency in the country. “He talks to and on behalf of the masses, which he has no right to do”.
In response to a question about why the black middle class has adopted him as a leader, Forde pointed out “I don’t think we fully understand the black middle class. There are a lot of people who don’t like what he represents and the fear that he puts into our democracy”. 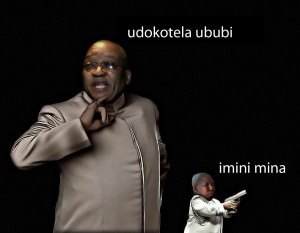 She compared him to Robert Mugabe who gives the West “the finger” and becomes attractive for what he opposes. I thought it interesting that powerful personalities like Mugabe and Malema find ways to overshadow what they actually stand for by just putting up an opposition and sowing fear and enmity.
“Malema puts the spotlight on places where people have been afraid to go until now” but said Forde, “He doesn’t represent the youth, he trades on them.”
In my book (not so much a book, more like a post-it) Malema articulates the needs and aspirations of a generation not heard from. But his kryptonite would be a society where the media create the space for these voices to be heard and represented, and business creates work opportunities and government sticks to ensuring our education system enables young people. We all have our work cut out for us.
Malema’s story helps us to understand all of politics in this country, the speakers agreed, and also reminded everyone that corruption didn’t start with him. Sadly, there seems to have been a “seamless transition from 1994”, said Forde.
I also endorse her view that “there is more to South Africa than four of five men in the ANC”, and that we have “focused for too long on personalities”.
It was an interesting night, and I am keen to get started on the book. The room was full of conversation, the lights of the city creating a dramatic backdrop for the speakers – lots of diamond-sharp points from the high-rises that overlook Troyeville. And we ate, and drank, and thought, and spoke, and left feeling as if we knew so much more about this place we call home, and also a lot less.

6 thoughts on “Julius Malema at the Troyeville Hotel book club”