“This is Mr Matthews your train driver. Sit back and relax. The weather is sunny, the ride is sweet and everything is Ayyyyyyobbbbba (Drawn-out World Cup speak for “just great”).”
I am a fan of the Gautrain #justsaying. In fact I am a fan of any mode of transport that doesn’t involve surgical gloves, hard stares and taking your shoes off. That’s any mode of transport that doesn’t presuppose I am a mad bomber hellbent on the world’s destruction. I’m more like a one-person economic recovery plan, committed to single-handedly rescuing cities from the economic downturn by spending some hard-earned cashola. 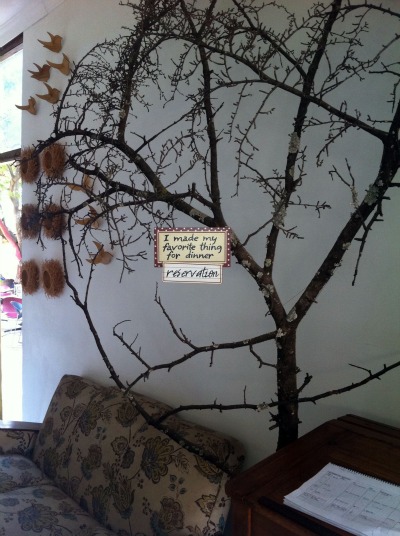 "I made my favourite thing for dinner - a reservation" - Entrance to Papa's, Duncan Yard

For that reason, Mr Matthews’s greeting was right on target especially after having returned from a trip to England last week where border control fixed me with their stony gaze making me feel my interest in studying at the University of Central Lancashire, visiting The Museum of Liverpool and wanting to shop at All Saints Spitalfields was a crime against humanity.
Back to Pretoria.

For years it’s been a place I have visited for work rather than leisure – that’s not counting happy childhood days spent in the cable car above the zoo. Then there’s my teenage view of the place, Pretoria as Apartheid’s heartland, once a chilling place covered in shame and orange, blue and white flags. Later it was in Pretoria that I watched Eugene Terreblanche lead an AWB march down a main street, although it was also in that city that I had an opportunity, as a Sunday Times political reporter, to encounter Thabo Mbeki’s AIDS advisors, a lunatic ragtag army, among them one “doctor” who had written a book about smoking peyote in New Mexico. It was going to be a hard sell for him to prove anything existed. 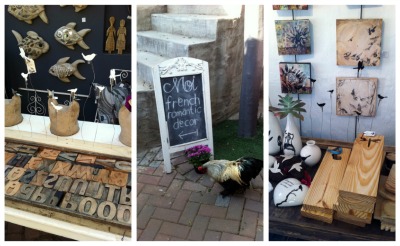 Back to Pretoria circa 2011.
My friend Nikki, of Chic Jozi fame,  and I had a mission – to find out what happens when you take the Gautrain to Hatfield. Not quite like John Speke looking for the source of the Nile, but close. So we hopped the train one weekday afternoon in search of the other end. The train is neat, smooth (the driver too) and clean (Like Singapore, no gum allowed) and it’s an easy R46 ride (pay-as-you-go) from Rosebank Station to Hatfield in around 38 minutes. Time to stare out the window, take deep breaths, think, marvel at the giant mosque near Midrand. No hooting, swerving, cursing or just staring at a numberplate in front of you. 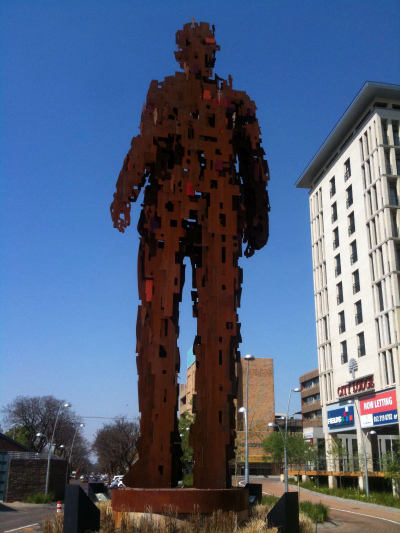 At Hatfield Station we emerged into the afternoon sunlight (Pretoria is also a few degrees warmer than Joburg, extra points). First stop was Marco Cianfanelli’s “Urban Being” who was visible from outside the station. Curiosity led us there. A Pretoria colleague had sent me a suggested itinerary the day before that included a place called Duncan Yard and an Indian restaurant called Mehfil. Sophia’s amazingly curated list of recommendations for Pretoria restaurants is at Pinterest.
We passed Mehfil and all was quiet, having missed the lunch rush. We then congratulated ourselves on the brilliant idea we hatched after we took a copy of the Take-Away menu – to suggest they add Joburg as a delivery area and that we would wait at the Sandton Station for our food. The waiter looked bemused and I swear that he was making circling motions with his finger next to his head when we walked away.
Then it was on to Duncan Yard, across the main road, an odd assortment of higgledy-piggledy buildings joined by narrow alleyways leading into shared courtyards, traversed by a giant shiny rooster who looked like he owned the place (photographic evidence below). Delightful really. Lots of shopping opportunities and a delicious fresh lunch at Deli on Duncan. My expectations of Pretoria cuisine – boerewors, salami and potjie were tastefully shattered by an impromptu (“Tell us what you feel like eating”) artfully arranged smoked salmon salad and home-made strawberry and rose cordial worth returning for.

An antique and vintage furniture store – Die Plaaswinkel – with a fantastic range of old movie posters including one for “Van der Merwe P.I.” and some lovely Art Deco pieces shares Duncan Yard with a great selection of homeware stores, boutiques, a toyshop, florist, and men’s store (bluecollarwhitecollar – great retro decor, with parquet walls). We even spotted a few other names from Parkhurst  – as if the quaint neighborhood feel of that suburb’s high street had been transplanted into Pretoria soil.
It’s cute and chic and girly. And we loved it. [And when rugby season is on you can park off and watch the big game at Papa’s]. Plus we got to go car-less. And only left once we had eaten our fill and procured enough homeware goods to make us long for a comfortable seat on the train home. My one recommendation would be for Duncan Yard and the Gautrain to organize some shopping trolleys between the two venues. Classy indeed.
And while the traffic built up for rush hour – we sailed past the highway – taking with us a different version of the capital city. Next trip we hope to get beyond a 1km radius of the station.

* Duncan Yard is on the corner of Duncan and Prospect Streets, in Hatfield, Pretoria. Established in 2003 by Hansie Prinsloo who took a few dilapidated buildings and made magic. Read more about Duncan Yard here.

5 thoughts on “Joburg to Hatfield by Gautrain”