The splurge on public art has been as much directed at creating social cohesion, as at celebrating this former mining camp’s uniqueness. Eric Itzkin, Deputy Director, Immovable Heritage at City of Johannesburg says: “In the post-apartheid city we are trying to define ourselves and create diverse points of interest”. And while Joburg has had artworks in public prior to this these were about putting the imprint of big men in history on the city map rather than recognising the different communities that have contributed to it. 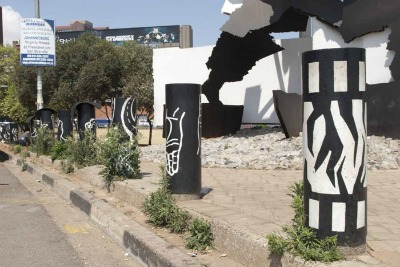 The materials used in many works are also new, their choice as much about permanence and durability  as guarding against them being dismantled and used for low-cost housing or exchanged for scrapyard cash. Although Itzkin says these considerations “should not curb creativity unduly”. And Zunelle Breytenbach of The Trinity Session who have managed a number of projects across the inner-city says: “It is interesting to note that, given the amount of steel used in artworks, none has been stolen. Surprisingly, theft has turned out to be a lesser threat than weathering and vehicles knocking into sculptures.  As confidence and expertise have grown, there may be scope for experimenting with more innovative materials in the future.” 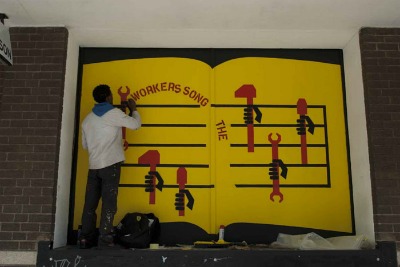 On the day we walked Stevenson Gallery in Braamfontein was preparing for a new exhibition. Can't get art more public than that

Of course the public art spend has also been great for creating jobs for local artists, says Jo Buitendach of PAST Experiences, an inner-city tour company.  What defines public art is its accessibility; “it can be touched, and seen by anyone at any time”. Many of the pieces take this idea further. A sculpture of Brenda Fassie in Newtown entreats passersby to take a seat next her, while the statue of Walter and Albertina Sisulu on Diagonal Street encourages you to put a child on their laps.

Public arts humanises the city. It changes the rules of engagement. “The gallery is everywhere”, as Chris Dercon head of London’s Tate Modern told an audience at Joburg’s Art Fair recently. And while he was referring to the need for art galleries and museums to stop relying on traditional and elite ways in which people access artworks, his statement applies here.

Joburg’s public art puts the city in conversation with those who use it. Of course the ultimate intent is improving the city, encouraging investment and attracting visitors. Although denizens of the inner city are more used to foreigners taking an interest than white South Africans. On the day we visited a man ran up to me at a traffic light near Diagonal Street and implored me “Take me to America”. 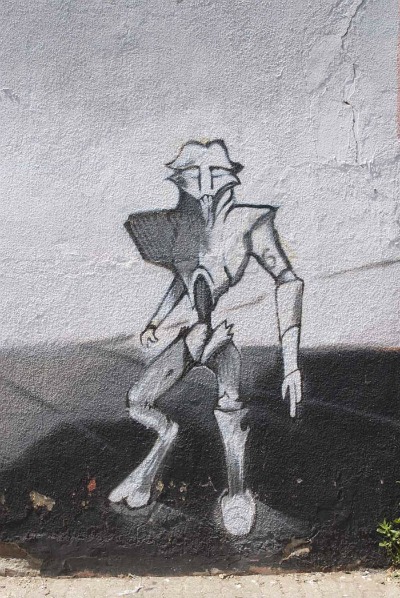 From Alan Paton’s Cry the Beloved Country “[T]hey go to Johannesburg, and there they are lost, and no one hears of them at all” to Phaswane Mpe’s Welcome To our Hillbrow Johannesburg is a “monstrous”, “swallowing” beast. Or in Mongane Wally Serote’s words: “There is no fun, nothing, in it | When you leave the women and men with such frozen expressions … Jo’burg City, you are dry like death”. The new reimagined city strives to change that perception, encouraging the use of public space, entreating people to venture beyond their usual haunts, to see, to stop, to look and in some way to connect with the place. The art on the city’s streets shouts out “welcome!”. And perhaps someday soon that will inspire a new poetry.

*  PAST Experiences does group or customised tours of Joburg’s inner city. Jo Buitendach can be contacted on 011 678 3905 or at past.experiences@hotmail.com 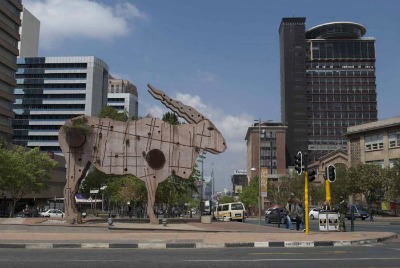 Where: Corner of Bertha and Ameshoff streets, Braamfontein.

Talking about the concrete sculpture with its aloe planters that greets visitors to Braamfontein, Van den Berg comments in his submission statement: “I did not want to make a heroic sculpture … nor a sculpture that would be too immediately located in time and place.” Eland is “a large representation of an eland on a corner where it has long since disappeared”. The sculpture brings to mind San ancestors and the natural environment that has long since been taken over by a growing city. He said he hoped it would prompt “reflection on our relationship to the past, and to the interconnectedness of environmental, cultural and spiritual destinies.” 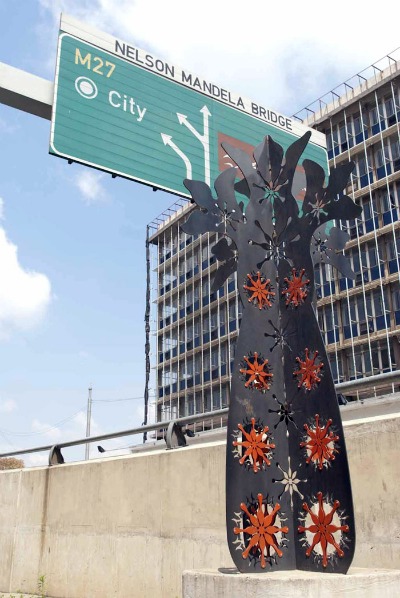 2. Trees, conceived of by the Imbali Visual Literacy Project, built by Claire Regnard with The Trinity Session (2006)

The nine metal interactive tree sculptures dot a route along Juta Street in Braamfontein, now a thriving regenerated part of the city with its boutiques, coffee shop Post and the Stevenson Gallery for contemporary art occupying the western corner. The Trinity Session’s Stephen Hobbs remarked at the launch: “The difference with these tree sculptures is that one can touch and even speak to them, unlike art in a museum”. A number of the trees have intricate cityscapes that can be swivelled by hand. 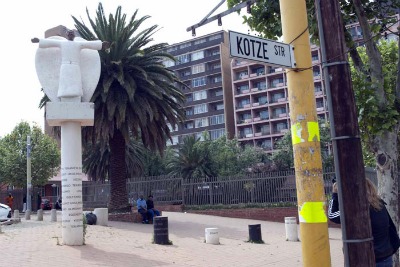 3. Angel of the North by Winston Luthuli from the Spaza Gallery (2010)

Where: Corner of Queens and Kotze streets, Hillbrow.

The five-metre tall concrete winged angel welcomes all to Hillbrow. With its outstretched arms it has been compared to Rio de Janeiro’s Christ the Redeemer, albeit a miniature version. In his brief, the artist wrote: “Its presence serves as a kind of sentinel, and is incongruous with what one might expect to find in this crime and grime-ridden part of Joburg. It does not represent any particular religion, as angels are present in the folklore of many different cultures and generally represent a higher state of being.” 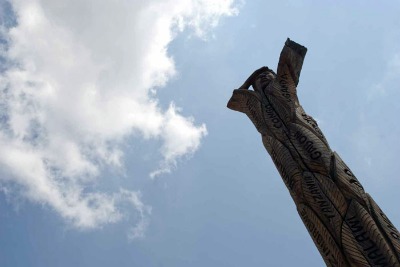 Where: Outside the Governor’s House, Queens Road, Hillbrow.

Guambe’s exquisite sculptures were carved from dead trees found in the area. They stand behind Governor’s House, a single-storey structure “built for the governor of the Old Fort, in about 1908,” writes Lucille Davie on the city’s website.Tree I depicts a young girl looking over the top of the tree towards Hillbrow. Beneath her are carvings representing the different nationalities that have made Hillbrow home. Tree II is a sculpture of a boy pointing towards the city. He stands atop intricate carvings of the cityscape etched into the trunk. 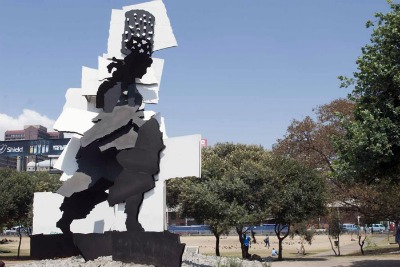 Where: Entrance to the CBD at the tip of the Queen Elizabeth Bridge, Simmonds and Sauer streets

Along Diagonal street women still walk with braziers lit atop their heads selling sheep’s heads “smileys” or mealies as they make their way across the city. The Firewalker, a metal sculpture created by fractured pieces that split apart as you view it from different points pays homage to these women and the everyday activities of city dwellers. In the book Firewalker Kentridge says: “The sculpture demands a generosity from the viewer …It’s bit like lying on your back and looking at the clouds where you recognise certain shapes”. 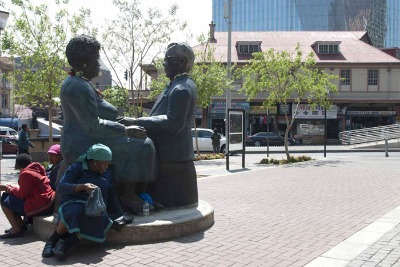 On the day we photographed the clay sculpture city workers were sitting beneath the two struggle icons eating their lunch, testimony to it being a natural part of the landscape. The monument commemorates the enduring love and commitment of the Sisulus to each other and to the nation. They sit holding hands but not directly facing each other (having been separated by Walter’s imprisonment) across from where he once had his real estate office. 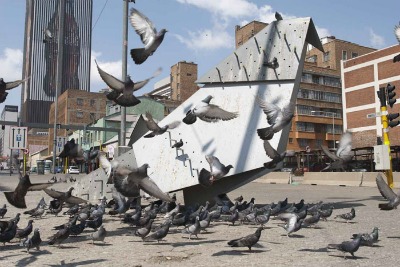 Where: At the intersection of Commissioner and Margaret Mcingana streets, Ferreirasdorp

The three gray three-metre steel pigeons look as if they have been fashioned from origami. As tourguide Jo Buitendach puts it “Most statues have pigeons that sit and poop on them. These pigeons were made for that.” The sculptures have metal rods so the birds can roost on them and the birds are fed by the local community. “Having the pigeons sitting on the sculpture has added to the finality of it,” said Gerhard Marx on jda.org. “It’s part of the choreography of the sculpture.” My favourite piece! 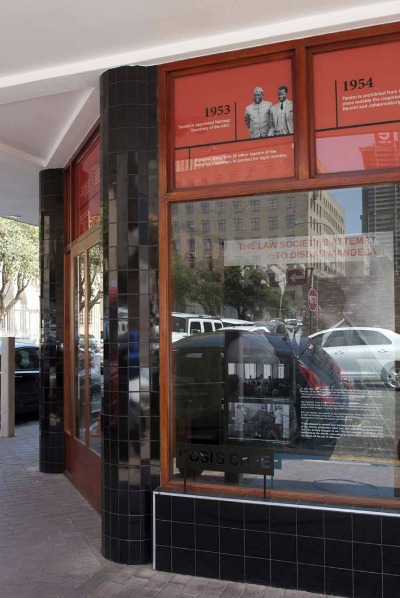 Between 1952 and 1960 this building opposite the magistrate’s courts was the office of Nelson Mandela and Oliver Tambo Attorneys. The site was recently reclaimed from 68 squatters who had made their home in the burnt-out shell, with it’s graffiti scrawled across the door “Happy till we die here”. Reappropriated by the city after a drawn-out battle it’s now a museum, its exhibition artfully displayed on the windows of the building, accessible at any time. It’s reinstatement onto the city’s cultural map puts in place what was a missing piece of South Africa’s important struggle history. 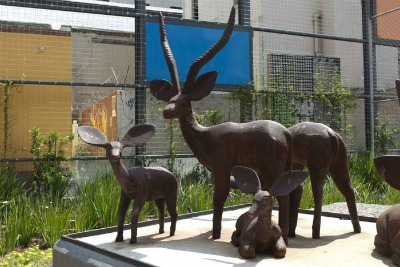 “The impala are back,” says tourguide Buitendach triumphantly. The park originally housed the famous bronze “leaping impalas” until thieves hacked their heads and feet off and sold them for scrap. Today it’s a modern space, made for the city as it is and will be, built for children and adults. There are new impalas, a family of cast iron bokkies, an indigenous garden, various sculptures, a basketball court, benches with steel word sculptures that say things like “JOZI nothing is impossible” and an amphitheatre. Interviewed by Designing South Africa, Stephen Hobbs, Co-Director of Trinity Session says the park stands on the site of the Standard Theatre, torn down in the 1960s, which was “the mining town’s solution to an alternative form of entertainment other than brothels and bars on every corner.” A wooden sculpture pays homage to that. 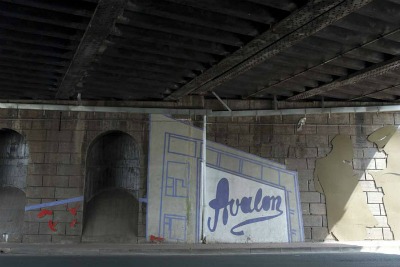 This is the city’s largest public artwork incorporating images from photographs of former Fietas residents. Each detail has been lovingly remembered and recreated, from a wallpaper pattern to the tram system. These are the reminiscences of a once thriving community that was torn apart, of nights spent watching films at The Avalon Cinema (with drink outlawed this was a popular form of entertainment), a famous dancing couple and even unpleasant memories of the pass laws. There’s a contemporary twist with the figure of a trolley-puller, the (mostly) men who walk across the city, their trolleys piled high with cardboard or other recyclable material. The plaque reads: “The subway serves not only as a physical link between the suburbs and the city, but also symbolically echoes the links between areas elsewhere in Johannesburg and South Africa similarly torn apart and left isolated by apartheid.”