Thursday night we headed north to that weird Montecasino (where the sky is always blue no matter when the sun sets, and those cobblestones make enemies out of great heels) for the premiere of Material, the movie that made Barry Ronge cry and that has people declaring that we finally have a local film with the potential to rival a Leon Schuster blockbuster at the box office.

Material stars some of my favourite local comedians – Riaad Moosa, Nik Rabinowitz and Joey Rasdien (and my favourite hairstyle) – in a warm, funny and gentle family drama, with comedy. It’s the story of a Muslim boy from Fordsburg who is torn between duty to his family/culture/religion and the drive to make people laugh – in Melville. A familiar story inspired by Doctor/comedian Riaad Moosa – “you want to be a what?” (and I suspect by producer Ronnie Apteker who went from computer scientist and internet millionaire to filmmaker who eats, prays, and loves movies and believes what doesn’t kill him makes him stronger. He’s right.)

It’s beautifully shot on Fordsburg’s city streets that you will hopefully recognise. And it’s one of those movies, like Jerusalema, and Hijack Stories, that tell a Joburg story, narrowing the lens to a few city blocks that contain a universe (well Forsdburg during the week and Fordsburg on Sunday, aka Zoo Lake, that is). Fordsburg is a big, and well-played, character in the film. (I read that writer and director Craig Freimond moved there for a few months to authentically capture it in the scripting). But the story is also a universal one – of coming of age, and the tussle between old and new values and generations, between what is tradition and what is “modern”, about obedience and loyalty and its conflict with individuality. It’s sad in parts, and uplifting in others, genuinely warm and funny and really worth watching  – in the movie house – and not on a pirated DVD. 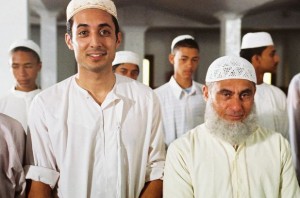 Riaad Moosa and Vincent Ebrahim as father and son in Material

There are some great performances – on screen Riaad Moosa shines. He is sincere without being earnest, and the film’s poignant moments belong to him and Vincent Ebrahim (of Kumars fame), who plays his father. Joey Rasdien is the friend everyone needs as a wingman aptly described on Spling.co.za as being “like the love-child of Seinfeld’s Kramer and George” and Denise Newton is great as Fatima, mother and wife. There are some small weaker bits – I wasn’t crazy for the granny who looked two generations younger than everyone else and did a “Kumars at No.42” interpretation – it strained believability – and the ending resolves a little too schmaltz-ily. But still it’s utterly watchable, and completely enjoyable.

There are also some perfect lines – the opening scene is a classic, not to be revealed here. I would hate to be thought a spoiler but Nik Rabinowitz’s translation of two Yiddish words is a shining moment and must be shared.
“Naches (pride) is when your son is chosen as the Springbok hooker, rachmonis (shame) is when your daughter is”. And after watching the State of the Nation address this week and President Jacob Zuma with the “first wife” of many, I was reminded of Rabinowitz’s line that our president misunderstood the priest when he said “fo(u)r richer or fo(u)r poorer…”

Do yourself a favor and see it.

2 thoughts on “Material, the movie”