Like all true love stories this one has moments of exhilaration, and of defeat. In pursuit of a romantic ideal one must be prepared as much for pure joy as for its opposite.

Along Bezuidenhout street, where it meets Viljoen in the park below Troyeville ridge is a bed. Its plush studded headboard is the stuff that Joburg migrant dreams are made of, Beares catalogues and lay-byes. Its pillows have the texture of velvet and on it lays a duvet, creased as if the bed’s occupants had just arisen from their slumber.
The bed is inviting. 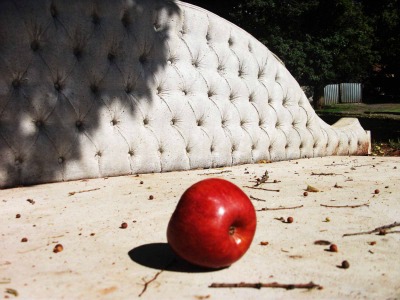 On the morning I visit two birds are using the folds of the duvet as a birdbath. The park is green, the bed resting in peaceful shade.

Artists like beds because they hold meaning. Tracey Emin’s messy bed once rocked the global art world, while the most recent Absa L’Atelier Art Awards winner Ian Grose painted unmade beds. “As a painter, the idea of loss and the traces left behind, became, for me, inextricable with a more personal kind of loss. Thus the work features a bed – the arena of love, death and loneliness,” writes Grose. “I liked that the creases in the linen and imprint of the human figure in the beds reflected the function of painting and photography as a trace of the departed.” 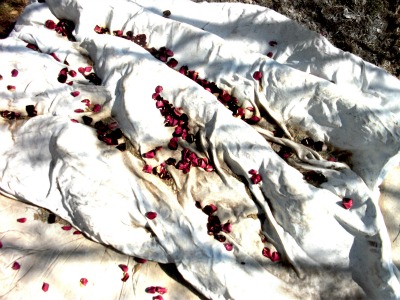 But this bed has its own story. This bed is many things. It’s an invitation, and a manifesto; a place for dreams to be enacted. “Most importantly, says it’s co-creator Lesley Perkes, “It’s concrete but it’s alive” and it’s also a “glorious place to park off”.

Perkes spends her days making public art – handling commissions across our cities. She says: “For months on the school run to Observatory (a nearby suburb) I kept seeing this hideous dustbin, overflowing. A sign on it read ‘Abortion is murder’ and six months later someone had put the words ‘pro-choice’ across it, and done it really badly. The contents resembled foetal overflow…

“I thought why do you drive past this dustbin every day while you preach improvement through public art. It started an obsession with what can we do with very little… The city was supposed to clean that dustbin.”
“Then there was this ugly brick pile of face brick rubble next to my house – that had been there for a year. I called a photographer Johannes Dreyer who lives on the ridge. He’s a great artist with a luminous heart” More importantly to the story Dreyer shared a view of the park where the rubble lay. 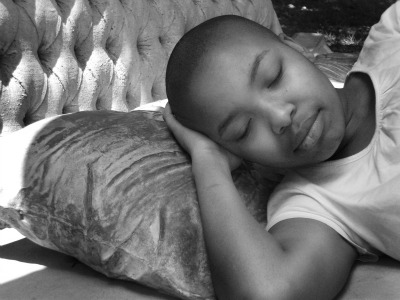 Writing about it, Perkes said: “The offending facebrick eyesore has been in this pathetic state for at least 1 million and two drive-by’s, and, despite the beautiful work done by City Parks once a month in the area, the detritus remains neglected. Further inspired by the bravery of millions of people around the world who are sick and tired of asking for permission to lead a better life, we will no longer let the situation remain habitually dire.

“The truth is, even when it wasn’t rubble, the irredeemable yellow facebrick (my worst) object made no sense: It was just an inexplicable platform with an equally inexplicable thing on top of it; of no apparent use and never good to look at it.”

And so began a project to transform the rubble pile into something that would ignite the imagination. A brave, and daring act, as much as a knight slaying a dragon to rescue a suburb in distress. 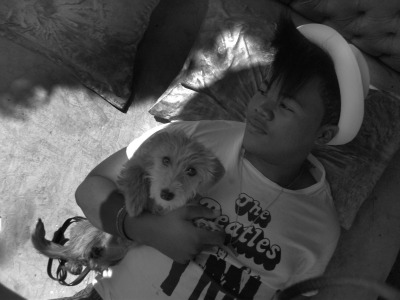 Dreyer’s idea for the bed was inspired by a photographic job he did for a literary journal, where he went to do a portrait shot of photographer Alf Kumalo. Behind Kumalo, a photo of Muhammad Ali lying on a bed, a plush headboard behind him, fixed itself in his head “It looked very Vegas”. In Troyeville with its homeless population, and mattresses in trees, the bed takes on even more meaning. It is wrapped in stories. It plays with ideas. It is about the erotic as much as it is about innocence. “We say yes to all of the stories because it belongs to everyone”, says Dreyer, a gentle smile playing across his face. 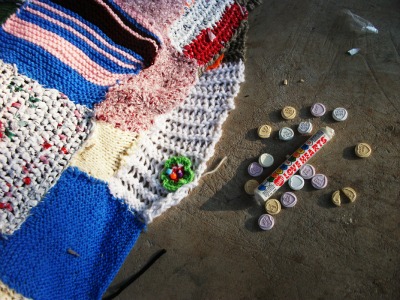 With love from the yarn bombers

To find a headboard to model the bed on the two went off to Primrose “where we were spoiled for choice” and for R450 secured a pink padded one that is part of the “national visual vocabulary”, as Perkes puts it, “the aspirational R8999 mahogany bedstead”. A duvet from China City followed. 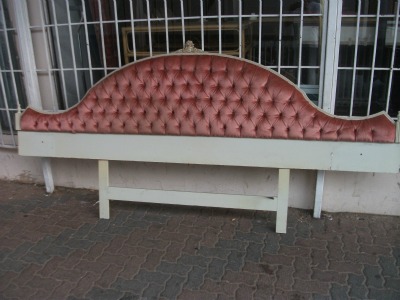 The headboard from Primrose

Dreyer brought in designer and artist Damien Grivas, from Bez Valley nearby, to technically master the concrete formwork. And the bed started to come to life, helped by neighbours who gave space, water and power for its construction. “In the end we rolled the concrete pieces like Egyptians to where it needed to be”.

Perkes says it was a neighbourhood project. It had to be cast nearby because of its scale. “We couldn’t do it on our own. People were always curious, always helping.”

Well not always – the first (and until now, only) act of vandalism took place once the base of the bed had been plastered. Some neighbourhood toughs more keen on mandrax than on public acts of love scrawled “Fukkin poes” in the wet plaster. 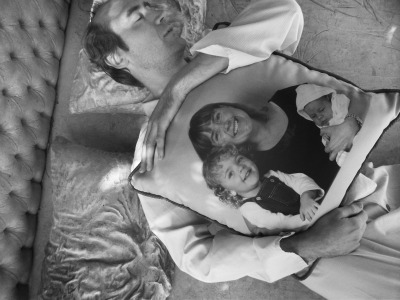 Nobody said it would be easy. Even a love affair with a city has twists and turns and can lead to tears.
Still, it’s now close to a year later and the bed sits in the park in beautiful condition. “We wanted to make something that will last, and doesn’t need much maintenance.” Although Perkes and Dreyer tend to the bed weekly – it’s virtually in their driveway – and are planning to repaint it soon. Over the months that it has been there the bed has become a platform for performance. It has hosted pajama parties, been covered in black to mark the protest against the Protection of information Bill, decorated for Xmas with large dollar signs hanging from the trees, and dressed up for all sorts of other occasions, sat on by poets and artists, and the neighbourhood kids, and even yarn-bombed (some local knitters descended on it and gave it a woolly covering). A few months ago close to 100 people came to be photographed for a portrait project. Most came in their pajamas and read a bedtime story aloud. The bed inspires acts of love – someone once left a big shiny red apple on it. Another time a local homeless man dragged someone’s recently liberated garden plaster cherub to it. The council even fixed the street sign.

Hanging in Perkes’ office perched on the Troyeville ridge, with a view that stretches for miles, is a framed Andy Warhol quote “Art is what you can get away with”.

“The bed wouldn’t have existed if we had to ask for permission for it,” says Perkes.
Writing about her encounter with the bed poet Phillipa Yaa De Villiers records: “People trooped in to ?celebrate the courage to make art in the face of corporate doo-doo and ?government don’t don’t and the tik sniffers in the park sat up and ?wondered just for a second before they whirled back into the vortex of ?their suffering pleasure and innocence walked free unmolested.”

Love can do that to you.
* This piece was first published in Sunday Times Lifestyle. All photos by Johannes Dreyer. To read more about the bed and public art projects created by Lesley Perkes go to http://lesfolies.posterous.com/