Artist Hermann Niebuhr’s Johannesburg is many cities. All of them familiar, but each distinctive in its difference.
At his Fordsburg studio, the more than 30 versions hang in one room, a dizzying display of colour and light. There are cityscapes, and the traces of cityscapes, geometric lines that compose Johannesburg’s most famous landmarks and that, on closer inspection, fracture and break apart. In each the sky and city are entangled, the light washing over the buildings warming the city or darkening it, making it appear in turns welcoming, and then coldly foreboding, making it appear real.
For Johannesburg is in some ways an unknowable city, a city of concealment, and of surprises, where hipsters rub shoulders with church prophets and you can find a sheep’s head as easily as you can a pair of Italian brogues. Surfaces are only to be taken for the whole at your own peril. 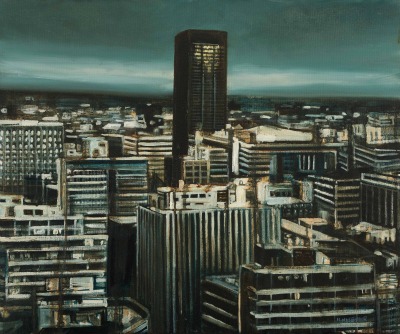 I have stood atop buildings across the city, from Braamfontein, to Anstey’s Building on Jeppe Street, Lister Building to Main Street Life in Maboneng, and each time it’s with a sense of incredible privilege to be raised above the city, able to survey the landscape, to own the view. But in this city the view is fraught, because as your eye adjusts from grand vision to detail, you are thrown by the lives scurrying beneath it, the burnt-out corners, the bricked in entrances, and the broken bits. There is a menacing side to it. This city can turn on you. 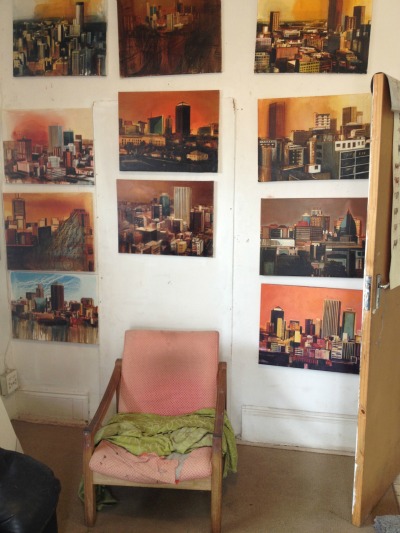 When Niebuhr speaks about it, he does so with affection, laced with realism.
He says: “You drive around in the day and it’s all bustling, trading and noise. But this city is premised on gold, it has a subterranean story. At night that subterranean story makes itself at home above aground… When the sun goes down, Joburg is a transgressive zone”.

This is Niehbuhr’s fourth exhibition of Johannesburg. And each has added another layer to his catalogue of the place. “Night Ride Home” was his first in 2005, the story of the city seen as you drive past it, in a blur of light and colour. “When I moved back in 2001 it was the ‘forbidden city’”. Joburg then was in the midst of its urban decay. 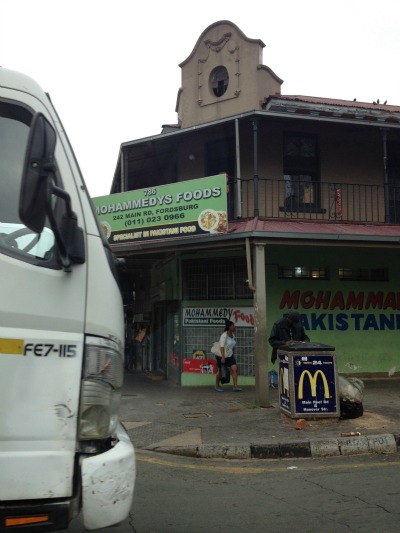 His second was “Night Shift” in 2008. For that he photographed the foyers of buildings in Hillbrow, capturing the signs of the buildings’ former lives, painting them in oils as if to fix a part of them in memory, and in history. The style was Edward Hopper-esque; the colours vivid and yet the mood one of melancholy. His third exhibition took you to the outskirts of the city. “Mine” dealt with the mine dumps that are Johannesburg’s disappearing landmarks.

Each is an examination of a space shaped by its history as a city of gold, one built on the pursuit of shiny objects, to some extent blinded by them. It’s a greedy place, socially engineered by the ground beneath our feet. Gold brought as much poverty as it did riches and searching for a shiny future is what makes Joburg’s pulse race. “City Chromatic” is what happens when Niebuhr’s lens zooms even further out, taking in the city’s architectural edifices. 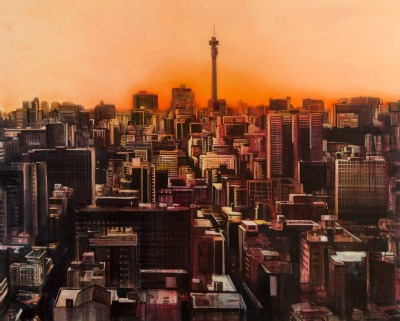 The paintings are suggestive of the life that’s not shown in them. They depict a momentary suspension of the noise, the people, and the drama. In them the moods of the city are on display, the gold-tinted sunsets, the broody rain-filled afternoons, the quietness of dusk and the stirring of night.
Niebuhr says they are about what “what you see and what you don’t see. You start to train your eyes. There are clues”. There are hints of the stories and lives that swirl about the place. As the viewer you are compelled to know what is going on, “to unearth it, discover, and get closer to a truer story”. But there are lots of stories and each has a place in this mythical city. 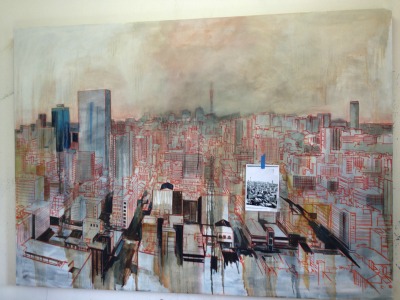 From a distance the paintings have the precision of photographs – an exactness of the grid – while up close they have the richness of oil paintings. Niebuhr paints from photos that he takes. He mentions that a photographer friend offered him some images to paint from that he had really liked, but when it came down to it, he couldn’t make his way using them. It wasn’t his city. It wasn’t his view.
The exhibition has been a year in the making – It began with leaden skies, a series of darkened paintings. “I thought it would be all Hitchcock, dark film noir and then it morphed into drawing the city with red. I started introducing colour, applying stains and washes. The grid gets put down and then I pour over the layers”. Using turpentine over oils, the colours run and are muted in parts, creating their own patterns, their own activity, swirling down, dissolving parts of the buildings, erasing others, leaving faint traces. Parts are washed away. So for all that built solidity there is a sense of the ephemeral, solid edifices diluted. 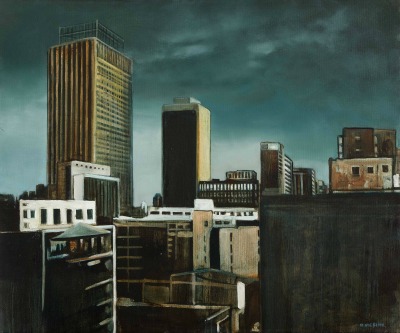 “I use photographs but I am quite familiar with it. I know each building and that allows me take certain liberties as its believable as the city. Having painted it a couple of hundred times its’ familiar subtext is established. I can explore painterly techniques, thinking ‘what will it look like if I paint it like that …”
Niebuhr’s familiarity with the city has come from him walking the place. But on any day and on every day his studio in Fordsburg offers a view of the city that beckons to be captured. Below it Main Street throbs with life, on an afternoon the cacophony of traffic sounds, taxi’s hooting, cars speeding to the city centre, traders and their customers makes its way along the balcony reaching into the first floor of the Lillian Road Artist Studios. 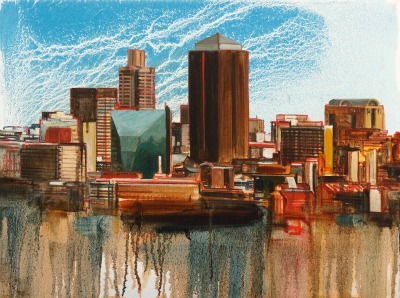 “There’s something about the positioning, and the confluence of forces on the doorstep of downtown Johannesburg. If you sit here of an evening, there’s the rush hour and madness as the sun goes down. Then you hear the hawkers pulling their trolleys across Main Street. It’s pageantry. I have stayed here until 3am and the time zones are determinate. Each brings something different.”
“It’s romanticisation to call this city edgy. We are on edge most of the time. This is an arena of hopes, fucked dreams of wealth. In Joburg the gangsters watch other gangsters to see how to be one. And if you see someone in a fancy car who looks like a gangster they probably are.”
But out all that scariness Niebuhr make things of beauty. And it’s satisfying, he says, precisely because the subject is so problematic. And ironically his paintings will probably end up hanging in homes across the Northern Suburbs, appreciated by owners who would never dare venture into the real city. 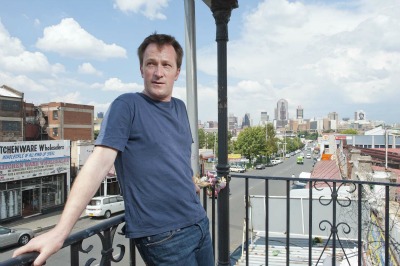 He laughs, ”It’s our job to distill it. I’ll do the heavy lifting, and turn it into a work of art and then anyone can own it.” I ask whether this exhibition means he is done with Joburg, and he replies: “It’s just getting interesting”.