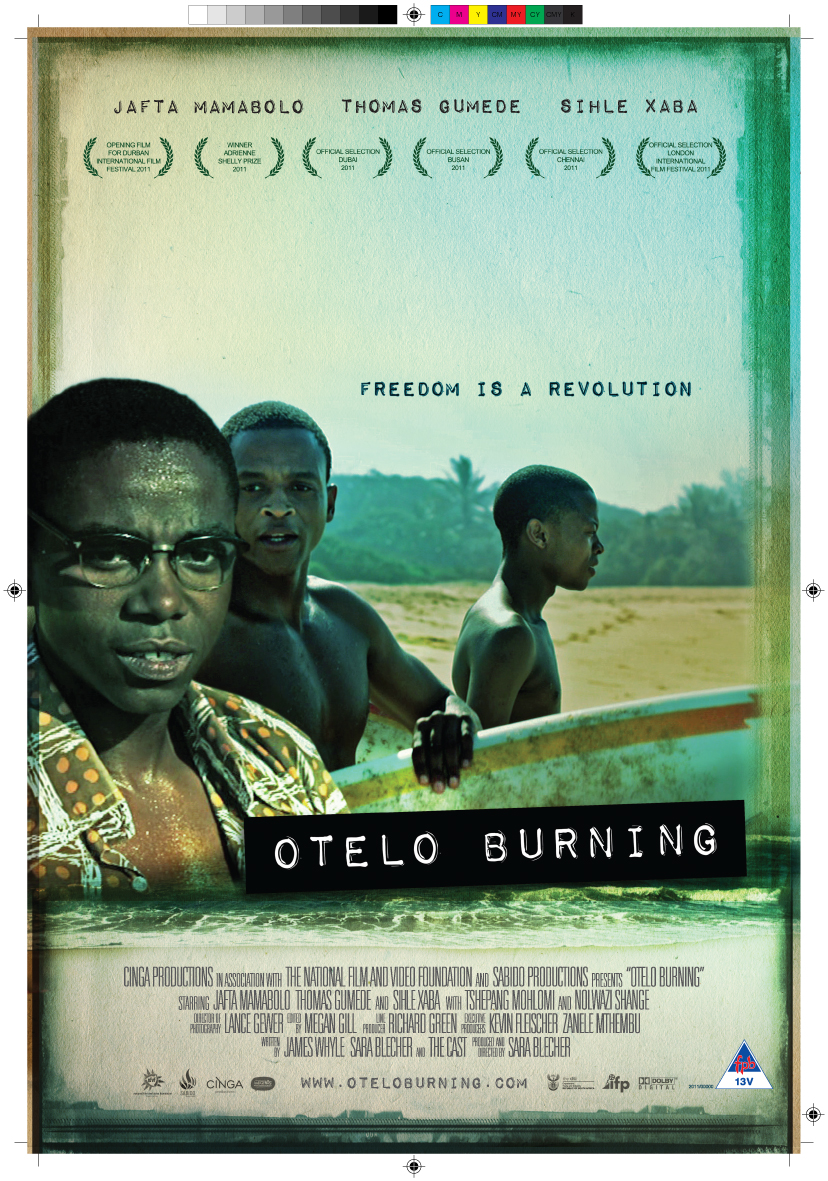 Xaba is a lifeguard for Ethikwini Municipality. From Lamontville, about 15km out of Durban, he’s also the inspiration for the story behind the film. It was curiosity about why the township had produced so many of Durban’s lifeguards that led director Sara Blecher to the script.
Otelo Burning is a compelling piece of storytelling; a small story set against a dramatic historical backdrop. It is also a beautiful film to look at, and one that cannot but elicit powerful emotions with its portrayal of four boys whose lives are caught up in circumstances way beyond anyone’s control.
Among Apartheid’s many tragic consequences was that it broke families. The boys are largely unparented save for the occasional smack across the head – which, in the absence of loving gestures, is almost a mark of fondness. All the while Lamontville’s children run the gauntlet between groups of armed Inkatha supporters and their UDF enemies. The township was the stuff of nightmares. And when they dream, they dream of surfing. The water is a place of freedom, their only means of escape. 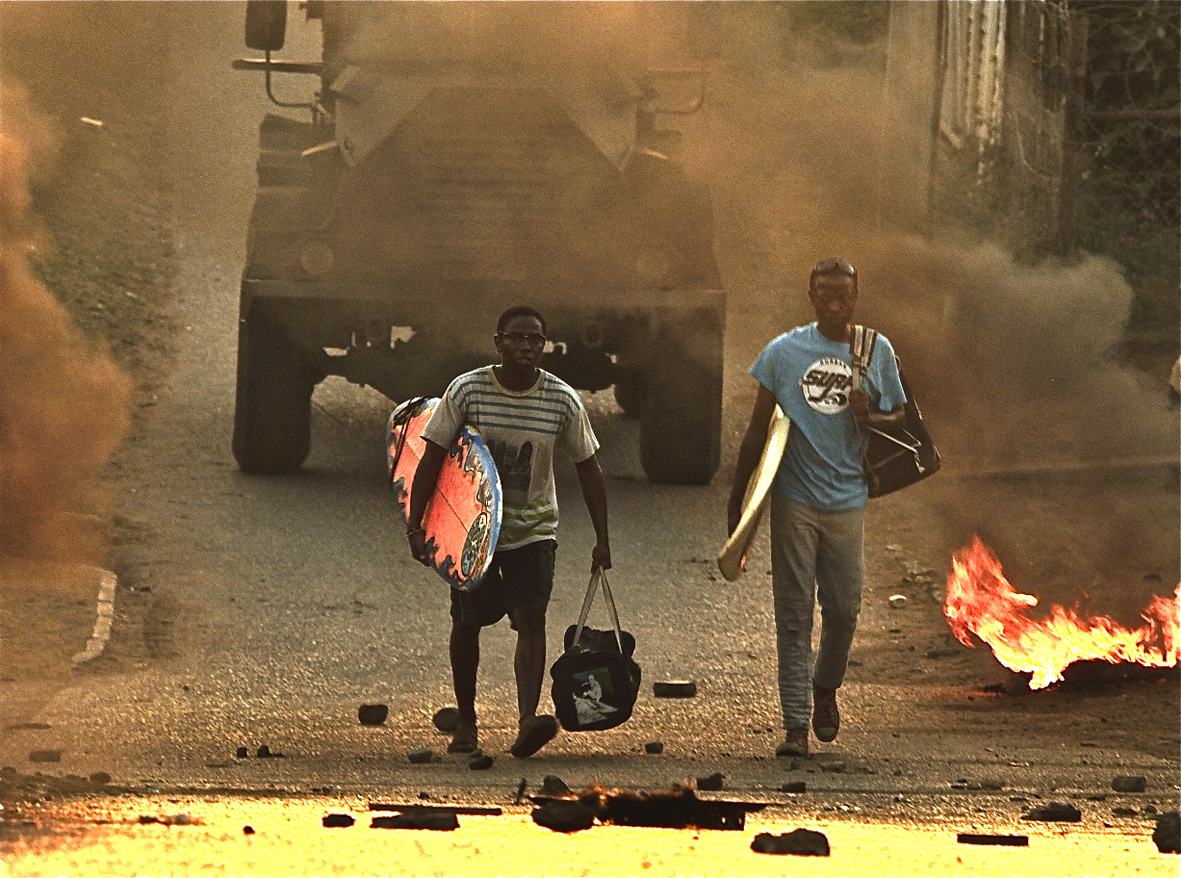 Otelo Burning is shot in Zulu – even the one whitey speaks it – with a plot so engrossing I almost had to be reminded I had seen a film in a language I don’t speak.
Xaba arrives, a little flustered, apologetic, and without a hint of his star status. He looks very different off-screen, slighter. His jaw is softer; he appears relaxed. He attribute it to his new hobby – spearfishing. He had a 5am start to the day. He says he was inspired to change his looks for the film after reading about 50 Cent playing a college football star fighting cancer.
“On screen I look a bit buff from fighting waves. I just had to chomp, chomp, chomp and not exercise,” he laughs. His athleticism is undisputed though. Asked to bring a surfboard to the beach for a portrait shot he comes sliding down the fireman’s pole at the lifeguard station with it held casually under his arm. 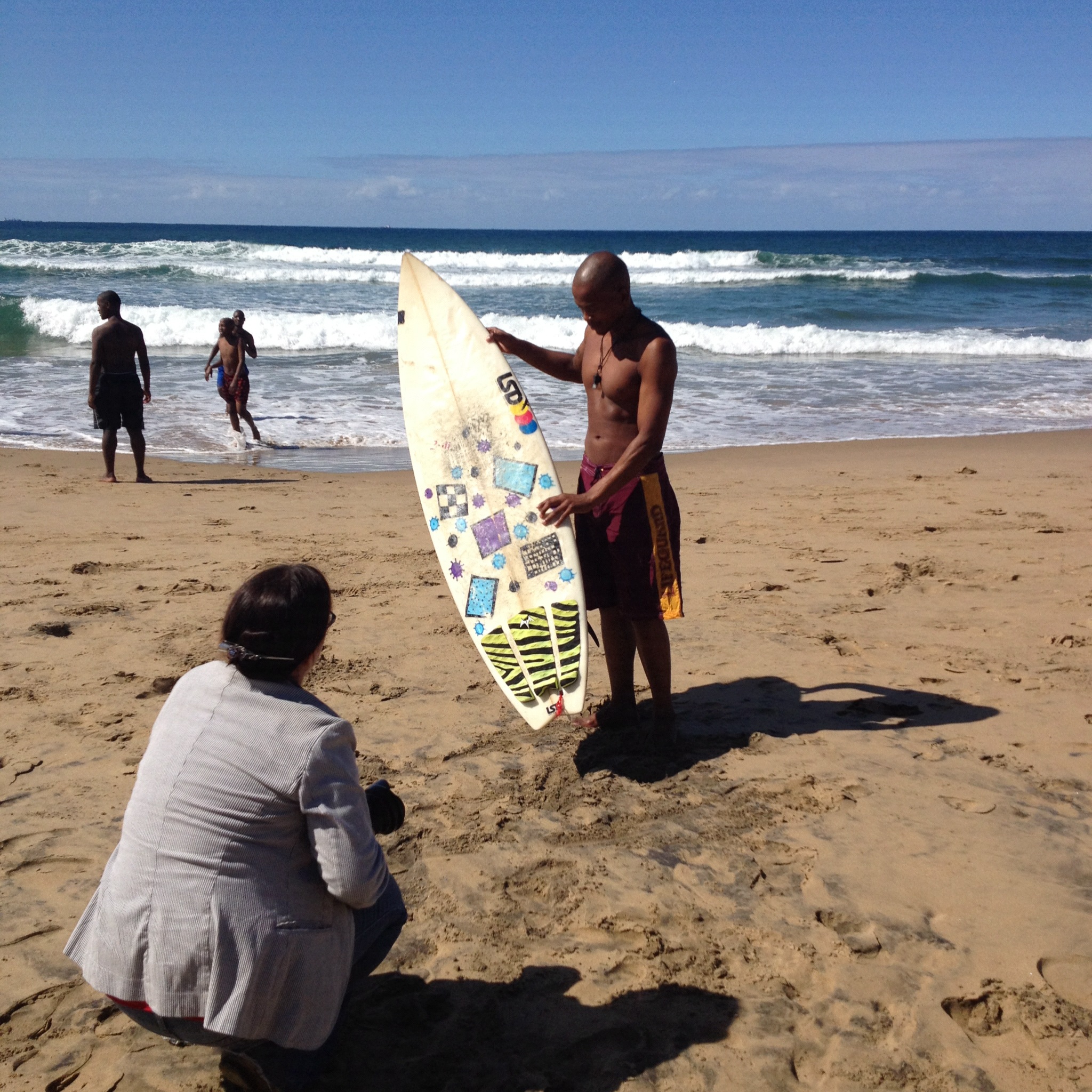 Sihle Xaba gets shot at the beach. Sunday Times photographer Jackie Clausen is in the foreground

We sit on the beach talking about what led to his career as a lifeguard. “We had access to a swimming pool in Lamontville … the only one that survived the political violence. Today, still, kids are learning to swim there.”
“You know people say ‘Never do anything or say anything in front of the little ones’ – but all these events I witnessed… I was 9 years old … I saw people being necklaced – Inkatha guys cornered, someone being burnt alive. When you’re a kid you go to school and talk about it.”
He draws the geography of the township in the sand. The Inkatha versus UDF war wasn’t the only one. There were gangsters to watch out for, and the inevitable standoffs against the police. What he describes is miles away from a childhood.
“Growing up, I would wake up in the township in the morning and then I’m gone. My uncle (who he lived with then) would say: ‘that’s how you grow stronger’. There are so many things… My son will never have that.”
“I don’t remember anyone asking even once ‘where have you been’. In fact one time I remember running home, scared. I ran up the stairs – and the door slammed and I heard the lock. ‘Go back where you came from,’ they shouted. And I had to find shelter.” He laughs incredulously.
His mother lived next to the crossing where Inkatha fighters would access the township. “To go visit my mother, my hair would stand on end – You would be killed for a red T-shirt (code for Inkatha).”
The swimming pool wasn’t untouched. Gangsters fought to control it. But he says there was one man who held onto it. “His name was Sthembiso Madiya. We used to call him ‘sgora’ meaning tough guy. He would fight for the pool. His love and passion was to help kids learn how to swim. You would get corporal punishment for not following his rules. You weren’t allowed to just walk on the grass and jump in. You got a spanking and sent home if you didn’t pass his inspection.” He tells it with humor. 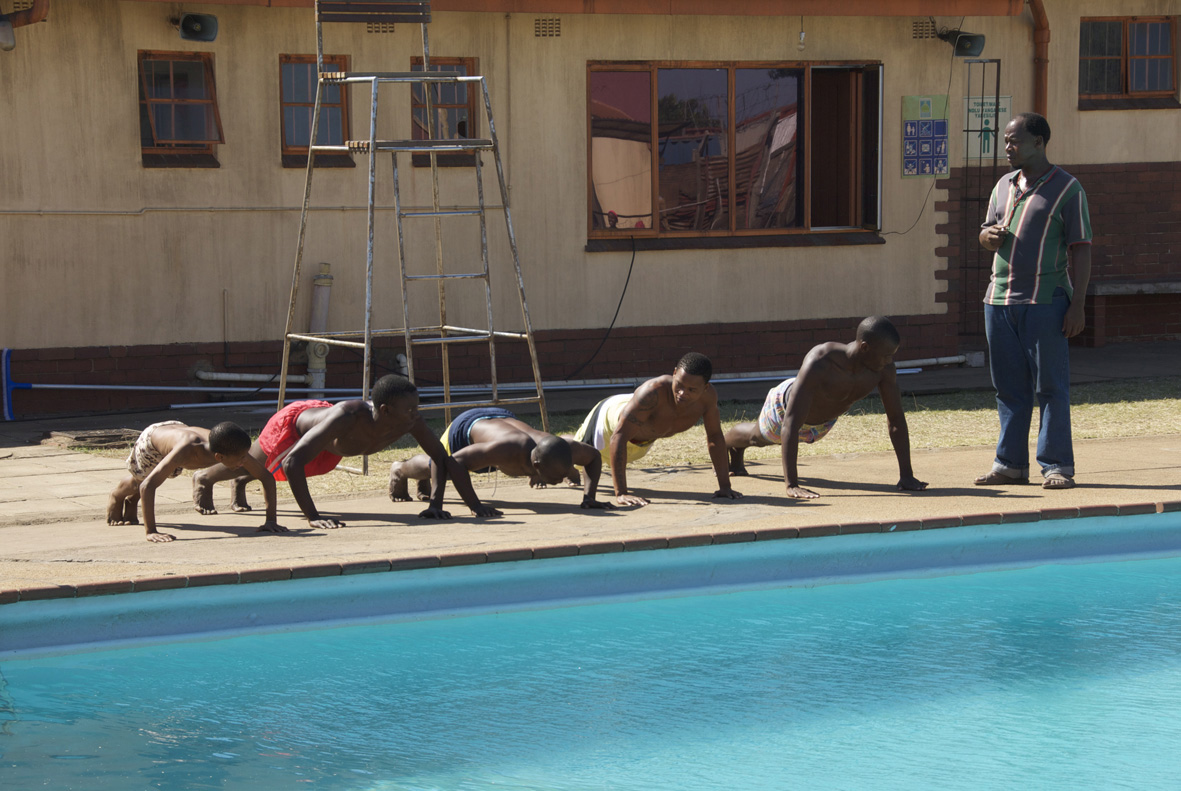 Xaba was seven when he started swimming lessons. “It’s where my lifeguarding career came from.” He is also a champion body-boarder. He mentions how some family members “didn’t like the idea”. It’s an aspect portrayed powerfully in the film. Parents teach children to fear water because of the mythical snakes that reside in it. When one of the boys says he wants to learn “esefa” – the others laugh and ask if he “like Jesus, you want to walk on water”.
Ironically, the water is the last place to fear. The real snakes lying in wait are human ones.
It’s difficult to talk about Xaba’s role in the film without being a spoiler so I’ll only share that at the heart of the story is an act so malevolent it left me reeling. In some ways, one should have expected it, the grand gesture amid so many other betrayals, of children by their parents, young girls by predatory men, of a country at work selling out itself. Those unusual times laid fertile ground for the most horrific acts to flower, with malignant agendas given licence by the raging chaos.

“Shooting the film my worst fear was that it’s going to open up old wounds. Thinking about it was sad – how those people died because they believed they did the right thing. I wish young people could appreciate how South Africa has transformed,” he says. Across from us a group of black kids is playing soccer in the hazy noon light. There are kids wading into the waves.
“We never had this before – it used to be a white beach all the way to Addington – and then a coloured beach. You don’t have to walk around with a dompas in your pocket. We are really privileged.” 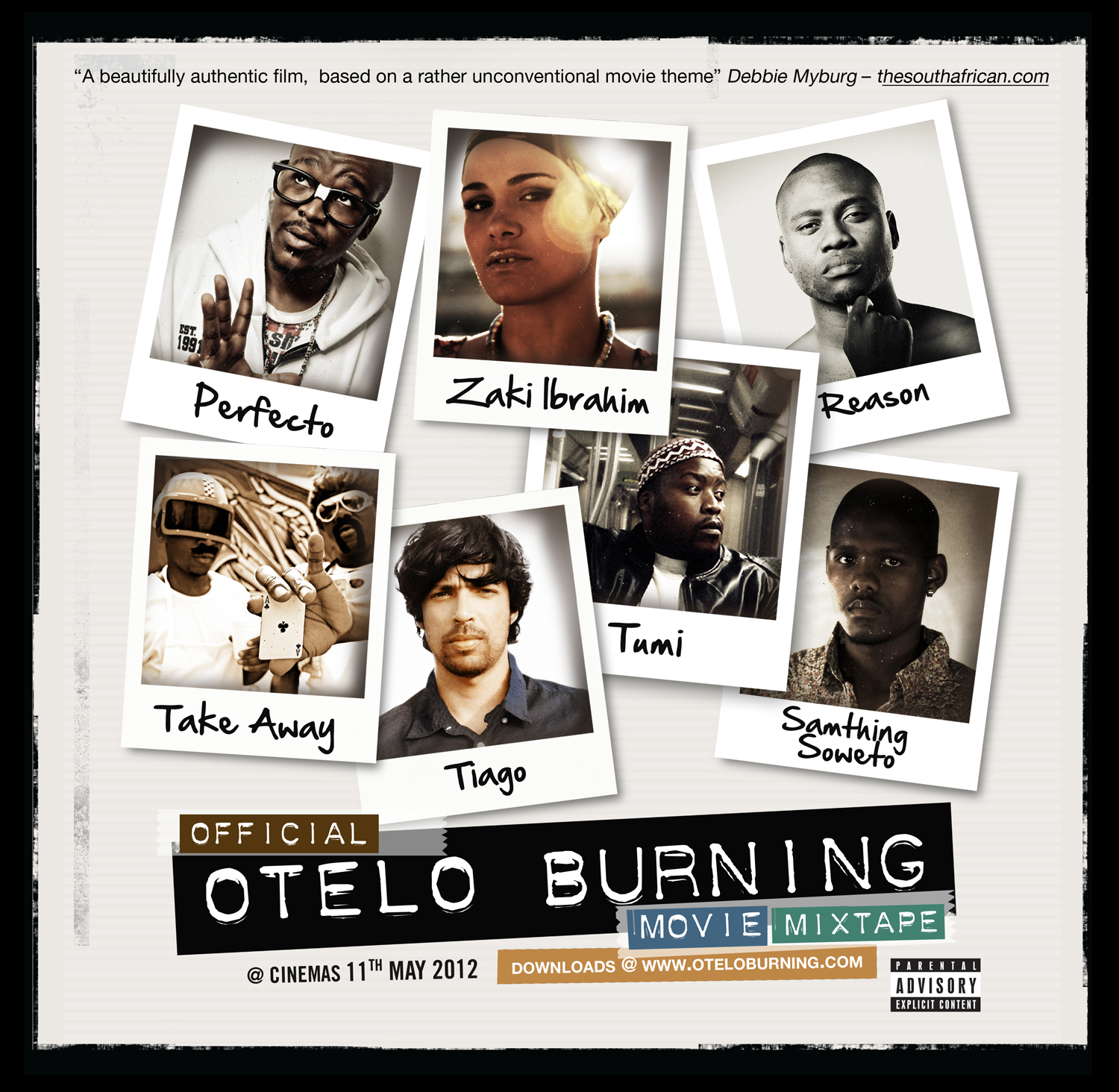 I ask how it felt to recreate that time. In our often-overwhelming present there aren’t many avenues to talk about the past. “Even I thought it’s done and dusted. Life moves on. But I got a bit emotional at one stage. It made me remember going to bed in fear – thinking ‘how did I survive all of this to where I am today?’ For a lot of people I hope it will bring closure.”
The film is intensely authentic. It’s made for a South African audience but I believe it resonates far beyond us. Because it’s an age-old story of children growing up too soon, and a world seen through their eyes. It would probably ring true were it set in Brazil’s favelas or LA’s ghettoes.

He attributes this to Blecher, “Sara is the most amazing director and as we went along, we played it as close as we could to reality. She wanted to use people who were in the township back in the day.”
Xaba got into acting when he auditioned for a TV series “Bay of Plenty”, set on a Durban beach. “I have grown into it. It’s not about wanting to be a celebrity. When I first auditioned I thought I’d be cast as a stunt double – instead I got to be lead actor.”
Truth is he was delayed this morning sorting out a passport renewal for a Nigerian trip, where he’d been nominated for an African Movie Academy Award. (He didn’t win on the night but the film picked up awards for cinematography, and for Mohlomi as best child actor). It’s been notching up awards from Brazil to Cape Town.
We get up to leave the beach. Tattooed across his back are the words “African built”. I walk away thinking how this place still has so many remarkable stories to tell. And I have a feeling that we’ll be seeing more of Sihle Xaba.

* Otelo Burning opened at cinemas on May 11. Do not, I repeat, do not miss this exceptional film. To listen to the soundtrack download it for free here. This story first appeared in the Sunday Times.
Surfing to salvation Sunday Times Lifestyle May 15 2012