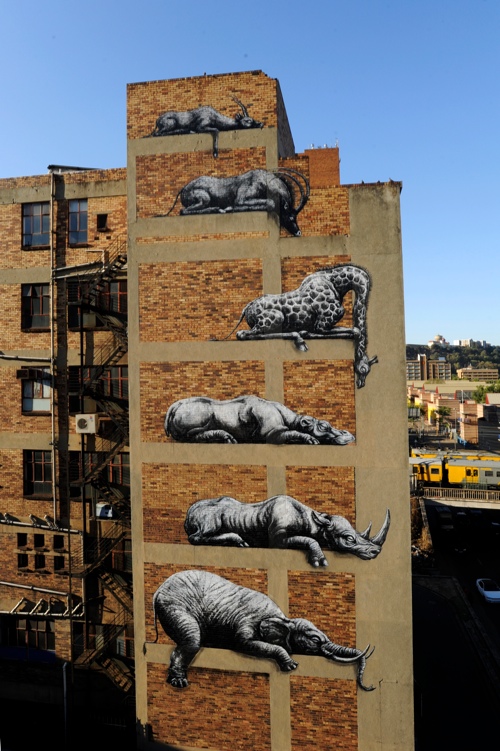 The remarkable work is by Belgian street artist ROA, and is one of a new collection of large-scale murals that dot the eastern part of the city, spreading out from the Maboneng district. It is part of the I ART JOBURG project that launched this month with five artists – ROA, Steve ESPO Powers (NYC) and Remed (Madrid) plus Durban’s Cameron Platter and the pioneer of South African graffiti culture Falko (Cape Town). The brainchild of curator now Cape Town-based Ricky Lee Gordon the project started a year ago with I ART WOODSTOCK and Soweto. 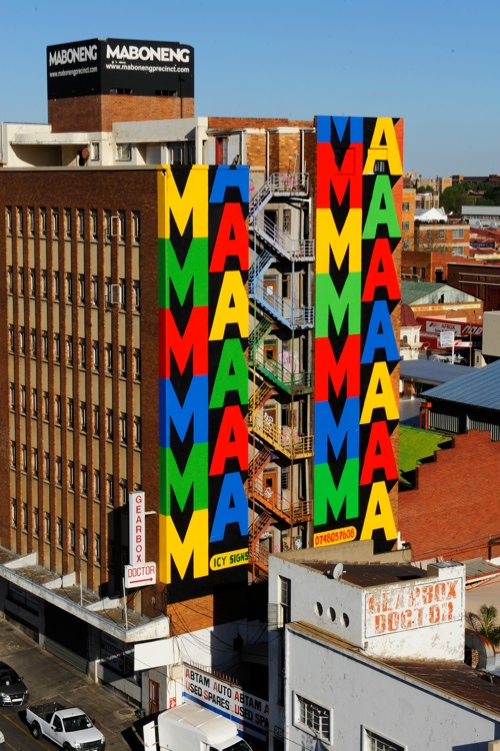 This year Joburg was chosen as the muse that would inspire city outsiders. “Joburg’s representative in this project is Joburg”, he says, when I ask about the choice of artists. The artists brought fresh perspectives, and as a large part of the project involved immersing themselves in the street life, they left as advocates.

For many it’s the perfect canvas: a city reinventing itself; with burgeoning street culture and no major hang-ups about regulations and bylaws. Plus it’s got “more hand-painted signs than I have seen anywhere”, remarks Powers in a video interview.  Gordon calls it a “self-governing city”, as different neighbourhoods have created their own sets of rules. An added attraction is the scale – “when you are working in places like Soweto or Woodstock you just don’t have walls like this”. The project is a collaboration between the artists and adidas Originals with paint supplied by Plascon. As part of it, adidas launched, AREA3, a multi-purpose creative space in Maboneng that currently hosts the I ART JOBURG exhibition which includes installations by the artists, and Falko’s original photographs documenting the start of SA’s graffiti culture in the suburbs of Mitchells’ Plain and Grassy Park – the counterculture of the 80s. It also houses the photographs taken by Martha Cooper, the doyenne of New York’s street art and graffiti culture, who collaborated with each artist and documented the process.

In a video interview Falko says he wouldn’t be where he is today “if it wasn’t for Martha Cooper and Subway Art”, her photographic catalogue of Hip Hop, breakdancing, rap and graffiti culture that flourished in New York city during the 1970s and early 80s. At 69 years old, Cooper is still – “the super president”, says Remed. Her other latest project focuses on comparing two cities, Soweto in Johannesburg and Sowebo in Baltimore. Some of this work is on display. 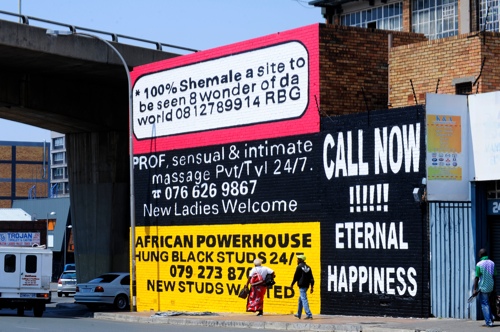 Mural by Durban’s Cameron Platter – inspired by The Star classifieds. Not entirely convinced by this one as it vies for attention with so much other visual litter that is a city staple (including ads for adding power to your penis, free abortions, and consultations with Professor Binga from Banga), but it is amusing nonetheless.

Cities like Joburg are plastered with advertising and commercial messaging so it’s a tricky act to bring the counterculture into the mainstream without compromising the authenticity of these artists’ work. Gordon, who sold the brand on the project, says the artists signed up knowing the brand was behind it. For his part, “they spend so much money on marketing, why not on culture?”Plus, he adds, Martha Cooper was photographing kids in adidas sneakers on the streets of New York in 1979, though he admits: “It’s a balancing act”.

Gordon is a believer in collaboration, something he calls a human truth. “Art reminds us of that”. He lights up when talking about the experience of taking Remed to Mambo Primary School in Soweto, for a mural project in which the school’s kids participated with extraordinary results.

Mural by Remed, who made one of his first stops in the city the Origins Centre at Wits University where he met with the resident expert to find out more about rock art and shamans

The city sites were chosen by Gordon the new-fashioned way. He spent a lot of time on Google Street View identifying suitable buildings and then contacting the landlords. Ten out of the 20 he called said yes, after seeing the artists’ previous work. Maboneng’s Jonathan Leibmann offered three walls for the project. The Internet – with the rise of social media and photo apps like Instagram (“If I don’t photograph this was I really here?” – has also been integral to building the culture of street art across cities globally, creating collaborations and inspiring ideas across what were once natural boundaries. 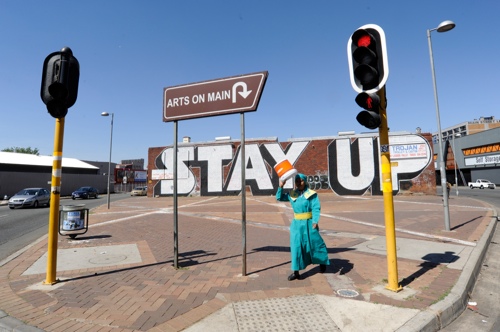 ESPO’s “Stay Up” said to be inspired by a conversation with a young tour guide, Bheki, from Main Street Walks who, when asked for a message, said “Stay Up, Stay Rising”. What I loved about the works is the artists’ spontaneity in creating works relevant to the place

On the street, the works inspire curiosity, beckoning passersby to take a closer look. It’s an interesting phenomenon that by creating new pathways through the city using street art, one challenges the city to offer safer passages. Powers, interviewed about ROA’s work says “What I love about [it] … is that it makes sense wherever he puts it.”

* The I ART JOBURG exhibition is on display at AREA3, 20 Kruger Street, Maboneng. Guided walks of the artworks are planned for October 13 and 20th. For more information and to download the map go to www.i-art-joburg.com This story was first published in the Mail & Guardian. All images used here are by Martha Cooper, shot for adidas Originals