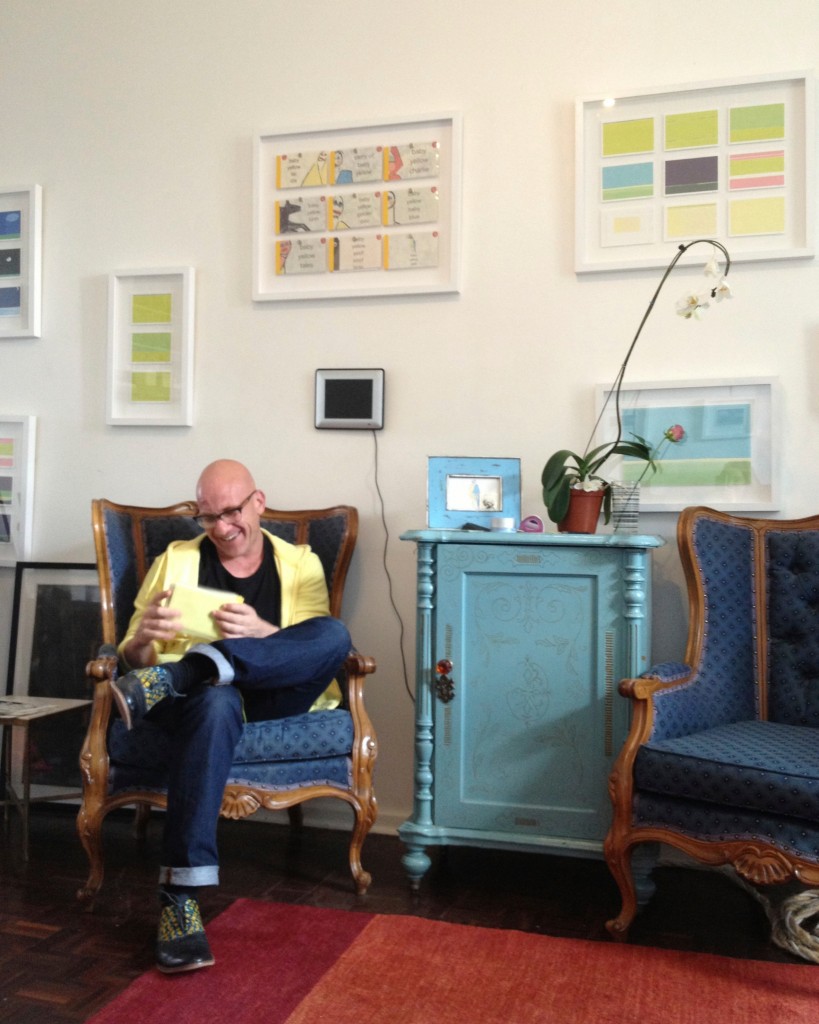 Artist Ryan Arenson dreams in one colour – baby yellow, but produces work in many. For the past two years he has been immersed in creating a six-year-old boy called Baby Yellow, an alter ego conceived on an iPad who since has taken on an unexpectedly rich digital life, drawing, writing books, playing in a band, creating music and enacting all manner of fantasies while he blurs the line between childhood exploration and adult subject matter. Baby Yellow lives in Arenson’s Johannesburg apartment. He inhabits the space as if he owns it… His framed prints cover the walls, the cuttings from his hand-printed books are balled into a jar, Japanese tchotchkes signifying his love of Tai Chi occupy the surfaces. At the window side stands a shrine to him, a mobile gallery filled with the books that tell the story of his life. In another life it was a popcorn machine at a Rabie Road junkshop. Arenson came across it, and in his trembling excitement at discovering what he had only imagined might be the perfect display case for his artistic wares, he offered the surprised shop owner more money than he’d asked for. 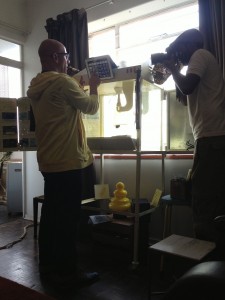 The glass cabinet’s sides fold out to reveal a series of linocuts. Atop it is perched an iPad. Where the popcorn would have once enticingly spilled a series of Baby Yellow books, each page printed and cut by hand on Japanese rice paper are cloth-bound and enclosed by twirled strings, the toggle for each is a miniature black rubber ninja – actually a USB containing the e-book versions. 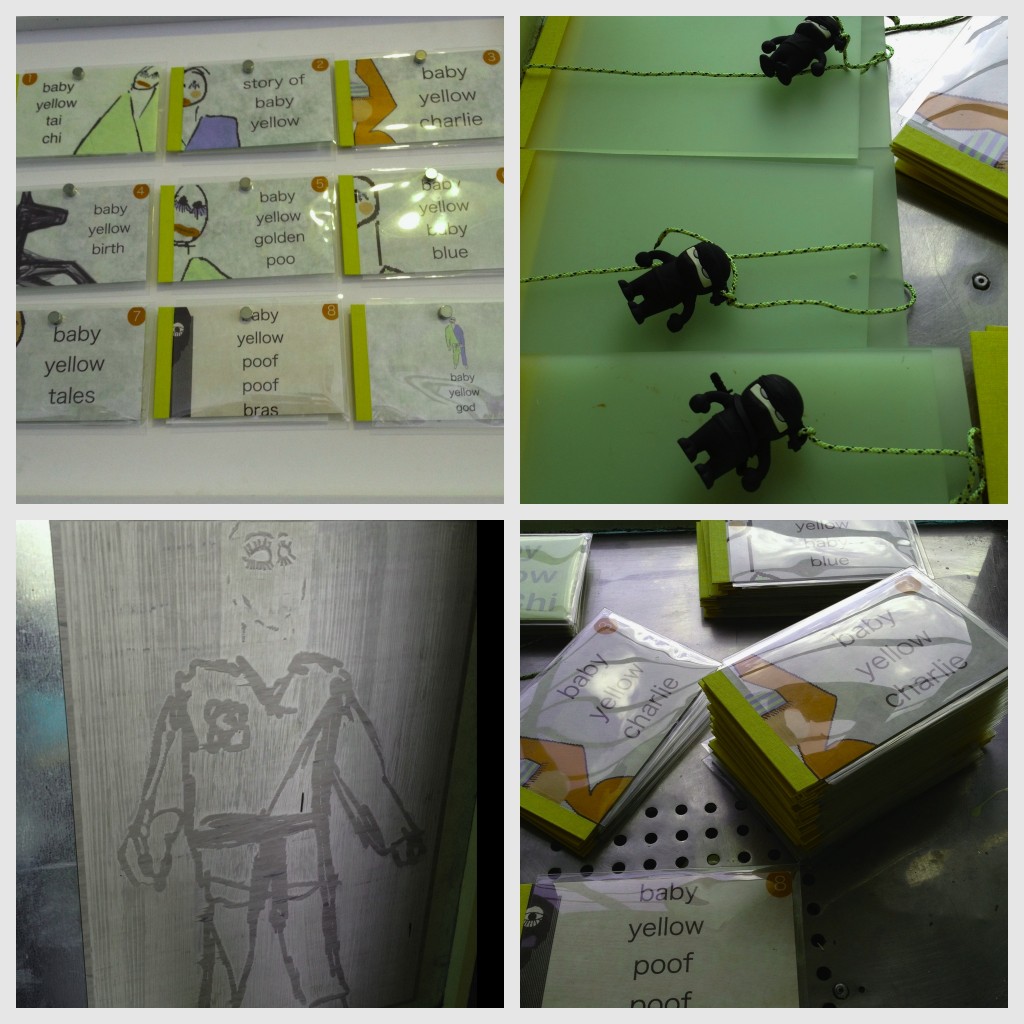 Arenson is a full time artist, and a performer, or as he tells it, with this work – a “high class hawker”. He is consumed by line work, intricate patterns and the process of narrative, and inspired by the landscapes, colours and woodblocks of South African master, JH Pierneef. He studied art at the then Johannesburg Art Foundation, completing a Fine Arts degree at Wits. His first solo exhibition was in 1998 and the recognition of his work earned him the highly prestigious Absa L’Atelier Award and a residency in Paris. 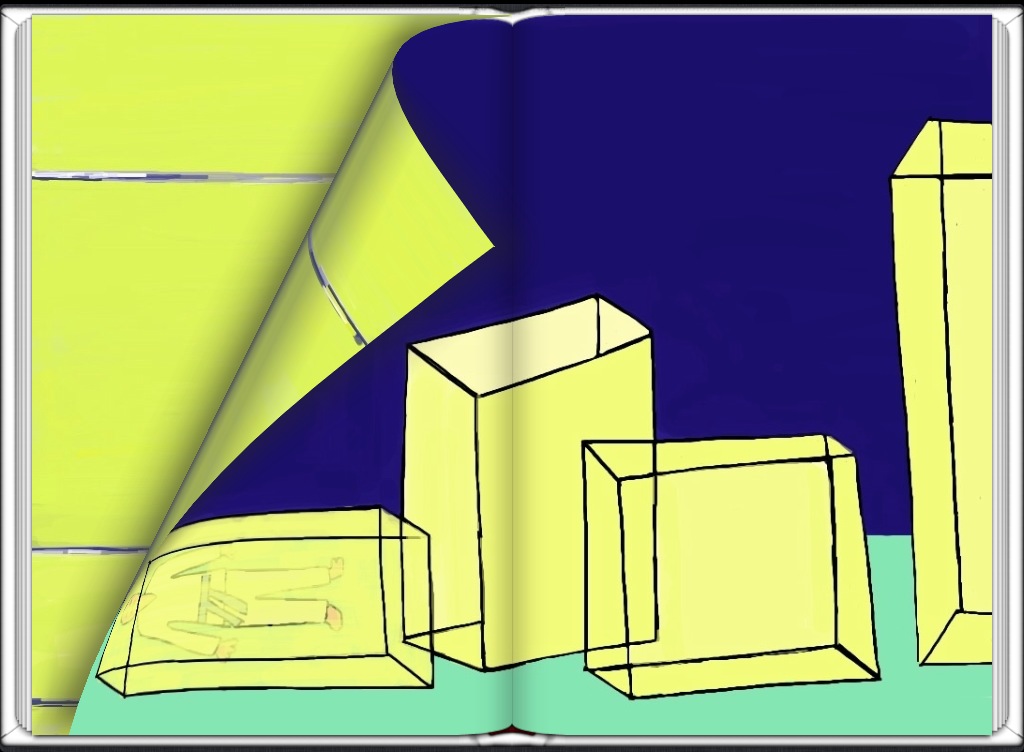 The nine books of Baby Yellow began November 6 two years ago as drawings on an iPad. A crisp memory because it was Arenson’s birthday and the iPad was his gift to himself. “Previously I was doing very detailed line work and engraving. I felt I needed a drawing style that was freer, less self-conscious, less skilled.”

Drawing challenges many artists. “It’s a vulnerable process – almost like writing a journal,” he says. While discussing his inhibitions about drawing freely someone asked “how old I felt emotionally when I drew.” He says: “Being traditionally a painter and printmaker the emotions were those of almost a six-year-old. My hands didn’t express what I felt or what I saw and it was frustrating.” His confidante challenged him to draw like that six-year-old child. “I got an iPad to return emails and for the web. I couldn’t cope anymore… I was too behind technologically.” Then his Apple username was ryantechnophobe. “I had been doing some geometric type of drawing and I wondered whether I could work with that on the device”.

With research Arenson found an application called Brushes, used by artist David Hockney whose exhibition Fleurs Fraiches, had broken new ground in Paris a month earlier. Hockney told BBC World Service’s Colin Grant that the digital tools for making art were extraordinary. “You know sometimes I get so carried away, I wipe my fingers at the end thinking that I’ve got paint on them,” he said. 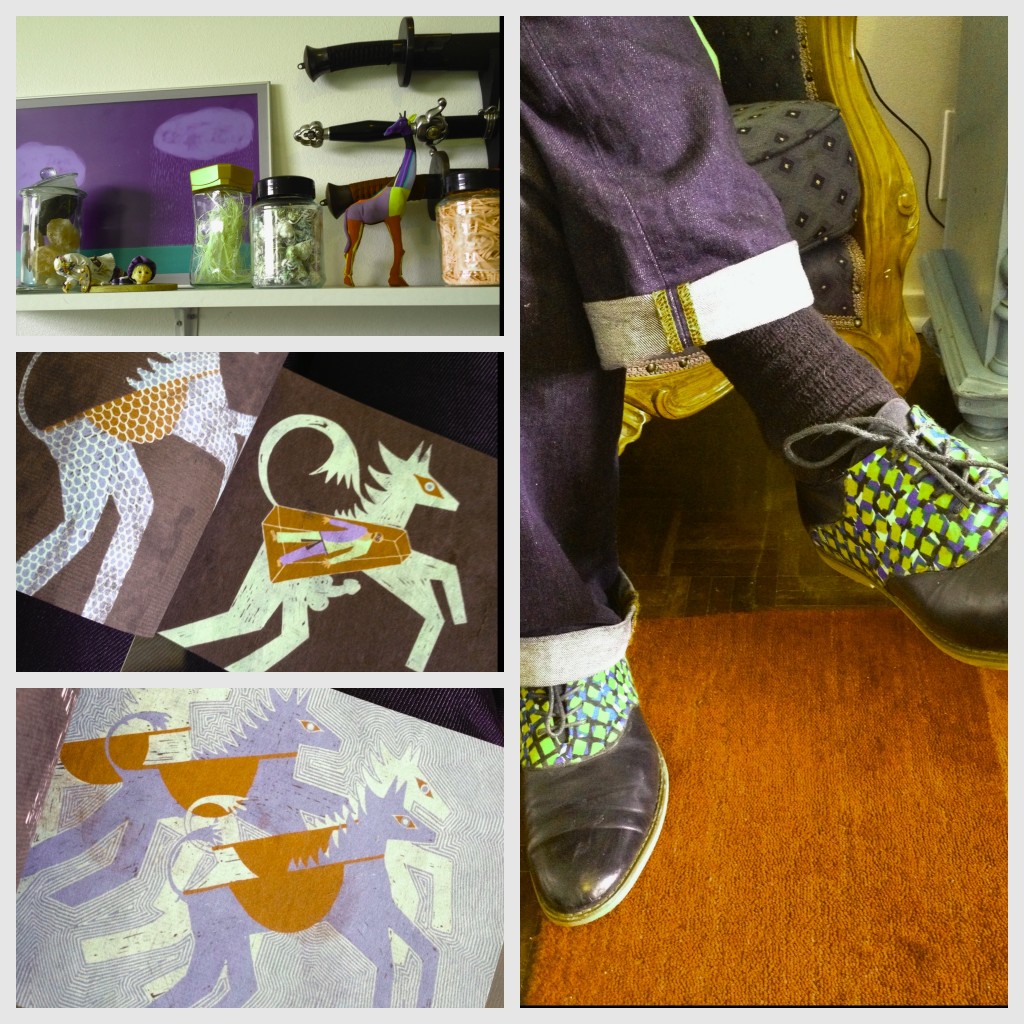 Arenson was deeply influenced by this, but first had to overcome his own bias about computer art. “I’d always thought the computer does a lot of the craft for you. With Brushes there is no cut and paste, no quick fixes. Everything is done with your finger. It felt more like a school chalkboard for me than a computer. It’s not trying to give you special effects. You draw with pixels – little dots – and make lines. Where you are privileged as an artist is that it’s not messy and your color palette is heaven.”

As his intrigue in the aesthetics of drawing grew, his technique refined and his interest in pursuing this line of drawing deepened leading him to create more than 200 drawings. The more he drew, the process consumed him, leading him to seek digital answers to how an artist could possibly retain the integrity of his work throughout the artistic process, from creating to publishing, printing and packaging his artworks. The process involved eschewing the traditional path to the gallery and the work stands as a manifesto of the artist’s right to own his own work. Talking about the gallery system’s power, Arenson says: “I don’t think it communicates to or represents what art is about or what stories people need to be hearing.”

From the simplicity of a little Tai Chi stick-man, Arenson’s narrative became more complex, more personal, more layered. “I felt like I was a bit lost in a forest on a journey and then arrived at the end with nine little books telling me how I was and who I was.” The books bring together all the drawings in a developing sequence. Arenson published them digitally in Apple’s iBooks store as e-books while at the same time producing them as a series of finely crafted artist books, each page printed, cut and bound by the artist’s hand. Every step was the process of careful research – from the digital book application to the paper and inks used. He was obsessed by the notion that “there must be a way to create a sincere digital print and share it at a cost that is effective.” The work’s integrity lies in the way it was produced, as Arenson was never trying to translate drawings into a digital format. 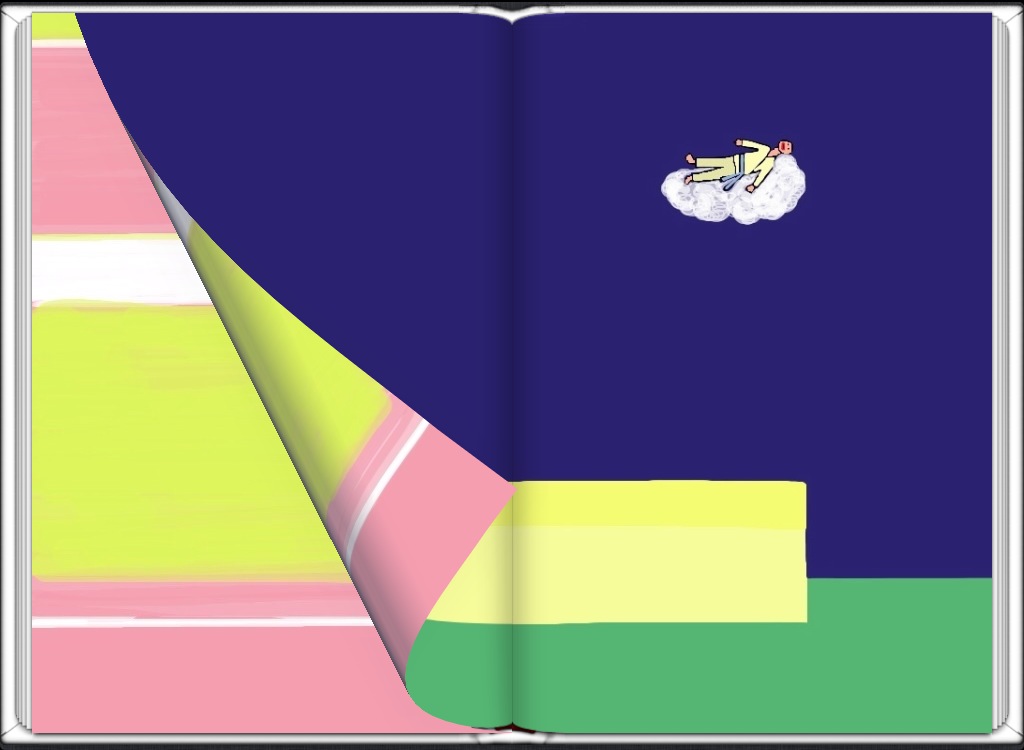 He says: “One day there will be so much self-publishing we will have to invent publishing – I am not sure who said this… what I do know is that if it’s a tablet or a piece of paper I will make work with what is in front of me and use it to express myself … That’s the luxury of the gift of being an artist, a commitment to externalising an internal world. And our external world is so slick, modern and design-oriented while our internal world is so messy, so clumsy and uncomfortable.”

Artistic commitment is incredibly brave, a deliberate and focused journey to an original work, delivered up to an audience, awaiting its reception. For Baby Yellow it’s just the start. Arenson says: “The character has become representational of me to the point that an outfit has been developed… He is a real character who would actually like to interact with people, to be seen and tell his own story, show his own work…” Like any living creature, the story of Baby Yellow is still unfolding. 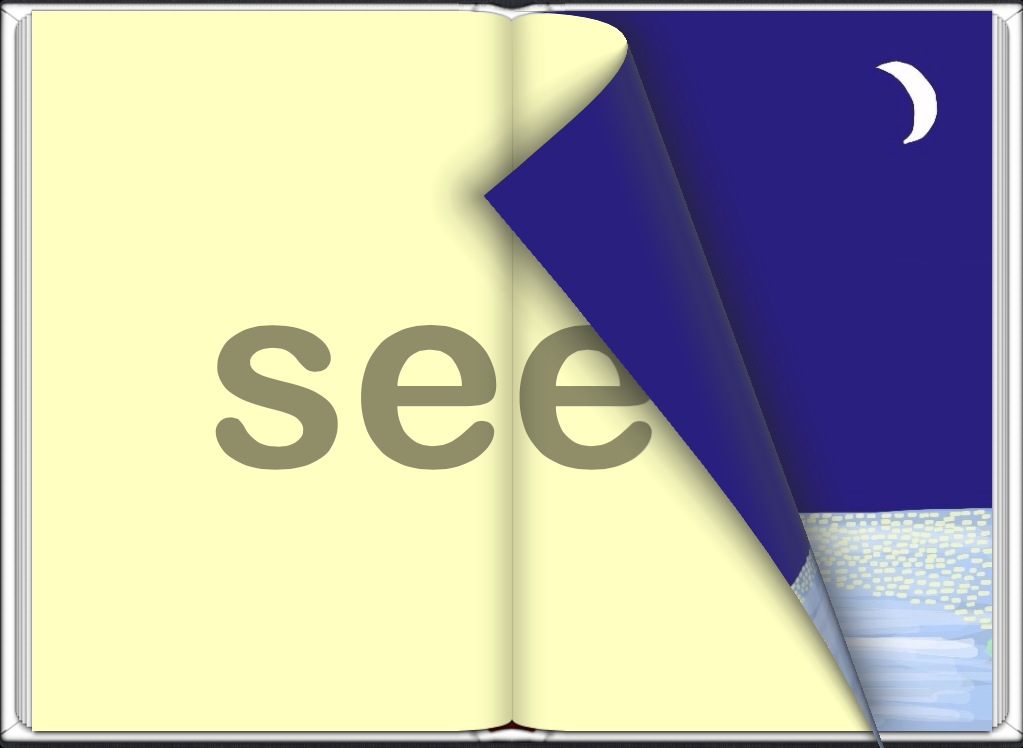 * The Baby Yellow books are available on the iBooks store (US and UK) for $9.99 each.