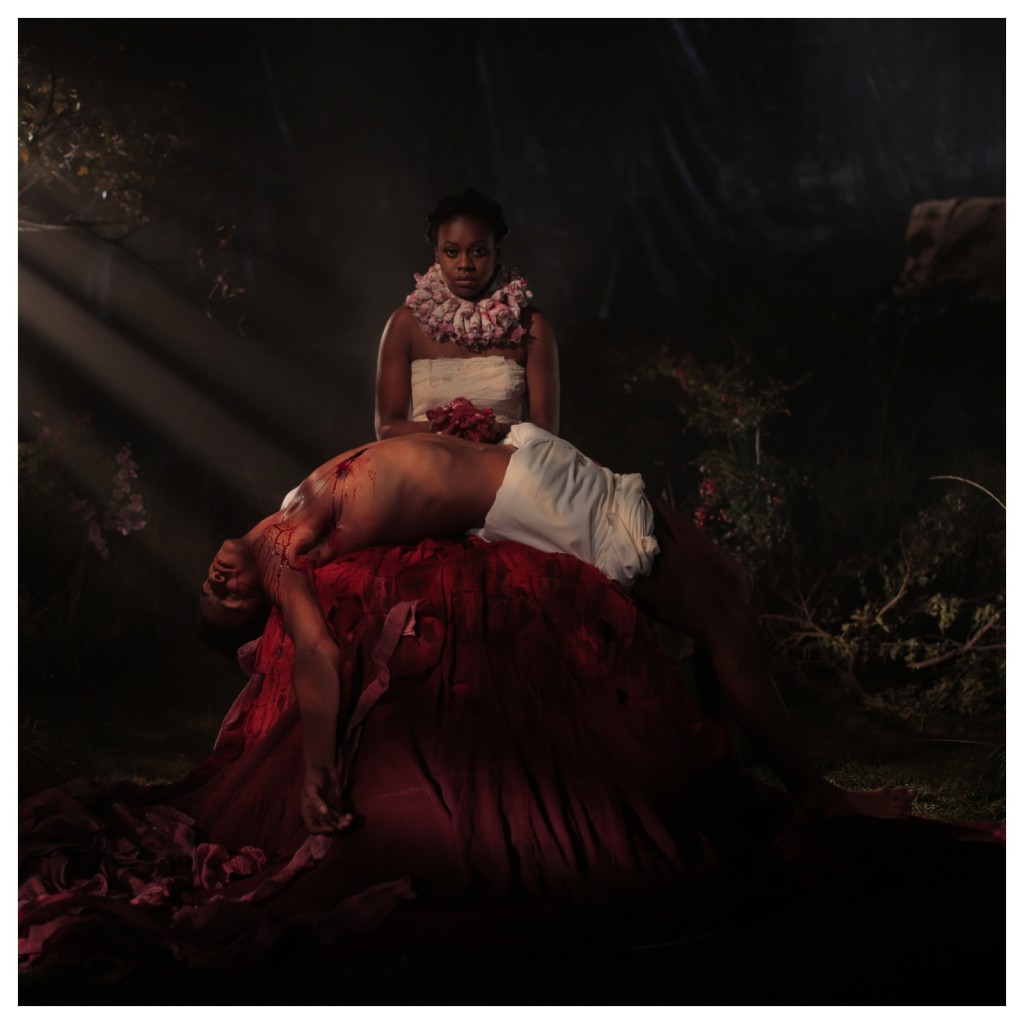 16SNLV (a film classification defining the age at which it is permissible to be exposed to Sex, Nudity, [coarse] Language and Violence) takes on issues of violence and mourning in the public realm. The exhibition’s centrepiece is a video of a woman singing a dirge, the beauty of the funeral song a counterpoint to the image of her gently washing the bloodied and broken body before her. The words, sung in Zulu, are translated as:
“Tortured because of me/My lifetime rock/So that I could hide myself in you/Jesus’ wound
Why the wounds/On Your sides/It’s for blood, it’s for the water/That I must be cleansed
All our mistakes/Are carried by You/All our Sins/Are carried by You”

It is a woman’s body that is being washed. Chiurai made two versions of the video. The second one features a man’s body. Each conveys different meaning, sparks thoughts about the gendered nature of violence, where men are cut down in public and women often in the places they should feel most safe, at home.

Watching the video is like being doused with icy water. I wondered at my own reaction to what is a seemingly gentle and poignant piece, but it makes sense of a growing unease at how violence is the fabric of our lives. Suffused with the heaviness of blood, we become inured, more able to stomach witnessing killing whether it be on Syria’s streets, a Marikana hilltop, or in our own neighbourhood. The death of a British soldier by hacking on a London Street almost difficult to distinguish from a horror film you’ve seen. 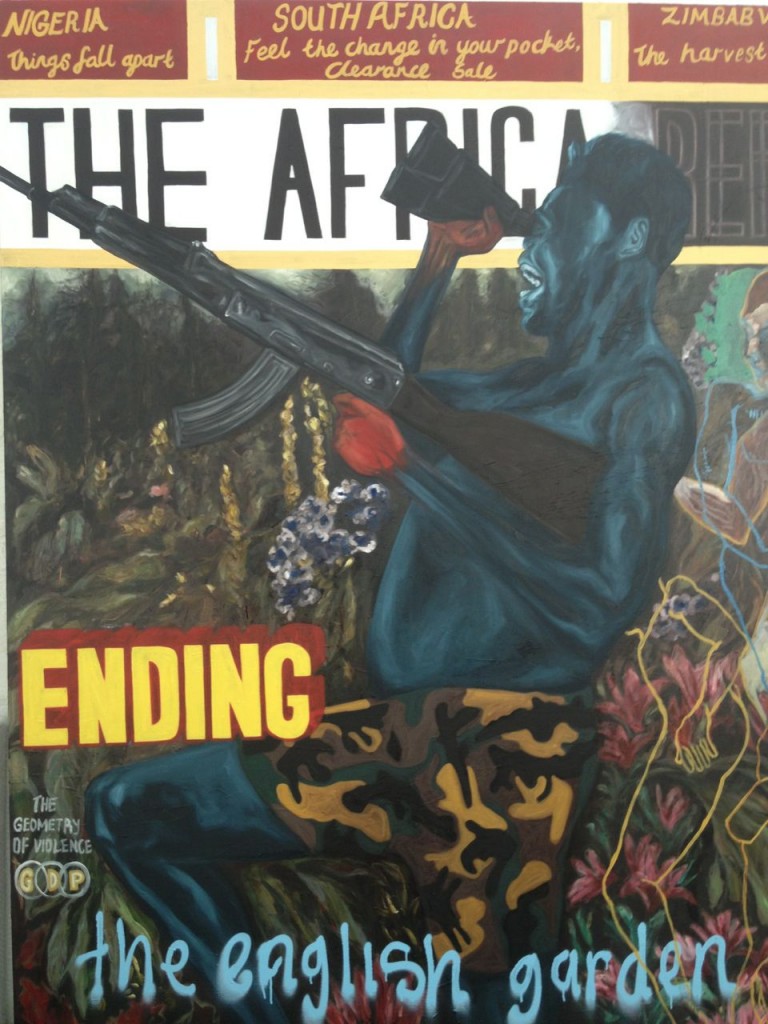 Chiurai’s “ending”. The work references the canonical texts of Nigeria and Zimbabwe. Chinua Achebe’s Things Fall Apart and Shimmer Chinodya stand alongside South Africa’s “Feel the change in your pocket Clearance sale”, a phrase the artist picked out of the newspaper. Our post “colonial” story hasn’t ever been as eloquently written.

The video Moyo is the third in a series he began making a few years ago. The first two looked at the themes of creation and Last Supper. Chiurai says: “The last one is essentially about death.” He had been looking for a specific piece of music to finish the final work. “I wanted to complete all three of them so they are seen as one piece essentially.” He found the song – first heard it performed live by Thandiswa Mazwai. “It is the sound of an old Methodist church song sung when someone passes away.”

Chiurai is softly spoken and needs to be drawn out with conversation. The temperature has dropped. It’s officially winter in Joburg and we are meeting at his studio in Newtown, where the works for the exhibition – large scale paintings, posters and T-shirts are stacked up. On the desk is a book about Goya another titled Art against War. It is unintended but they complete the installation. 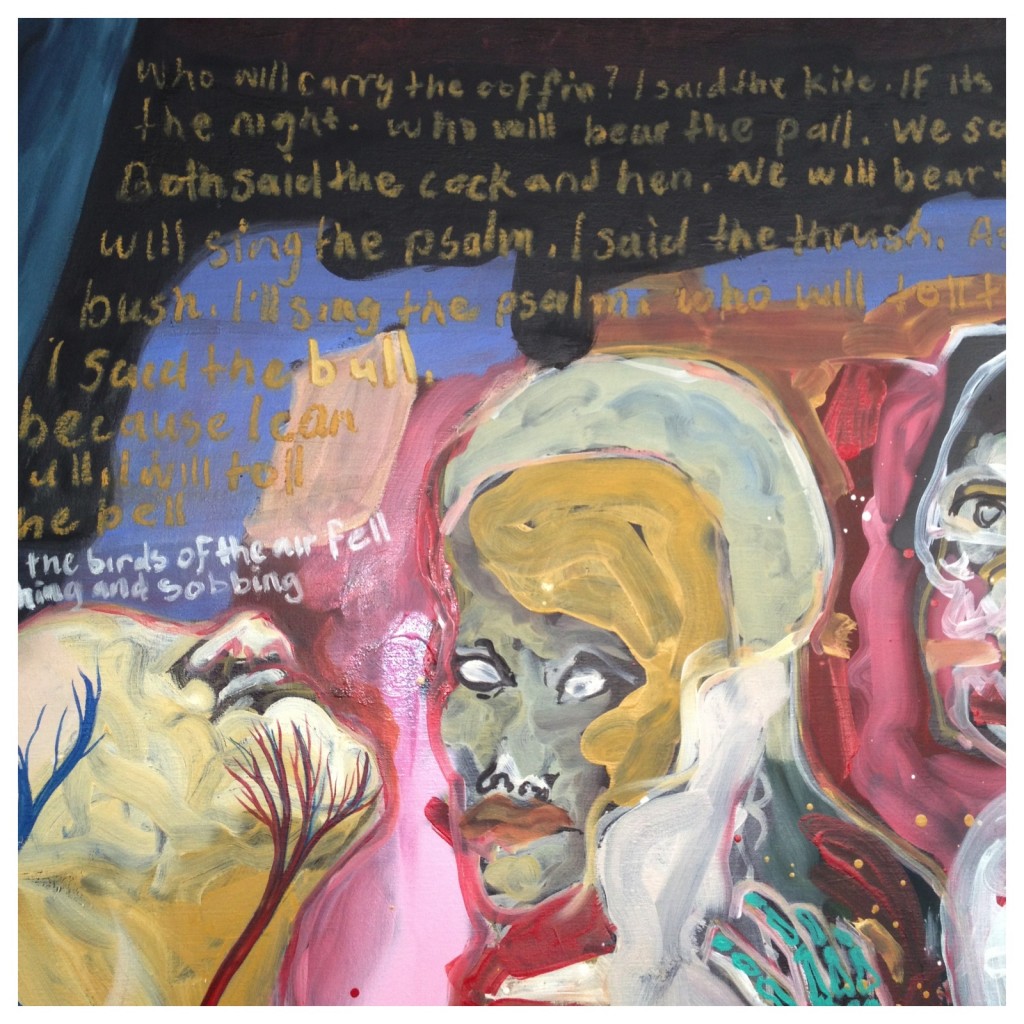 He says the initial reference for the video was Michelangelo’s Pietà (1498), considered the artist’s masterwork, the figure of Jesus cradled in his mother’s arms after the Crucifixion. “Researching I found so many similar images. The most prominent South African one was of Hector Peterson and even more recently, there was Andries Tatane. It’s kind of an iconic composition.” He mention the recent World Press Awards winner Paul Hansen’s photograph of two dead children cradled in their uncles’ arms in Gaza City.

“It’s where public violence takes place that you find that composition,” he says. “I wanted that to be essentially what tied it, the idea of public violence and the question of what is the nature of that? What is the outcome? Who are the victims?” 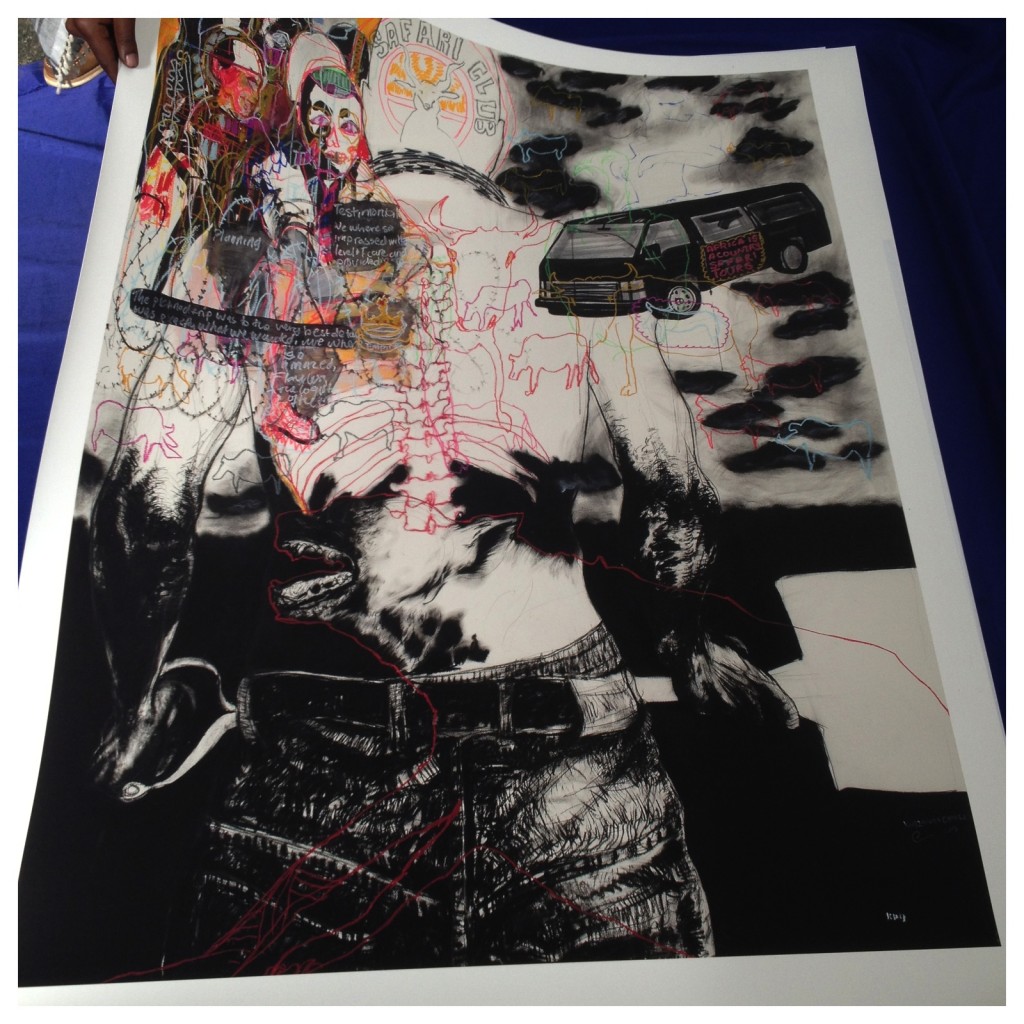 Part of it is about referencing Christ dying on the cross. “He sacrificed himself and when there is public violence there is a sense that people who pass away are sacrifices. I wanted to look at in that way.”

He does look at it in that way, rather than looking away. The 16 in the title references youth and specifically Youth Day. “So as much as we think we are censoring or protecting young people from graphic images they are part of the broadcasting and telling the story. As much as we try and filter the nature of violence it is constantly there.”

Chiurai’s work doesn’t end in the gallery. Part of this exhibition will involve distributing free posters and T-shirts to those who attend. The messages can carry beyond the walls, to mark where violence has taken place. “I am just reminding people of this. Some people do this as journalists, I do it with paintings and drawings and film.”