#186. Share the viral load. It appears that someone out there is having a whale of a time creating Hollywood scenarios for South Africa’s two most headline-hogging (mostly for the wrong reasons) politicians. My inbox is jammed. So here’s another take on the Juliob or Jacobius (our shorter answer to Brangelina) relationship.

First there was Dr Evil and mini-me then there was …

There’s an academic thesis in here about political figures and popular representations, about humour and fear, but I am not going to be the one to write it. Suffice to say it’s all kind of funny in an uncomfortable way.

See More on Jacob Zuma’s “baby dady” drama for the first take on this.

#185. Share the latest graphic doing the rounds on email.  Star Wars fans. Be afraid. Be very afraid. Well at least Darth Vader’s heavy breathing finally makes sense, perhaps a little too much. With apologies to fans and of course to Luke Skywalker.

#177. Gasp a little as Zapiro gives new meaning to “member” of Parliament. With President Jacob Zuma’s sex life firmly back on the national agenda following Sunday’s revelation (see the original article from the Sunday Times here) that he has fathered his 20th child with Sonono Khoza, daughter of soccer boss Irvin Khoza, it appears that the presidential cavalcade may need some Venter trailers to add to the minibuses that are used to transport the wives club. Travelling with four wives (I hear the sound of wedding bells) is no light matter.

I am a little uncomfortable (call that a lot) about referring to the President’s extra-curricular activities but not so squeamish as to wish that he was keeping the mouse in the house or at least practicing “no glove, no love”. If you are going to put it out there, you can’t blame the nation for noticing.

#73. Get hooked on Z News (pronounced ze news). With the Nicholson ruling having been overturned the T-Boss and JZ show is back in the headlines. Z News is the brainchild of political cartoonist Jonathan Shapiro aka Zapiro — the man Jacob Zuma’s legal team (and he needs one) might as well create templated lawyers letters for.  Only the dates and details need changing (shower head, having his way with the figure of Justice, blah blah blah etc.)The story doing the rounds is that the SABC – the public broadcaster whose last known act of imagination and daring was changing the screening times of The Bold and The Beautiful –  “commissioned” Zapiro to write a satirical news show based on his cartooning skills. END_OF_DOCUMENT_TOKEN_TO_BE_REPLACED

#38. Share cartoonist Jeremy Nell’s thoughts on how SA’s leaders will be remembered. 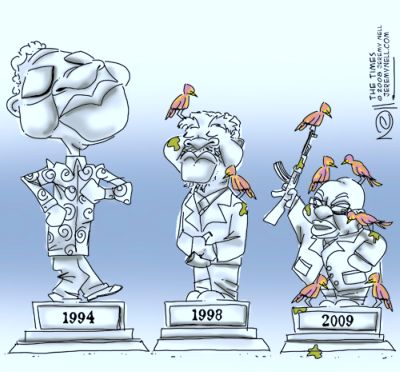 * Nell is the cartoonist for The Times newspaper. To see more of Nell’s work go to www.jeremynell.com.