#119. Watch soccer, even if the home team wasn’t sure what to do with the ball once they got it. Last night’s opening ceremony and game at Ellis Park has been endlessly dissected in hundreds of column inches so for my part – I was in the stands nicely placed behind the goalposts that sadly didn’t get much action from Bafana Bafana or Iraq, the sound of thousands of vuvuzelas like a swarm of very angry wasps buzzing in my ears.

END_OF_DOCUMENT_TOKEN_TO_BE_REPLACED

#112. Enjoy Patricia Driscoll’s mesmerising seascape — in a landlocked city where the beach is just a memory and the pavements are strewn with autumn leaves that crunch under your feet. 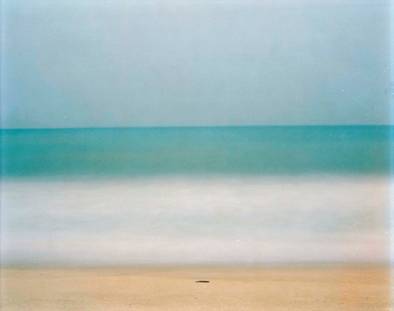 “I love shooting these seascapes. The twilight time between day and night and night and day is ambiguous and interesting. The pictures are very much contingent on natural conditions. For instance, it was raining hard in Lagos at Lekki beach. I took the photographs very early in the morning (around 4.30am) under an umbrella. The quality of the twilight was so soft and diffused that it gave the photo a distinct and unique feel”.

“The history of the beach has meaning for me. So much has happened on these shorelines: drowning, religious ceremonies and rituals, suicides, battles, crime, fun, romantic interludes and floods.  The sea washes the evidence of human activity away. The endless cycle of the sea is repeated. And my photographs mirror these loops and repetitions.” — Patricia Driscoll.

#107. Digest the sights and sounds of the Brett Kebble art collection auction. The auction, held on Thursday night, was eye-opening — not so much for the art that sold for close to R55-million, as for the patrons. Close to 1000 people seated themselves at Summer Place in dress suits and evening wear. Champagne flowed amongst plummy accents, stuffed shirts and fat cats. Ladies, and I use that term with intent, wore pearls and looked aristocratic. There were grande dames with silver bobs, lots of well-preserved blondes wearing updo’s and flaunting their jewels. The men all had good hair.

A friend later remarked “You could have heard a pin drop in Inanda on Thursday night”. The suburb, home to polo players, sundowners or “drinky-poohs”at the Country Club, was virtually vacated as the mink and manure set made their way across the road to Summer Place.

Marino Chiavelli’s legendary home was the setting. Perfect for big dreams and big money. Like Kebble, his wealth too was once legendary  (when I was a kid there was a radio advert that used to make fun of Chiavelli when he was still an A-listed celebrity that had someone speaking in an Italian accent and saying he was selling his Rolls-Royce because the ashtrays were full). And like Kebble his wealth was sadly not long-lasting.

The pre-sale hype had definitely paid off as more than 800 people registered to take part in what was touted as the “biggest auction on South African soil” by Graham of Graham’s Fine Art who strove to simulate London’s finest auction houses. Like a carefully choreographed movie set the room heaved with people, the crisp night air outside having little impact on the  rising warmth created by such a large and confined crowd. There were usherettes in black cocktail dresses, spotters and two-way radios to assist the auctioneer, 10 telephone lines in anticipation of bids from Bermuda and the Virgin Islands, big screens with live currency conversion and waves of murmering as the crowd responded to the bidding.

Lots of pageantry and spectacle. Very Joburg. The dust from this little mining camp still lingers though. You can feel it when the auctioneer needs to emphasise that the paintings are “clean”, untainted by the scandal and financial tricksiness of what Kebble left behind.

Only Daniel Craig and a director yelling “cut” were missing.

* For all the other news on the auction, click here.