Douglas previously co-produced William Kentridge’s 9 Drawings for Projection, and worked in film and TV. He came to setting up the Art Fair “through a strange series of steps” and was determined to see if he could wrest some sponsorship for an art event in a country where the big corporate money had long been earmarked for sport. The Fair was conceived of as a place where corporate South Africa and the contemporary art world should meet.
When he first started selling the idea one famous gallery owner remarked “I don’t know if anyone will come to that“.
An introduction to Paul Harris, First Rand CEO – FNB has been the Fair’s major sponsor since its inception – was the catalyst.
The challenges of holding an Art Fair in South Africa are not small. “How do you position an Art Fair in Africa?” says Douglas. For one thing there is no neighbouring art industry. Unlike in Europe, the US or South America the continent does not have a gallery system and most people’s perception of African art is that it is “craft”. The Joburg Art Fair was determined to change that – to shift the focus away from the folksy cliches of tourist art and onto contemporary work – art that makes a statement about “the time we live in and the place we live in”.
END_OF_DOCUMENT_TOKEN_TO_BE_REPLACED

#52. Don’t miss Lawrence Lemaoana’s exhibition: “Fortune Telling in Black, Red and White” at David Brodie’s Art Extra Gallery in Craighall. Brodie’s gallery is a brash young presence on the Joburg art scene, contemporary to the point of being avant-garde, a rarity in this town where the art world is generally extremely polite. A few years ago I attended the “opening” of performance artist Steven Cohen’s latest work at the Goodman Gallery. Cohen dragged himself off the floor, wearing a tutu and I think it was kudu horn boots flipping himself over onto a pommel horse while an able assistant entered from the wings and inserted a fire cracker into his ass and proceeded to light it. The audience clapped and nodded appreciatively then moved on to refill their glasses with white wine and view the rest of the exhibition. This is not a town that is easily shocked or that likes to show it. (Scroll down to pause the audio). 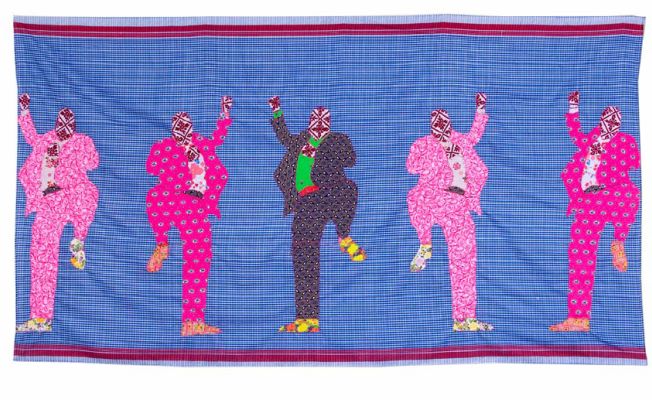