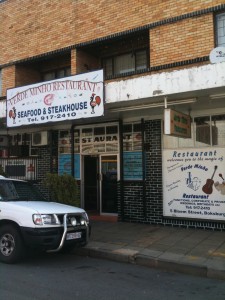 We headed for Boksburg about 25kms away to an old favourite, a Portuguese restaurant called Verde Minho. We have eaten meals there for about 15 years and I have to say it – in 15 years we have never been disappointed. The newest owner, Ricardo, is Argentinian – Buenos Aires-born – and over the seven years that he has presided over the place it has developed a more global feel. There’s a Mexican banjo-player on one wall END_OF_DOCUMENT_TOKEN_TO_BE_REPLACED

#123. Lament the passing of Ricardo Rangel. The man considered to be Mozambique’s greatest contemporary photographer died on June 11. Eleven years ago this month I first saw Rangel’s work when a friend gave me a book of African photography as a wedding present, In/Sight African Photographers, 1940 to the Present (Guggenheim). Through the book I was introduced to the work of Rangel as well as Mali’s Seydou Keita and Malick Sidibe, Cameroonian Samuel Fosso and Drum magazine’s Bob Gosani, among others.