#40. Wonder about the future of South Africa’s neighbour, Zimbabwe. Yesterday a historic power-sharing agreement was signed in Harare between Zanu PF’s Robert Mugabe and Morgan Tsvangirai, leader of the Movement for Democratic Change and of Zimbabwe (only if one takes votes into account, which Bob clearly does not).  Not to be stopped by the “details” of an election, Robert Mugabe said some very strange things including  –  in reference to SA President Thabo Mbeki’s mediator role – “I wish I was young again and proposing to girls. I would say give me some tips”. 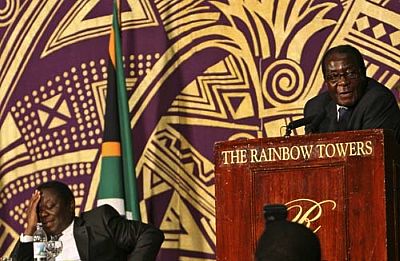 He also pointed out that “Democracy in Africa is a difficult proposition … The opposition will want to be the ruling party”.  There was more, much more and The Times reported on it all today.

Ironically this was said while he lounged on a podium  bearing the name “The Rainbow Towers” which left me wondering how long it would take for Bob to disappear in a puff of smoke and be replaced by the cackling Wicked Witch of the West. I can only venture a guess that Morgan Tsvangirai’s head in his hands disguised him mouthing “Oh Toto, we are not in Kansas anymore” while other Zimbabweans, stripped of an economic life, subjected to violence and hardship, and exiled to the four corners of the earth, heard the refrain from “Somewhere Over the Rainbow”.

In short, Zimbabwe is a tragedy in many Acts. And Robert Mugabe’s role in its downfall brings to mind a quote by Zimbabwean writer Dambudzo Marechera who saw this coming long before it did and wrote: “Where once our heroes danced, there is nothing but a hideous stain”.