#99. Give fashion a chance. The political intrigue that has dominated the week with the Mbeki plotters being out- manouevred by the Zuma plotters and the now not-so-secret tapes made public has left me seeking refuge from big news about big men with big plots, and machinations worthy of a Shakespeare production. It is apparent that as a country we have been used as the setting for an enormous battle between political ambitions and … political ambitions, making it all but impossible to choose sides.

And so I can’t help savouring the memory of Friday night — before the latest political storm broke — at  the Turbine Hall in Newtown where two very different fashion constitutiencies were brought together by a shared love of detail, stripes, and … dressing up. It was the setting for Sanlam SA Fashion Week and the showcase for the designs of Ephymol and Clive Rundle. Ephymol is the Afro-chic creation of Ephraim Molingoana  and Clive Rundle is the creation of …. yet-to-be-determined creative forces that have produced a designer whose ability to construct fantasy out of fabric is unparalleled.

It was Ephymol’s men’s range that set the room alight – the eye candy on the catwalk definitely helped, bringing smiles to even the most wizened Clive Rundle supporters in the front row. So much gorgeousness to behold — the row behind me even started ululating. 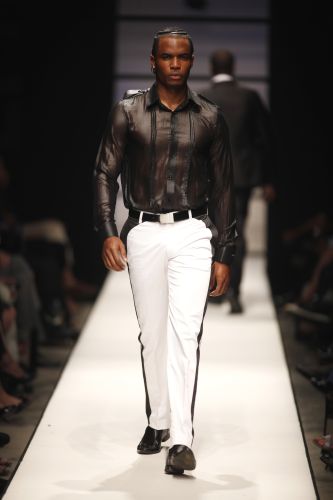 Then it was Clive Rundle’s turn — The commentary from David Attenborough’s The Life of Mammals, a nature documenary made for the BBC played in the background overlaying the sounds of Buddhist chanting (I am told it was the Dalai Llama himself). Ironically the episode Rundle chose was part one of Attenborough’s series, called “A Winning Design”. 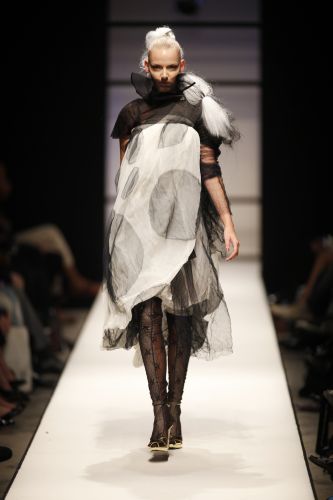 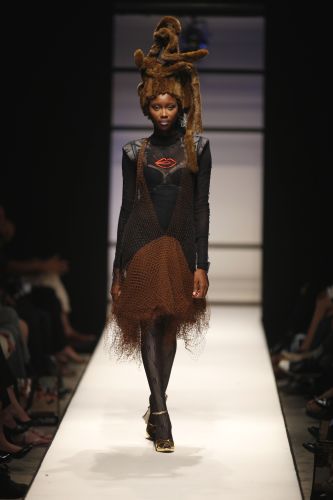 As the documentarist spoke, extolling the virtues of being a mammal, models with about a metre’s worth of ponytail moved along the catwalk  in dainty gold platforms — dressed in filmy fabrics, soft, romantic and short dresses, their underwear almost outerwear. It was understated bordello-style, sexy but subdued, French. Beautiful. With just the right amount of humour in a T-shirt worn by a model that read “The Dalai Lama loves TM” (said to be Trevor Manuel. For the back story go to The Wild Frontier).

No hidden agendas, hearts on sleeves kind of stuff. The stitching was there for all to see. Transparency. A perfect distraction. Fashion gets my vote.