#206 Nothing to do in Joburg besides become a fan – of football, Bafana Bafana, the diski, the flag, the colours, the people, the spirit, the music and even the vuvuzela (I have my earplugs ready for the opening game at Soccer City tomorrow night). It’s hard not to. Yesterday in Sandton the streets filled with thousands (they say around 185 000 to be more precise) — and even the actuaries and accountants and a few oddly dressed people that could only have come from some corporate IT department joined the throngs in gold and green to wait for Bafana Bafana. 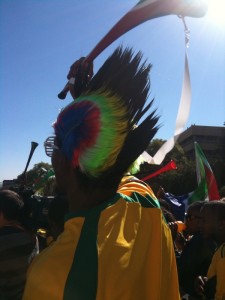 First of the Sandton Mohicans

There were a few chic lawyers dressed in black and one Mexican. I saw four Argentinean fans and plenty of kuduzelas (all the rage this season). There were tourists and journalists (I got interviewed for a Japanese newspaper and am still having second thoughts after having revealed my age to the people of Japan) and then there was a man wearing a T-shirt with an arrow pointing to his crotch and which read “Feel it. It is here!”

And it is here –and it looks set to last. The party has officially started in Joburg. 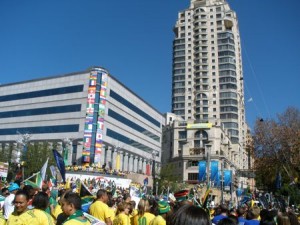 The view of Sandton's Citibank building