As is my mood I go from feeling like the poor relation to being smug about my tiny teeny carbon footprint. And when I am not feeling envious of all those who are in Cape Town for the event I start loving the idea of being at the Design Indaba Joburg simulcast – all of 10 minutes from home – at the University of Johannesburg.
Yesterday was day one of what has been billed as 72 hours of creativity. It wasn’t as much of a BIG NAME IN LIGHTS all-star line-up as I had hoped for and it was more portfolio than big ideas about design and the future but the speakers made for an interesting mix:  from American graphic designer Dana Arnett [Harley-Davidson and IBM] whose amusing video about the designer and their client – “Can you make that logo a hair bigger? … My logos are not to be read. They are to be communed with” was a morning highlight to Durban-based designer and illustrator’s Richard Hart’s brilliant bio video and great bookshelves. Hart is the disarming co-founder of disturbance studio, with a  down-to-earthy “I’m just a Durban boy” approach, complete with bangles. I particularly like these brochures designed by disturbance for various heritage trails in around his hometown (found on their website). 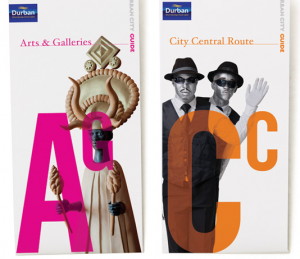 Then there was product designer  Dror Benshetrit who brought a fresh take to the classic A-frame house which he pointed out, is universally endorsed by children as representing what a house is when they are asked to draw one (loved his idea of using hydraulics inspired by garbage trucks to lift the roof on and off according to the season). I also liked his view of experience as sometimes holding good ideas back – something that has been echoed a lot. He entreated: “Don’t start with what you know. Imagine it and then see if it will work”.

Then there was the UK Design Council represented by CE David Kester asking the question of whether designers can be the new social pioneers. Their big question is  “How can design nudge social behavior and boost the economy”. But for most designers here the key theme so far is – design and their own economy, balancing the creative business, the stuff that makes design vital rather than nice to have. Entrepreneurship has also emerged strongly as a theme with many speakers eschewing the idea of a client [definitely the Day 1 dirty word]  whose approval one needs to seek in favour of pursuing a  a creative vision. 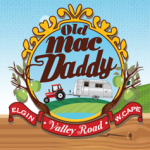 Favourites so far would have to be the ideas of the Daddy’s World crew – Jody Aufrichtig and Nicholas Ferguson – responsible for making upper Long Street in Cape Town and Woodstock’s Biscuit Mill go-to destinations. I love the look of their new luxury trailer park Old Mac Daddy in Elgin, outside of Cape Town, and the fact that two chartered accountants with an interest in commercial property have found a way to bring magic to places that lack it, and make it  commercially viable. I also liked their nod to Cape Town’s creative community and their saying that what they do is give this the space to flourish through myriad collaborations, giving designers a blank canvas on which to work. I remember enjoying a visit to one of their first hotel ventures Daddy Long Legs Art hotel on Long Street, when it first opened [the karaoke room was a big hit]. We covered it in Sunday Times Lifestyle.

Most entertaining speaker is a title that must definitelgo to Californian Jen Bilik from Knock Knock  paper products whose ethos is great design, and intelligent and amusing paper products. This is design for a particular sensibility rather than a customer, and its working well for her. Everything from PRO and CON list stickies to gifts for annoying people, you can see her quirky range here. When asked about her biggest regret – she said “My 30s” to much laughter and applause. I loved her take on “having it all” –  that perhaps its not about it happening simultaneously but rather consecutively.

There’s been lots of talk about “passion” [a new word to describe this needs to be urgently requisitioned] and finding something worth getting out of bed in the morning for [coffee is sometimes enough] and bits and pieces of wisdom about believing in yourself when no-one else does [although i would say that only people who do, do and then they don’t need to be told that, do they]. But enough of the snide stuff  – underlying a lot of these narratives is a daring, an at times enviable unshakeable self-belief  that defines many of these successful ventures. In more than one presentation speakers mentioned that they needed council/government/legal “permission” to pursue an idea and said things like “that’s why we put that sign up at 2am”.

There’s also been lots of talk about the playfulness of design and design making us happy – something brought to life in technicolour by yesterday’s closing speaker – Charlie Todd of Improv Everywhere, the person responsible for inventing such amazing feats as the big freeze at Grand Central Station and the No Pants subway ride (New-York-local pranks that have become global phenomena – the Gautrain is still smarting from the No Pants subway ride). Organising events that disrupt the everydayness of our every day is Todd’s mission and its effectiveness has now made it his career. “We cause scenes” is the motto of Improv Everywhere and its delightful.

One of his improvs involved inviting about 80 people to dress up in the uniform of Best Buy – an American retailer – and browse the story dressed  in the Best Buy uniform of Blue polo top and khaki chinos. It caused much amusement among Best Buy staff but not so much among security and management who dialled 911. The police arrived and then had to explain to store management why it’s not a crime to wear blue polo tops and chinos while shopping at Best Buy.

Todd is a social organiser and his improvs are attended by a growing community of volunteers who also write to him to suggest new gigs. Another great improv he pulled off recently was taking someone dressed as King Phillip the IV of Spain to stand next to the recently restored portrait by Velazquez at the Metropolitan Museum of Art for an autograph session. Museum visitors clamoured to be photographed with the 400-year-old subject.

And a final bit of amusement – Todd was inspired by the way in which the genre of musical theatre encourages spontaneous singing. So he tried it at a Californian food court.

You can see more of his work at Improv Everywhere. Charlie Todd’s philosophy is: just create it, and give it away, and if it’s good it will rise to the top.

For more on the Design Indaba and its associated events this weekend.