It takes a foreign sensibility to see Joburg’s suburban streets with new eyes. And I highly recommend it. On Friday morning we joined artists Susanne Kudielka and Kaspar Wimberley for a walk through Parkwood. Not your average walk, as we were encased in a cardboard Volkswagen Citi Golf. The two Stuttgart-based artists have been working as “artists-in-residence” at the Goethe-Institut for the past six weeks.  They arrived in Joburg intending to look at the theme of security. 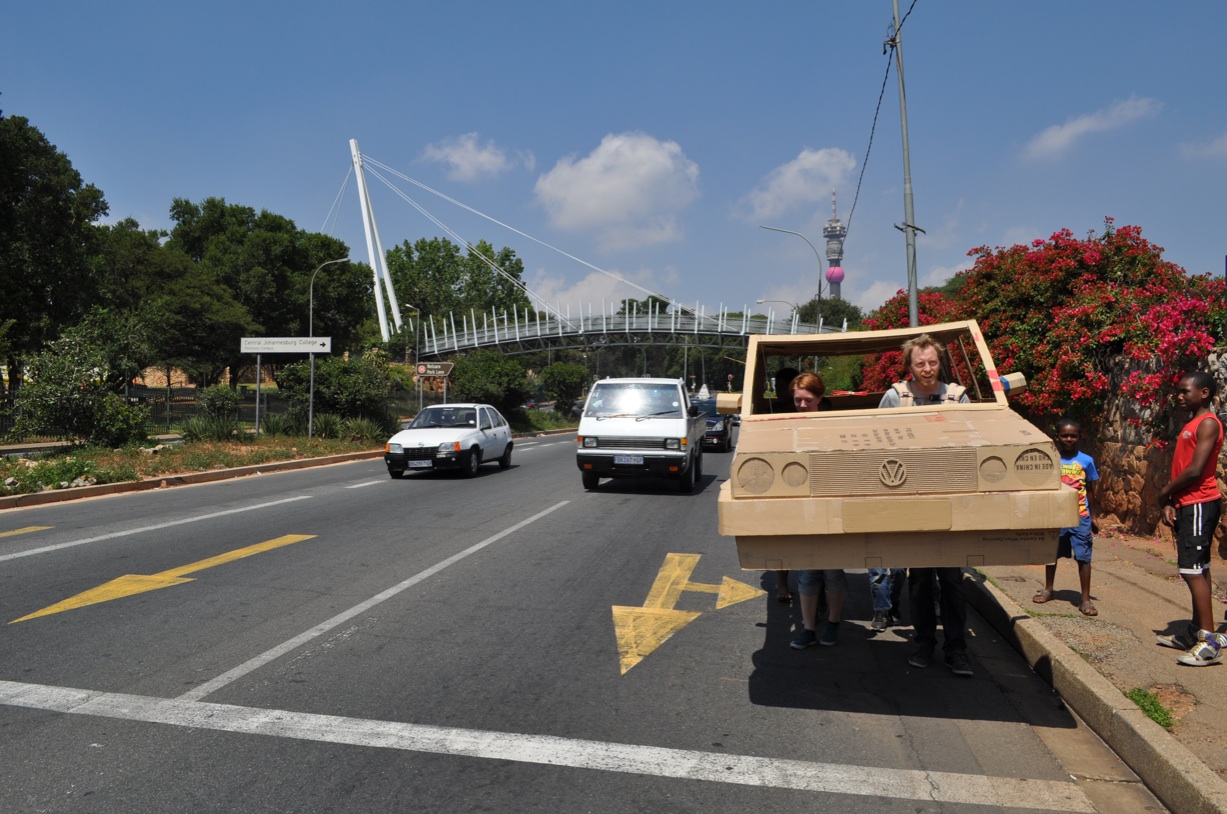 From beaded guard dogs to the fake ivy that doubles up as vicious spikes on suburb walls, they spent their time taking in the many ways and aesthetics in which people in this city protect their homes from outside invasion. Whether the threat is real or imagined… 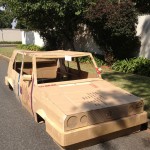 Finding a parking space in Parkwood

it struck me that a lot of time and money is spent finding creative ways to ward people off and on “creating infrastructure to control the streets”.

I have to say that I love the freedom that the Goethe-Institut’ s partner artists and collaborators are endowed with. Their programme is always fresh, ever innovative. In a world where the freedom to imagine, think and play are becoming increasingly scare they seem to really get how precious and how necessary these things are.

The artists’ work involved walking the streets – observing the habits of the more well-heeled neighborhoods. “There are so many streets where there would have been a pavement but these have been grassed over or landscaped as an extension of the garden. You can’t see the gardens from the street though so these lawn-ments are an extension of the homeowners’ personality”, say the artists. 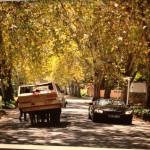 According to them – any resident can plant what they like on a pavement (bylaw) but you are meant to leave space for walkers (which many don’t). My favourite example was of the vegetable garden planted on the pavement by a security guard who had been stationed in his spot for 11 years and  allowed passersby to pick the fresh produce. There is a weird negotiation between the public and private space in this city, over-ownership you could say in some parts and dis-ownersip in others (even by the city council who should show no favour). So some residents have sculpted their pavements to make the space feel private even when it isn’t. In some ways it is also about extending the garden to keep people away from the wall.

Kudielka and Wimberley noted lots of little local idiosyncrasies – charming pathways that repel baby push chairs, alternative paths or “desire lines” created by the pedestrians rather than the the planners, and streets often made unwalkable in suburbs unused to foot traffic that is a necessary and safety-enhacing feature of city life. 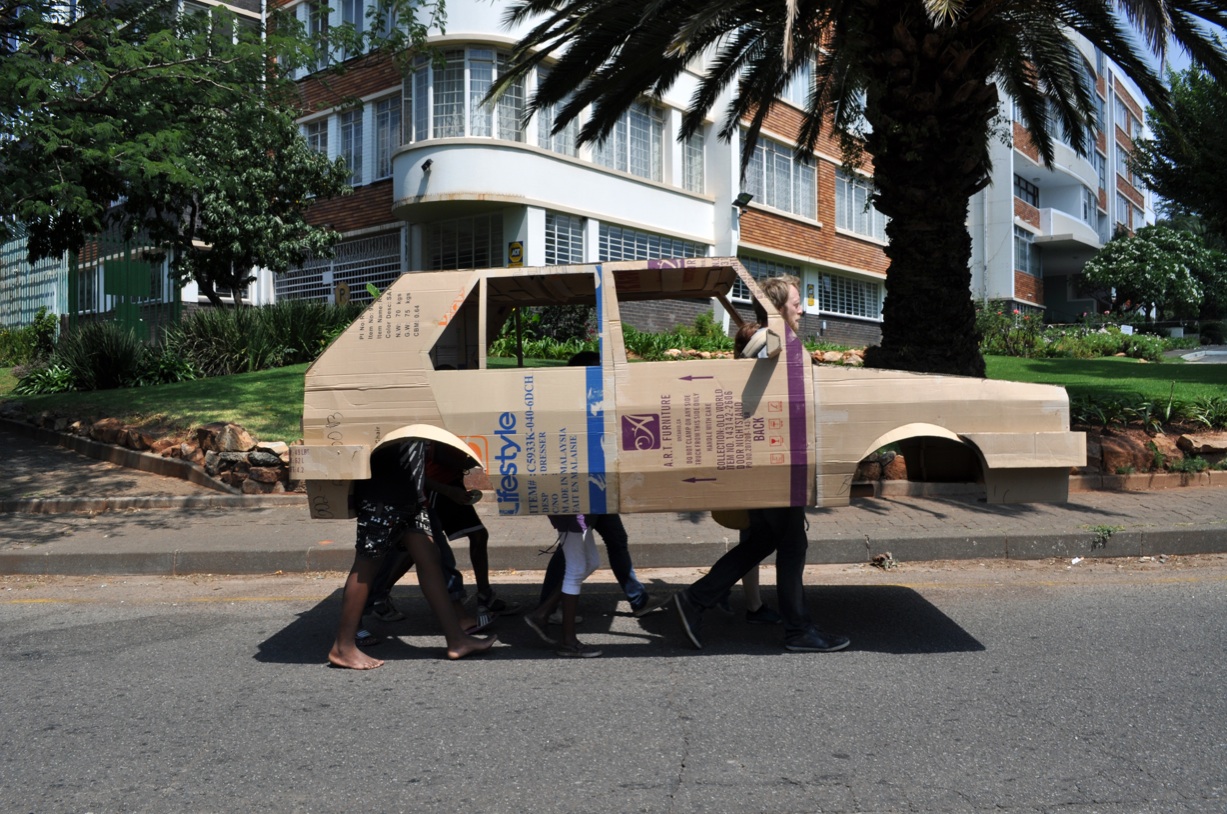 The two walked from Kensington to Parkwood, experiencing the differences in how the city’s suburbs treat their streets. As property values rose in the areas they trod human interaction diminished and suburban social isolation set in. In their cardboard Citi Golf they brought a little sense of wonder to the streets, inspiring curiosity  –  “We were two white people in a car – and we became an interaction hub”, as kids joined in and passersby wanted to take the journey with them. “We liked the idea of fragile transport”, this, in a city where those who can afford it make sure to keep their car windows tightly rolled up and avoid eye contact at traffic lights. “In Parkwood people took pictures of us, in Bertrams people joined in”. 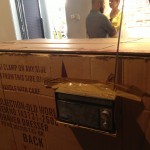 Even a cardboard car needs a radio

Their two-and-a-half-hour journey was the centre-piece of their work – one that “became a strange sightseeing trip because only 1 of the kids that joined us along the way has ever been to this area.”

On Friday they did a short walk from the Goethe-Institut into Parkwood, ending up on a green patch of lawn outside someone’s house on Worcester Road for a public picnic. A really gentle and joyful morning – as every person who passed by (besides for the two idiots who did mistake the car for a real one and actually hooted because it hadn’t made a traffic signal at the circle) stared and smiled. I loved the irony of taking a car for a walk. It makes a nice change from a barking dog.
* You can see more of the project’s photos at Cardboard Car drives Johannesburg’s Streets. See the Goethe-Institut Programme. 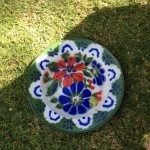 One thought on “Suburban walking in Joburg”