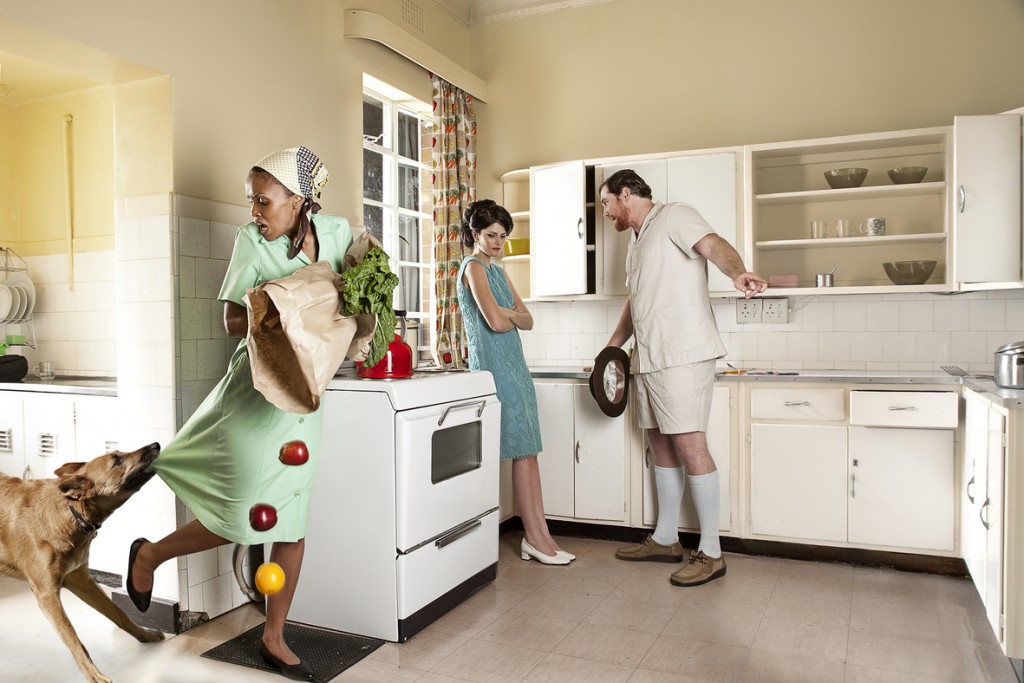 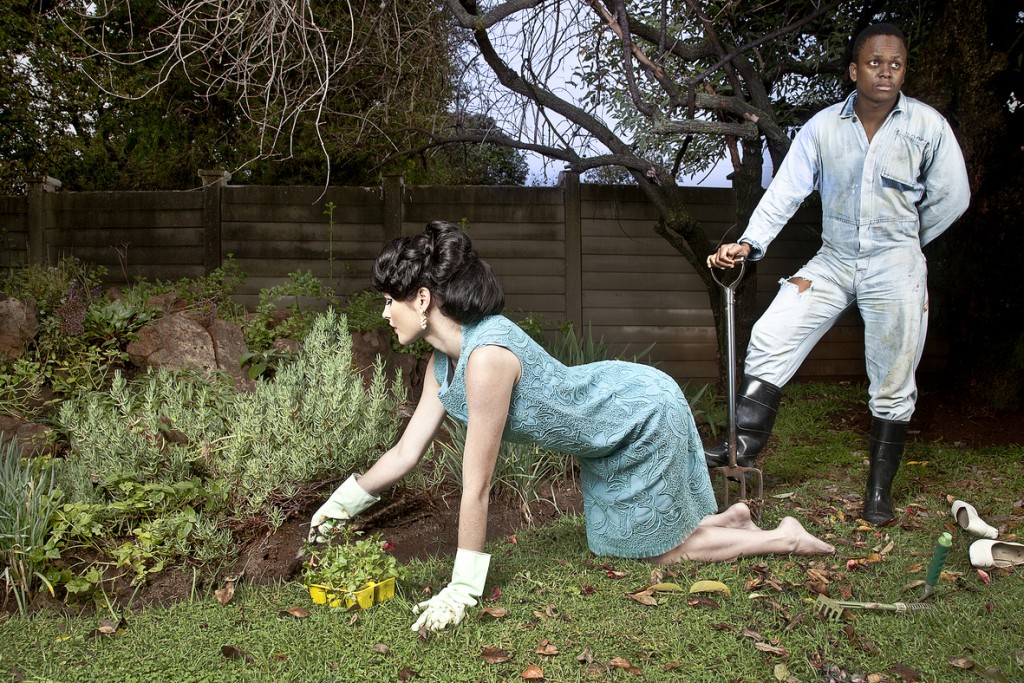 The photos tease you. Their style is high colour and glossy, calling to mind the super stylised anodyne shots you see when paging through a fashion magazine. But the scenes they portray are darkly humorous and at times, jarringly uncomfortable. The irony of forbidden love, of desire stirred by taboo and prohibition, is the backdrop. In the series Morris presents a tightly woven storyline of a white family living side by side with their black domestic servants. The domestic scenes are disturbingly familiar.

The white people in the photos  are clearly “madam’s” and “masters”, but there is a powerful sense that their privilege is more down to the way the die has been cast, than to any natural order.  In their crude layout of spacious family homes with cramped servant quarters hidden in backyards, South African homes circa 1970s mockingly replicated the upstairs and downstairs of the British manor house. Mockingly because the privileges ascribed to the people in the house were mostly unrelated to them having money or a claim to the gentry. Instead  they were simply lucky enough to be born white. Even the poorest of white people were afforded the luxury of legislated superiority. 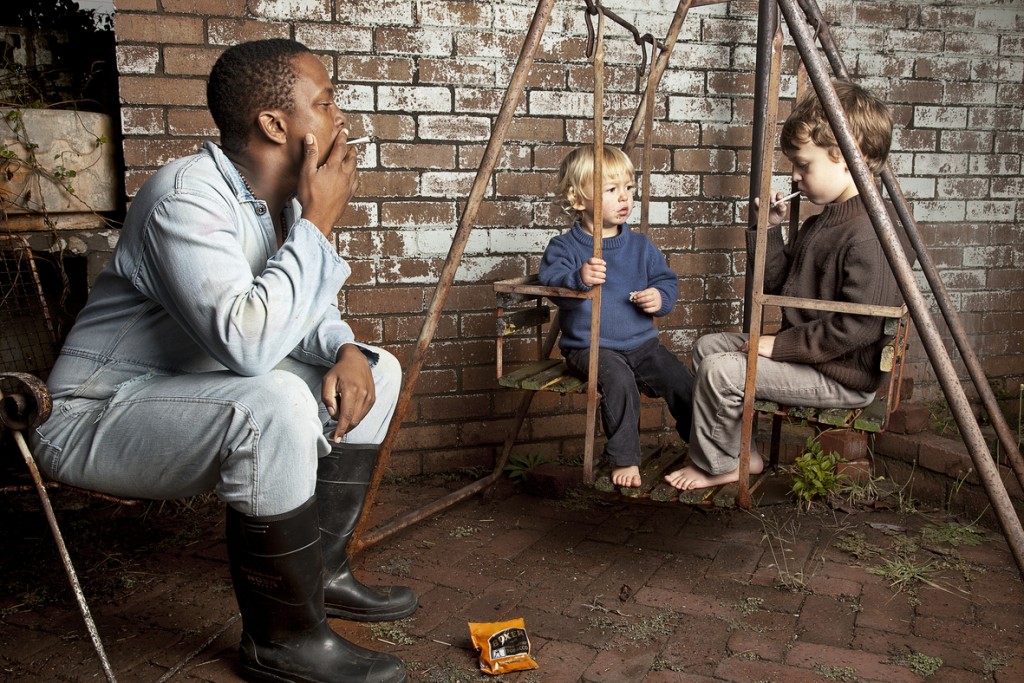 The images are playful fiction and yet they stand in as record of untold stories of the patterns of domestic relationships created by Apartheid’s proscriptions. They are beautiful images of disturbing things that an older generation would much rather forget, of household dynamics created by racial and class politics that played themselves out in the most intimate of domestic spaces. Apartheid with all of its Calvinist repression produced a funny kind of love and it’s this desire for the other that Huw takes hostage in his camera lens.

I say disturbingly familiar as they are images that belong to the past but as Morris mentions, they were inspired by the present. He says: “I was based in a studio near Greenside in Johannesburg for some time which is where I shot this series and the architecture there on the houses that hadn’t been modified was such a flashback for me. At times I would see a maid in uniform pushing a toddler down the road – the mother walking four of five steps ahead.” 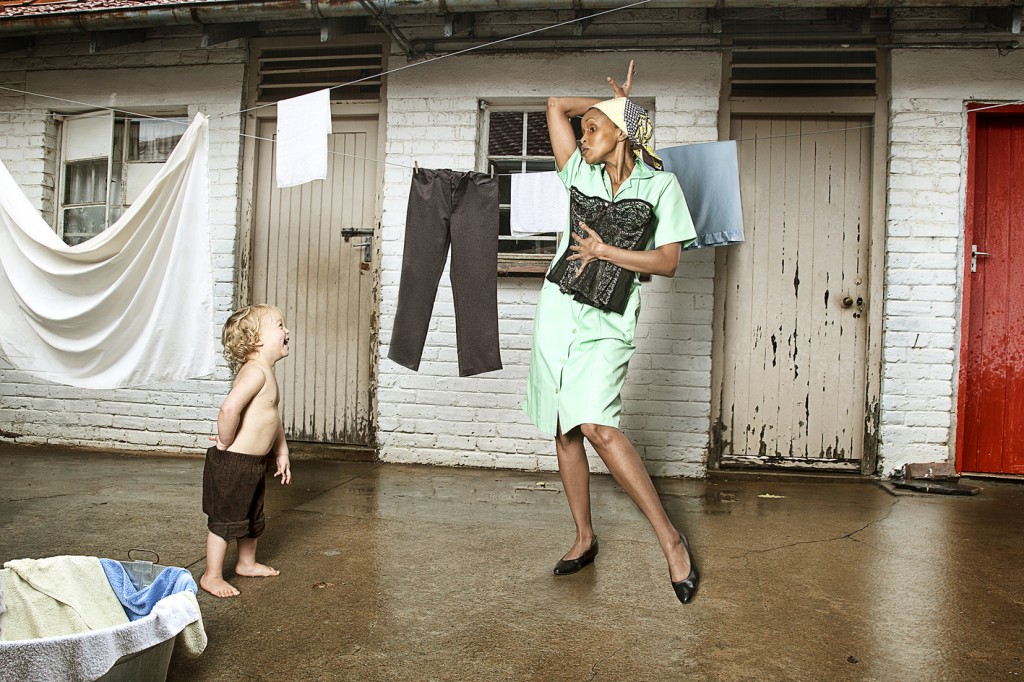 The seed of an idea planted itself. “Then I met actress Dawn Matthews on a set, and she’s such a beautiful woman that it got me thinking about the potential sexual tension that would have existed in that era and the taboo of it. Also many of my friends were raised by nannies and present but absent mums and I wanted to explore that tension. These were the two main themes that I wanted to express but I think that as a result of doing the narrative more and more have come out and it’s fairly subjective. A lot of people can identify things I never planned on.”

While Morris has a gentle approach, there’s a definitely an explosiveness to the themes he portrays. He says: “I wanted to push that big murky button particularly in regard to the main theme of taboo of interracial relationships, and then to classism within one’s home because if it does still exist we need to start addressing that. But I didn’t want to be accusatory. I think we need to be gentle with people. I think it’s less a case of hammering it onto someone’s forehead and more a case of putting your arm around them. I hope that’s what the narrative leads to … reflection.”

He says that while the work is “potentially negative”, “there’s a hope as well and that’s ultimately what I wanted to bring out in the story”. His two young sons, images of innocence and actors in the piece – provide the hope. “The hope is in the idea that these kids depicted here can look ahead 30 years and they would realize that the issues depicted in the series won’t necessarily be passed on to them.”

This is Morris’ first exhibition. He works as a commercial photographer for advertising and corporate clients. Trained in Fine Arts at Rhodes University, his work bears a stylistic resemblance to that of American photographer David La Chappelle’s, who also started out as a commercial photographer moving to fine art photography. La Chappelle’s pop culture portraits are visually impactful, popping with colour and activity and often entwined with strong social messages. These works are subversive, playing with the viewer on different levels – they are to be appreciated for being visually enticing, seductively compelling purely as images, and then to be apprehended anew to decode the social messages within them.

Morris says he shot the entire series in a day with a professional cast of models and actors – among them Matthews, James Alexander, Legend Manqele and Carien du Plessis. “It almost cheapens it to say that and everyone goes ooh aah but in reality the pre-production, the buildup and the planning was quite intense and elongated.” He says that each frame was carefully scripted, “but the magic happened on the day. It was amazing to see how the characters brought so much of the story to life because it was just graphite on paper before that.”

He has to keep reminding me that the photos are not historical, nor biographical. They are set in the now, and in some ways this removes the sting because one is clearly aware that power has shifted. But they are also small and intimate vignettes that I, as a child of the 70s, cant help but use to measure where we are, how far we have moved or haven’t.

In 11 images he explains an era of South African history visually. This is a piece of the real story, evocative of a time and place and yet also spanning into the present. He talks about how working in advertising teaches you to be loud and aggressive, to make images that stop people on highways. “I would rather whisper,” he says “ and sometimes that small voice can be just as powerful.”

* The exhibition was on at Resolution Gallery, 142 Jan Smuts Avenue, Parkwood,  a great little gallery definitely worth visiting on Rosebank/Parkwood’s gallery strip. See more about the work of Huw Morris. This piece first appeared in the Mail & Guardian newspaper.