#200 Eat red velvet cake at Wolves, the newest coffee spot on Corlett Drive. Red velvet cake comes with a history and a pedigree. It was a signature dessert at New York’s legendary Waldorf Astoria Hotel in the 1920s (or at least someone updating the post on Wikipedia thought so) and “According to a common urban legend a woman once asked for the recipe for the cake, and was billed a large amount. Indignant, she spread the recipe in a chain letter.” 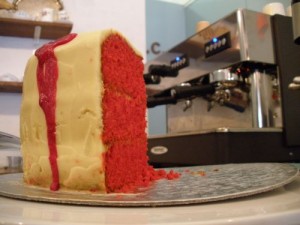 The Red Velvet cake from Wolves

It also had a starring role in the 1989 hit movie when Julia Roberts was but a child – Steel Magnolias. In the movie the cake arrived in the shape of an armadillo – a little short on looking appetising. END_OF_DOCUMENT_TOKEN_TO_BE_REPLACED

I saw this photograph on Gregor Rohrig’s blog and feel vaguely disturbed by it. END_OF_DOCUMENT_TOKEN_TO_BE_REPLACED